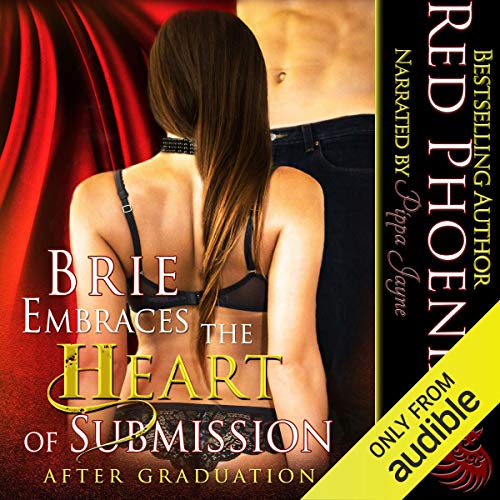 Brie Embraces the Heart of Submission

On the night of graduation, Brie Bennett offered her collar to the man who'd won her devotion during her time at the Submissive Training Center.

So begins the seductive sequel to Brie Learns the Art of Submission...

The intimate encounters Brie enjoys with her new Master are hot and deliciously challenging. On the flipside, despite her newly acquired skills, she discovers that being a sub also requires maturity, intelligence, and willing sacrifice.

Her Master has a tragic past that he has kept hidden. She is unaware that someone is waiting in the wings, plotting to return and rip his world apart. Brie has troubles of her own, including an obsessive Dom who won't let her go, parents who refuse to accept her new lifestyle, and a film that is struggling to see the light of day.

Brie's journey with her Master brings both sweet ecstasy and unbearable pain. Friendships deepen and love grows, even as her life begins to crumble around her. To survive, Brie will need the strength of a love that binds her securely - heart and soul.

Note: Adult material for age18+. This audiobook contains sexually explicit content and scenes that some listeners may find objectionable.

What listeners say about Brie Embraces the Heart of Submission

I could listen to this world for days!!!!

This didn't exactly have the same feel as book 1 but it summed up the Brie/Sir relationship well. They had ups, they had downs, they had villains, they had hero's....and all along they had a love story.

It was fascinating to listen to the inner dialogue of a submissive...I don't know how factual it would be, but this book came across as natural and plausible.

There was room at the end for a slew of follow up books and I hope this author feels compelled to visit these characters again because I would definitely purchase any one of these characters stories...well maybe not Mistress Clark...but come on, she's just a witch!

If you like kink, or the Dom/sub world give these two books a chance, I for one will for sure be listening again!

Love Brie journey and all the happiness and struggles she had you learn that their is joy as well as pain each character was well define and each one has his own secrets and struggles. Love each scenes and the doms each one with their own story. Love Pippa as narrator her voice gave all the intonation each character needs specially on Brie. Cudos!!!

Loved the story it was wonderful

This has really made me realize where my interest lye in my sexual life. Love the story and have actually even looked to see if they have schools like this available !!

it is full of love, forgiveness and most of all the hope to reach their goals love itbb

I loved this story. Brie is one lucky "sub"! I could get down on my knees for a man like Sir!!!!

True to the Lifestyle

I truly enjoyed both these books, I couldn't stop hearing the story. Beautiful story and the author kept worthy to the lifestyle.

I'm truly devoted to this book series. Sir is a fantastic character, and getting to know Thane was wonderful!
The narrator is fantastic as well - Master Grey's voice still does things to me!

Really enjoyed this book. I learned a lot too. I hope there are more books to come.

So sexy, hot and breathtaking story!!!!!

What did you love best about Brie Embraces the Heart of Submission?

I love the whole story and the passion each sexy scene has that carries you off your feet!

What other book might you compare Brie Embraces the Heart of Submission to and why?

To no one bc is not like any other book I ever read.

The whole book moved me, from the first page till the last.

The writing level and storyline are as sophisticated as a 18 year old college freshman girl's essay.

The saving grace is the good performance by the female reader. And the only reason this did not receive a one star is that the author is more knowledgeable about the kink scene and experienced in sex than a 18 year old.

What made the experience of listening to Brie Embraces the Heart of Submission the most enjoyable?

Pippa Jayne brought this brilliant book to life. She transferred you into Brie's life. Already a fan of Brie this audio experience enhanced the Brie experience!

Red Phoenix is fabulous author, she stayed true to Brie over all the stories, my fav is brie's Russian fantasy! The story has everything, your emotions run high following Brie adventures. I love the happy ending.

Have you listened to any of Pippa Jayne’s other performances? How does this one compare?

Everything I've heard her narrate I've enjoyed. She great at giving each character a voice of there own.