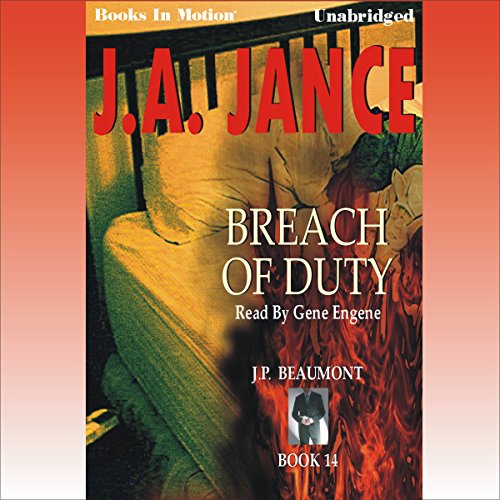 By: J. A. Jance
Narrated by: Gene Engene

Who is J. P. Beaumont? A very human Seattle police detective who is hardened but hopeful, dispirited but diligent - the kind of cop who has experienced personal tragedy but still remains faithful to his duty.

When J.P. Beaumont and his new partner, Sue Danielson, are assigned the murder of an elderly woman torched to death in her bed, Beaumont finds himself distracted by Sue's difficulties at home. Distraction soon turns to terror as Beaumont and Sue find themselves caught up in a series of events that will leave them and their carefully constructed investigation shattered. For Beaumont, nothing will ever be the same.

I am a HUGE fan of JA Jance. I love all her books. However, I am totally obsessed with the JP Beaumont series. I stumbled upon this great character(Beaumont) after all 14 books in the series had been written. The first book in the series was enough to hook me into the next 13 in short order!

I have watched JP Beaumont change work partners, love partners; drink too much, enter rehab, leave rehab -and have to deal with sobriety and all that temptation!

Jance has the ability to bring the reader (listener) into the story in such a big way. Of course, no great book can make it on audio without a terrific narrator-Gene Engene. He has an enticing, sexy, deep voice and yet he can do almost any other character. His other voices are quite believable-even the women-as hard as that is to accomplish!

I love Gene Engene and hope that he will once again appear as JP Beaumont. I believe there is still alot of life left in Beau, and I want him back. Thanks for a lovely series .

This is a fast pace nail biting story. Good descriptions of the Seattle area. This is my second book in this series by Jance and I will be looking for more.

J.A. Jance is an excellent author and matched with Gene Engene, the perfect narrator for J. P. Beaumont = the perfect book.

Really liked it ; narrator good but not as meanie

All the women, no matter what age, sound like simpering old people. And everyone of them seems to have the same edge that he gives to Beaumont. Beaumont was raised by a single mother who taught him courtesy, and good manners. He has a college education. I can't believe he is such a cranky person. Even Ralph Ames, suave and debonair, sounds like a hoodlum. He reads well, but his characterization throw things off

Good story & characters. The story moved along in an interesting way. Shamans, curses, family trechery... and JP finally drives his Porsche like it was meant to be driven.

There were multiple story lines, as there always are with J. P. Beaumont books. My least favorite, Kramer, including the extremely annoying voice the narrator uses for him.

Would you ever listen to anything by J. A. Jance again?

Maybe. If Beau stays retired or accepts the job offer at the end of this book, I might consider it.

Which character – as performed by Gene Engene – was your favorite?

I enjoy the way he portrays Beau.

Did Breach of Duty inspire you to do anything?

A nemesis is expected in murder mysteries but to make that nemesis an ass-kissing, inept, politically incorrect co-worker gets old very fast. I'm pretty much done with Kramer and the rewards he gets, book after book after book, for sneaking around, spreading rumors and being a total jerk. Get rid of him!

Where does Breach of Duty rank among all the audiobooks you’ve listened to so far?

In the case of J A Jance I think this is my favourite.

Have you listened to any of Gene Engene’s other performances? How does this one compare?

Yes I have and I really like his deep rich tones

When His partner died and Beau connected with her son.

I cannot remember ( other than real life stories ) when a book has drawn me in to this extent, I'm not afraid to say, it made me cry.