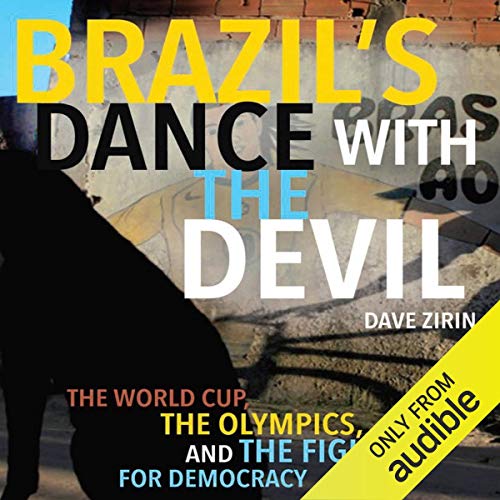 Brazil’s Dance with the Devil

The people of Brazil celebrated when it was announced that they were hosting the 20th World Cup (June 12-July 13, 2014), the world's most-viewed sporting tournament, and the 31st Summer Olympics (August 5-21, 2016). Now they are protesting in numbers the country hasn't seen in decades, with Brazilians taking to the streets to try to reclaim the sports they love but see being corrupted by powerful corporate interests, profiteering, and greed.

In this compelling new book, relying on original reporting from the most dangerous corners of Rio to the halls of power in Washington, DC, Dave Zirin examines how sports and politics are colliding in remarkable fashion in Brazil, opening up an international conversation on the culture, economics, and politics of sports. One of "50 Visionaries Who Are Changing Our World" (Utne), Dave Zirin is a columnist for The Nation, SLAM, and SI.com. He is host of Sirius XM's popular weekly show Edge of Sports Radio and a regular guest on ESPN's Outside the Lines, Democracy Now!, and on MSNBC. His previous books include The John Carlos Story and What's My Name Fool? He lives near Washington, DC.

"You have to read David Zirin to believe him, and if you read him, you will believe him." (Jack McCallum, senior writer, Sports Illustrated.
"I once said Dave Zirin was the best young sportswriter in the US. I was wrong. He's simply the best." (Robert Lipsyte)

What listeners say about Brazil’s Dance with the Devil

Great concise history of Brasil and the role of "Futebol" in Brazilian society. The narrator was good, except when it came to pronouncing any Portuguese words or phrases, of which there are many. He pronounced everything as if he were reading Spanish, even changing Portuguese words into Spanish. Considering location of the story,, the narrator should have made some effort to learn at least the basics of Portuguese pronunciation

Interesting story, but the narration can be a little annoying

I have been living for extended periods in Brazil for several years now, so am fascinated by the topic. Very interesting to hear about Brazilian politics, stratification of classes, etc.

Unfortunately the narrator tries too much - and mostly unsuccessfully - to affect a Portuguese accent when reading quotes from Brazilians, and when pronouncing Brazilian names and words. It would have been much easier to listen to had he just stuck to his own voice and changed tones.