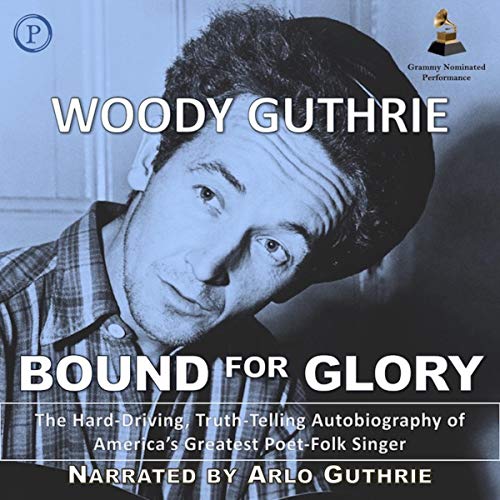 Legendary folk singer and activist Woody Guthrie left us with this funny, cynical, earthy and tragic account of his life in an Oklahoma oil-boom town, of the Depression that followed, and of his subsequent travels in, on, and under trains, in stolen cars and on his feet, rounding an America going rotten from the top downwards. During the journey of discovery that was his life, Guthrie composed and sang words and music that have become a national heritage. His songs are merely part of his legacy. Woody Guthrie left us this remarkable autobiography - it vividly brings to life both his vibrant personality and his telling an honest vision of America and its people.

This Grammy nominated recording is performed by his son, Arlo Guthrie, who like his father is known for singing songs of protest against social injustice, and for his engaging storytelling while performing those songs.

What listeners say about Bound for Glory

I loved Little Arlo reading his dad’s work. Woody Guthrie has a great knack for dialogue, and I love his story as he travels all over the USA in the 1930s. The narrative itself was just okay, nothing spectacular. This book is really more of an embellished memoir than an autobiography or anything.

Brilliant! Highly recommended. His tale give meaning to his songwriting A lighthearted tale of a man struggling through the depression times.