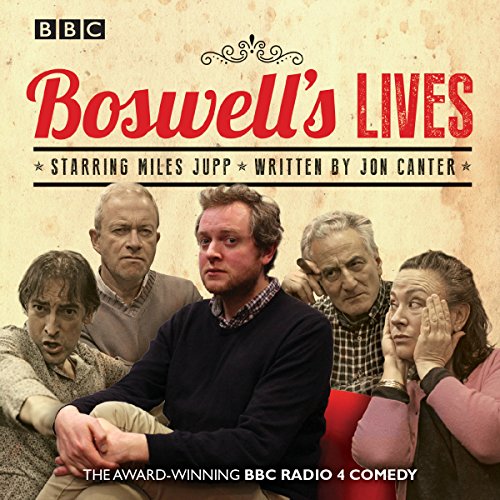 James Boswell, Dr Johnson's celebrated biographer, turns time traveller to pursue other legends to immortalise in this award-winning comedy series. Hampered by his own pomposity and self-importance, he finds that his subjects get the better of him - with hilarious consequences.

Interviewing Sigmund Freud, Boswell is wrong-footed when Freud asks all the questions and on meeting Maria Callas (and her poodle) he becomes caught up in an opera of his own making. While talking to Harold Pinter he finds himself the victim of a betrayal and Boris Johnson proves to be a formidable opponent - especially on the whiff-whaff table.

What listeners say about Boswell's Lives

Brilliant, had me in stitches

I love Miles Jupp in anything and this doesn't disappoint. Each story is great and the cast make it enjoyable. I laughed so much on my commute, I was getting worried glances. Finished it in one sitting.

Not sure why Amazon/Audible thinks that every download can be rated on "story" and wont let you move on until you do. There is no "story", that's not what it is. Just as Apple thinks people only download "songs" i suppose.

But this is very poor. For sure, Boswell's spirit and methods are nowhere. That is just a shallow device to write journalist style conversations with famous dead people. But conversations where the humour is leaden - embarrassing even. You may disagree but please sample it first to find out