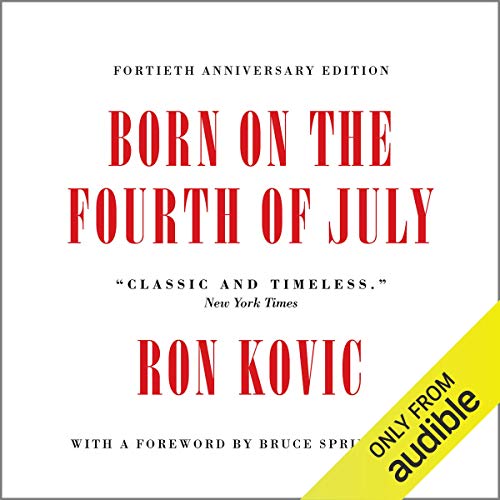 Born on the Fourth of July

Born on the Fourth of July

This New York Times best seller (more than one million copies sold) details the author's life story (portrayed by Tom Cruise in the Oliver Stone film version) - from a patriotic soldier in Vietnam, to his severe battlefield injury, to his role as the country's most outspoken anti-Vietnam War advocate, spreading his message from his wheelchair.

Read it and rejoice, read it and weep—Springsteen

This is the gold standard Viet Nam memoir that brought the troop's perspective to the forefront of the anti-war movement. Ron Kovic's immersive narration "wrote with intensity and feeling as if it was my last will and testament" still hits a nerve. He wanted to write "what it really meant to be in a war, to be shot at. Not the fantasy" and boy did he.

Nothing has ever brought me into the moment quite like this classic. The Audible edition is exceptional because of Holter Graham's urgent, painful and transforming performance. Each voice is lived, from the screams in the military hospital, to the righteous indignation of Kovic. It's devastating listening to the channelled voices of wounded men begging for their mothers.

The introduction to this new edition reminds us, the military sh-- show is not over, and the lessons of history have been deliberately ignored. It's imperative that we take time to weigh the experience of both the men and women sent into battle and the civilians stuck in the way. What is the price? Who benefits?

Kovic continues to inspire despite unabating war, he finds faith, hope, and love in a commitment to nonviolence, and shows a path from despair.

From a Vietnamese War vet

I, like so many others, could not stop listening to this book and the powerful message. As a Viet vet I look at the actions in the Middle East and say, do we have to learn this lesson again?

I was a Marine Lt. in Nam in 70-71 and every week Prez Nixon said he would bring us home... but many more lives were lost after that.

I was lucky to come home in one piece but many of my OCS buddies didn't fare so well. Ron's portrail of the horror of war are accurate but I never realized what horrors awaited the wounded warriors in the VA hospitals.

This is a powerful story that should be required reading (or listening) for all high school seniors.

I liked the story and the way it's written conveys the real struggle the author went through. War is horrible. The only thing I didn't like about the book is that at some points the author was overly repetitive about some details that contain a lot of gore in them, and repeating these without an evident need seemed like an overkill.

Unflinching Look at Horror... and Courage

Trapped. In a war. In a VA hospital. In a body that ran and played as a child.
Liberation. To speaking out. To standing up in a body that barely moves. To having courage and an unceasing love of life.
Kovic's "Born on the Fourth of July" is one of the most moving memoirs, one of the grittiest tales of war and bloodshed, one of the most humane treatments of life with, seemingly, more x's than check marks, I have ever listened to.
Told in a very compelling narrative that weaves first and third person together, as though Kovic can't believe who he used to be/who he has become, this is one horrifying yet uplifting story of a courage I can only dream about. I used to watch "Captain Kangaroo" followed by news of the Vietnam war when I was a really little kid. It was horrifying then (being told by my mom that, no, those weren't supplies leaving Vietnam, but body bags, filled with young men... with boys, really), and this memoir makes it horrifying now.
No matter what your stance on war is, this book is sure to make you realize the suffering that goes with it, is sure to make you feel more than a little ashamed, more than a little grateful.
And through it all there are brave, brave men and women like Kovic, speaking out, writing with an intense fury, telling us all about what it's really like to live, to die, to live again...
For more reviews, of all genres, check out AudiobookAccomplice

Disorganized, but full of feeling

The author has a tendency to repeat himself, and the writing can be a bit chaotic. However, this memoir is very "real". Although the text suffered from poor organization, the author writes with genuine feeling. The narrator's performance is excellent.

Ron Kovic's book is as relevant today as it was when it was first published in 1976 following the Vietnam War as we've all seen our Veterans return from Iraq and Afghanistan with similar experiences as Kovic's. It's written in a very unusual style where the past and present are intertwined. (I seen the movie starring Tom Cruise in 1989 and I thought the book was much better.) Admittedly I'm a pacifist, but I still served our country as a Hospital Corpsman in the Navy and with the Marine Corps in the 1980s during the Cold War and early War on Terror. It wasn't a popular thing to be in the military in the 1980s as our country was still healing from the wounds of the Vietnam War. I'm so thankful that our country has changed for the better today and is treating our Warfighters and Veterans so much better. Unless you served in the military, you have no idea what we Veterans went through and the sacrifices we all made (even during peacetime). As the old saying goes, "All gave some; some gave all." Maybe Ron Kovic helped change our society for the better?

This is a short and powerful memoir by Ron Kovic, a man who was paralyzed while fighting as a Marine in Vietnam. He eventually becomes a well known war protester. In this book, he tells about his youth, his Marine training, his time in Vietnam, and his postwar experience, when he turns his anger into war protest. The narrator is really good, making this book even engaging. The trauma can be hard to take at times, but I think it is an important book and worth listening to.

As a veteran of Iraq this book really hit home. Suffering from PTSD/TBI returning home was a real struggle. I was left wondering a lot "why was I even there?" I highly recommend this book to anyone wondering what it's like to serve in a combat arms role in the military and deal with it as a veteran.

Survival and honor, making the most of life.

Gut wrenching & brutally honest! Proud to be a fellow Veteran, embodiment of perseverance, and to living another day and helping others.

This is one of the most moving books I have ever read. Ron Kovic is a true American hero for coming forth to tell the truth about the Vietnam war. God bless him!