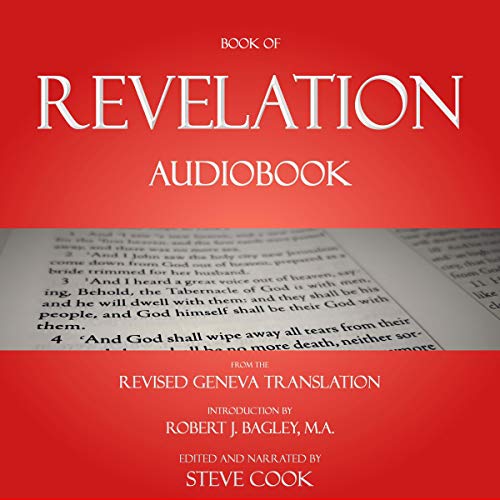 Book of Revelation Audiobook: From the Revised Geneva Translation

This is the full, uninterrupted reading of the Book of Revelation, performed by number-one best-selling faith-based narrator Steve Cook.

The word Revelation, according to Webster’s, is “[A]n act of revealing or communicating divine truth...something that is revealed by God to humans...and an apocalyptic writing addressed to early Christians of Asia Minor and included as a book in the New Testament - called also Apocalypse”.

The Apostle John was given this Revelation while he was exiled for his faith on the Island of Patmos. Legend has it that John was the only one of Jesus’ 12 original disciples (including Matthias, not Judas) who was not martyred for his faith. We can see that his living also came with the great responsibility of “penning” this book, along with several epistles and the Book of John in the New Testament.

In this stunning audiobook performance, Mr. Cook reads the text with the passion and anointing God’s holy word requires, without sacrificing professionalism or clarity. The Book of Revelation is a prophetic, supernatural look into the future of end-times and apocalyptic events; events that filmmakers have (and will) fall short of replicating in any motion picture. Hear (and “see” with your mind’s eye) how many of these the allegorical references, written roughly 2,000 years ago, are coming to pass; references like chip technology and cryptocurrency, which is poised to be used by both God and the Antichrist - Revelation 13:17.

Get ready to be taken up to heaven, to see and hear the celestial worship of God, and then back down into this apocalyptic era of events here on earth. God bless you as you listen, and enjoy!

What listeners say about Book of Revelation Audiobook: From the Revised Geneva Translation