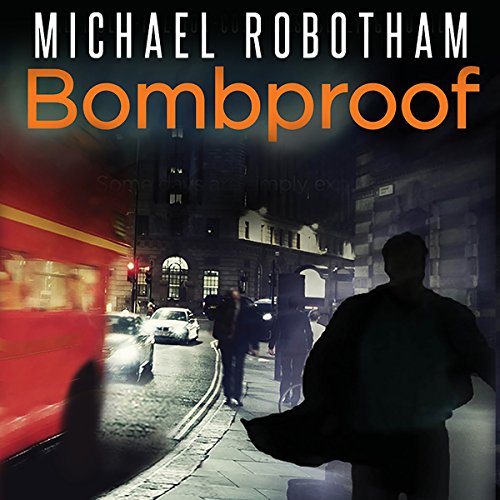 Sami Macbeth is not a master criminal. He's not even a minor one. He's not a jewel thief. He's not a safe-cracker. He's not an expert in explosives. Sami plays guitar and wants to be a rock god but keeps getting side-tracked by unforeseen circumstances.

Fifty-four hours ago Sami was released from prison. Thirty-six hours ago he slept with the woman of his dreams at the Savoy. An hour ago his train blew up. Now he's carrying a rucksack through London's West End and has turned himself into the most-wanted terrorist in the country.

Fast, funny, hip, and violent, Bombproof is a nonstop adventure full of unforgettable characters and a heartwarming hero - Sami Macbeth - a man with the uncanny ability to turn a desperate situation into a hopeless one.

I would put this up there as one of the best books Robotham has written.
Great story and narration

Great story with really well developed characters. It keeps you guessing as to how it could possibly end.

What a cracking read!!!!

I was trawling through books narrated by Sean Barrett - because he is just superb - and came across this gem by Michael Robotham. Fast paced, slick and brimming with likeable characters (courtesy of Mr Barrett’s golden tonsils), Bombproof had me from the opening paragraph to the satisfying conclusion.
And did I mention Sean Barrett?!?! Gosh this fellow should be knighted for services to the spoken word.
This book is a great adventure, set amongst London’s dirtiest operators but holding high the unlikely hero in all of us.
I’m off to buy the next Robothom...

Loved it, the best Michael Robotham yet

Totally enjoyed this book series. Well worth a listen.
Have listened twice already.
Sammy McBeth charactet has a real sense of humor.

Dissapointing for a Robotham

I found this hard work and uninspiring not sure why I battled through to the end.. sorry normally I am a huge fan.

Great twists and turns follow bad decision after bad decision. In some cases 2 wrongs do make a right, or is that 5 wrongs? From hapless to hero, you will want to follow this to the end.

I couldn't put it down!

So well written, so well read. My husband always knows when I have a good book..I dont get out of the car at journey's end!

Would you listen to Bombproof again? Why?

I've listened to this twice in three days already

What other book might you compare Bombproof to, and why?

Can't name one but anything pacey with flashes of black humour.

What does Sean Barrett bring to the story that you wouldn’t experience if you had only read the book?

Very well read. Different voices excellent,to the point where the narrator became part of the story.

Made me grin a good few times,and catch my breath.

I was so excited to see a new Michael Robotham book read by Sean Barrett since this has always been a perfect combination of plot and performance. 'Bombproof' did not provide this pleasure. Certainly, Sean Barrett can squeeze some drama out of the telephone directory but here he was pressed to do much with a badly plotted book with an unbelievable central character. Obviously Rowbotham has a host of fans (myself included) who he needs to supply with books but i would rather wait than read a book obviously written in haste without much care.

Would you try another book written by Michael Robotham or narrated by Sean Barrett?

I normally love Michael Rowbothams books and have them allHe made remarks about northern people which got my back up.Sean Barrett is as always excellent.I so looked forward to this book and had it n pre--orderIt did not measure up to his othersI miss Joe

Would you be willing to try another book from Michael Robotham? Why or why not?

yes I have his full collecton

What does Sean Barrett bring to the story that you wouldn’t experience if you had only read the book?

This is just my opinion, and others may like it but not for me, and thats the first time I felt like thatMichael a lot of people who read your books are northern and man united fansso maybe in future you lay off the insults, and yes I know this is fiction.

Love the author and narrator

Loved it. Michael has given me hours of enjoyment & Sean has become such an important part for me.

The best of your books

I loved the character of Sammi and the numerous situations that he kept getting into. The writing was really good as was the narrator.

Brilliant I devoured it in 3 days The ending was unbelievable but I love fairy tale endings Sean Barrett makes these books come alive he.s superb

I thoroughly enjoyed this story and Sean Barratt’s performance of it.
A good thriller has to pose an impossible to escape dilemma for the protagonist and then take you on a ride.
This book did that.
The characters were realistic, likeable or loathe-able where required. I cared about the outcome.
Great work!

A very enjoyable read, funny in parts IF you have a sense of humour. The main character doesn’t know wether he is coming or going, so many things going on, but still a great read and Sean Barret narrator is the Best.

One of his best!

A great read from the very beginning and a happy end, always good. Thanks Micheal !