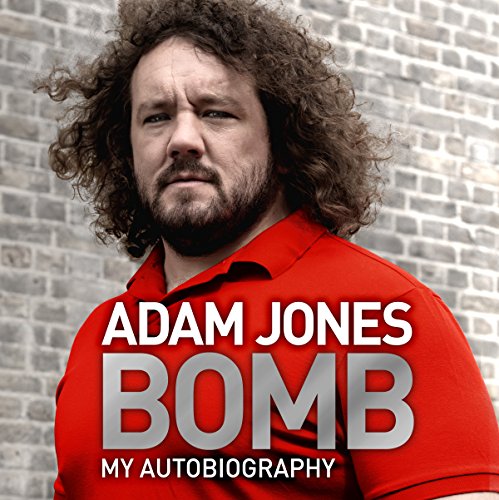 A hugely entertaining career autobiography from a true legend of Welsh rugby and a genuine cult figure.

In rugby there are the Flash Harrys and the Glory Boys: the fly-halves who run, kick and dazzle; the scrum-halves who nip and dart; the wingers who step and glide. These are the players who get the crowd on their feet, who set stadiums abuzz. But they only get to do these things because other, less glorified figures do all of the donkey work.

Adam Jones is one such figure. And for a decade he was one of the world's best. On many occasions when George North or Shane Williams was careering under the posts to score a try, and the crowd was engulfed in rapturous joy, Adam Jones would be hauling himself up from the turf, spitting blood and mud and massaging his aching neck. He hadn't scored the try, but more often than not it was his graft and strength which had made it.

This is the story of Bomb: the self-effacing manual labourer from the Swansea Valley who traded laying paving slabs for running out in some of the world's most imposing sporting citadels. He rose to the pinnacle of his sport, winning virtually everything there was to be won: Grand Slams, Six Nations Championships, Lions tours, Pro12 titles.

In a nation of rugby heroes, Adam Jones has become a legend. Only six Welshmen can say they've won three Grand Slams. He is one of them: not just as a bit-part player but as the beating heart of the most successful squad in Welsh rugby history. His was one of the first names on the team sheet. He was - literally and metaphorically - the cornerstone of this Welsh side.

In his autobiography Jones reveals exactly what goes on in the murky depths of the front row: the tricks, the techniques, the physical and psychological warfare and the mental fortitude it takes to endure in one of the hardest positions in one of the world's toughest contact sports.

What listeners say about Bomb

couldn't wait to listen to this on my daily commute. very addictive listening. great stuff.

Nice incite and a shame the way the rules changed. would've been better if he read it himself.

even more respect for one of the Welsh hair bears. Will definitely listen again. Diolch

Loved this from one of Scrums best ever Tight Hwad

I knew this would be good after listening to Joe Marler's book, he explained how he was schooled by Adam Jones in one very important match!!! This was a brilliant book and a very interesting story, Bomb is an absolute legend and was obviously right up there as World Class Tight Heads go. I am a massive fan of rugby and love all the intricacies of top level rugby from the perspective of one who was there! My only criticism would be that when I listened to Joe's book he narrated it himself, he injected a massive amount of humour into an already hilarious text. Gareth Armstrong is obviously very articulate and intelligent but this book did sound a little bit like children's story time.....

absolutely loved this book and thoroughly enjoyed reading it. legend of the game and top bloke

Was luck enough to play against him in Youth Rugby

Great player and a lovely guy! Honest as the day is long and opened my eyes about a few players!

One of my all time Favourite players! a real insight to the world of Professional Rugby told exceptionally well 👍

Laughed from start to finish. Has some cracking stories on his team mates. Highly recommend

Adam Jones was and is an icon he gives a truly honest and heartfelt account of his career, his pride at pulling on the famous red Jersey of Wales is evident throughout as well as his roots and his passion for the great sport of Rugby. The way he talks about fellow pros is always respectful and insightful and I wouod recommend this book to any rugby fan, no matter what nation you hail from.