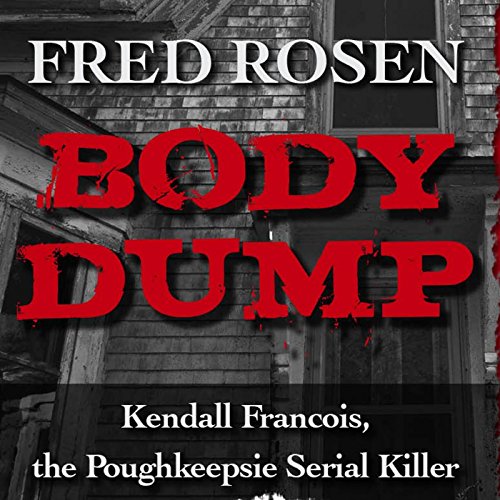 The author of the true crime classic Lobster Boy now turns his investigative skills to the chilling true story of Kendall Francois, one of the most bizarre serial sex-killers of modern times.

In October, 1996, young, pretty, and petite women began vanishing off the streets of Poughkeepsie, New York. Most were prostitutes and some were addicts. By August, 1998, the toll had reached eight, when a prostitute told police she had barely escaped being strangled by Kendall Francois, 27, a 6'4", 300-lb. middle school hall monitor whose slovenly personal hygiene had earned him the nickname "Stinky". Inside his house, the smell was worse, as investigators discovered a tangle of rotting flesh and bones - eight female corpses, almost all decomposed. Francois was sentenced to life in prison without parole.

What listeners say about Body Dump

Loved it! I'm a Poughkeepsie local and I thought it was pretty well spot on and extremely interesting. Great narration! Just a few mistakes in ponounces names of locales.

This book is unforgettable. Great detail into the mind of a monster. His capture and trial were also well documented.

I found the book informative about the case in the crimes what I was disappointed in was not knowing the current status Kendall Francois. I really enjoyed the audible book and would recommend it to any true crime reader

This is just not really worth the time. It's okay,but just okay. Narrator was not bad.

The interesting thing is that the author mentioned several times that Francois told her that her letters had no heart and that's my comment on the book. you will not gain any insight into Francpis not will you ever learn what the author's life struggles were that she supposedly had. Its a book full of words but no information about either of them.

Fine Enough, but Only Just

The author becomes caught up on two themes: That the serial killer is a very stinky fellow who lives in an even stinkier house, and that prostitutes only prostitute to feed their drug habits. And be proceeds to revisit these themes over and over and over. Otherwise, it's not a bad book.

Did Paul McClain do a good job differentiating all the characters? How?

Nah. He read the entire book in an over-the-top gritty 'cop' voice. It was kind of irritating.

Did Body Dump inspire you to do anything?

LOL. Maybe that's not the best question to ask on a book review about a serial killer???

i love you mommy😘😘😇may you rest in peace and fly high.Its messed up how they look at women ad the typical satistic and everyone pays for something even if its not upfront regardless of wgat they were human beings someones daughter mom sister its ashame how ignorant people are and a wife is the highest paid prostitute marilyn monroe people want to look down on others and nothing is free btw nary magdaline jesus stop judging and remember that dinner your paying for hotel room wedding ring dress your paying laws of attraction art of seduction fuck kendall fracois rot in hell pos

What disappointed you about Body Dump?

There was very little insight in to the mind and motives of Kendall Francois or any details about his life in jail after the killings.

Would you ever listen to anything by Fred Rosen again?

Maybe if it was about a more interesting character.

Who would you have cast as narrator instead of Paul McClain?

Nice focus on the families and victims