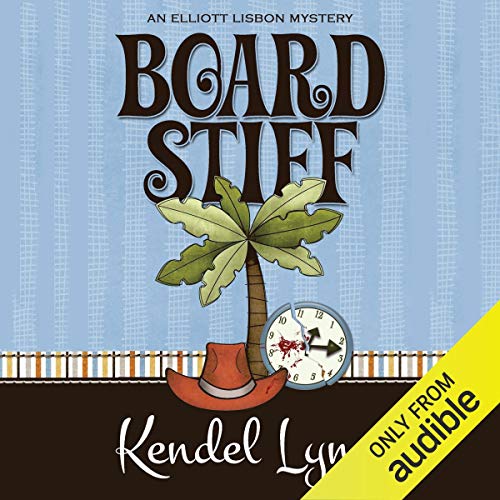 As director of the Ballantyne Foundation on Sea Pine Island, SC, Elliott Lisbon scratches her detective itch by performing discreet inquiries for Foundation donors. Usually nothing serious until Jane Hatting, Ballantyne board chair, is accused of murder. The Ballantyne's reputation tanks, Jane's headed to a jail cell, and Elliott's sexy ex is the new lieutenant in town.

Armed with moxie and her Mini Coop, Elliott uncovers a trail of blackmail schemes, gambling debts, illicit affairs, and investment scams. But the closer she gets to the truth, the more treacherous her investigation. With victims piling up faster than shells at a clambake, Elliott realizes she's next on the killer's list.

What listeners say about Board Stiff

A strong start to a new cozy mystery series

What did you love best about Board Stiff?

The story was fast moving without a lot of interludes. It also included several episodes of peeling back the onion to find a new level of plot.

I personally loved the two chefs, especially their interactions with each other. i found Elliott a bit too much to believe, but that is somewhat the nature of the beast with cozy mysteries.

While the narrator was a bit breathy and off-setting at the beginning once the story began to move along it was more that sufficient to draw me right in.

Once I was past the first couple of chapters and the characters were established, I knew i would be with them through to the end. Well deserving of it's nomination for best first novel in the 2014 Agatha awards.

Couldn’t get past the narrator

I was so excited to see how long this book was compared to what seems to be a standard 7-8 hours in this genre. However, I quickly realized that the timing was a result of how slowly the narrator spoke rather than the actual length of the story. Between that and the extreme over annunciation of every word, I was unfortunately not able to make it past the 15 minutes mark. I can’t speak to the qualities of the book or author, just the performance itself.

Board Stiff combines a quirky main character with an interesting group of supporting staff and a set of plot twists to bring about a very good story. The characters are a motley crew which all have their own set of flaw which can make them disliked at times but also makes them more human and relatable. The plot is slow moving but takes a number of twists that I didn’t see coming which made the overall story enjoyable. I’m probably not the target demographic for this story but overall I thought it was a nice little beach mystery.

Ms. Frawley does a decent job with the narration. She does a good job of switching up the characters but they all have her undertone in them so they're not totally distinct. She also pronounces her T's hard so if you tend to focus on one aspect of a narrator and have it drive you nuts this might not be the story for you.

Liked it! Want to listen to more!

Cozy mysteries are one of my favorite genres, but many are silly capers that might suit a child's story. This was humorous, but had a storyline that was layered and well paced. I won't go into the plot, that's why you listen to the book. Suffice it to say, OCD Elliot was fun to tag along with.
Narration has been a big subject in many reviews. Yes, Ms. Frawley was a bit stiff, precise in her diction and enunciation to the point that it was a little distracting. I have listened to many who are worse readers and after the first few chapters I put annoyance aside and enjoyed the well-developed cozy mystery.
I look forward to the next book in the series.

I have no idea about the story. The narrator over-pronounced "t"s, especially final ones and I didn't want to geT involved in the story and be irriTaTed by thaT all the way through. I'm all for clarity, but this felt forced.

I THINK I AM GOING TO LIKE THIS SERIES

LISBON, MADDIE, RANSOM, THE BALLENTINES, AND MORE ARE GREAT INGREDIENTS FOR INTERESTING ADVENTURES. THE 4 RATHER THSN 5 IS JUST BECAUSE THE READER IS TOO STILTED, AT TIMES, PARTICULARLY WITH "T"s. SHE JUST NEEDS TO FLOW THROUGH THOSE WORDS. SHE ISN'T A ROBOT. BUT I WILL BE BUYING THE NECT ONE.

First time with this author

Good listen.
Sometimes It was confusing but overall enjoyed it. Will purchase next book in series.

lots of laughs and the ending was unexpected...great easy read. on to the next one for me.

Enjoyed the book. Will be getting the rest of her books as well. Hope there is another in the works.

Love the story line and I also loved the characters. Can't wait for the next one in the series

It is a shame that the reader has a really annoying voice, which detracts from a reasonable story.

Nice read with a surprising outcome. Didn't see the killer coming until it was almost revealed in the storyline. Nice