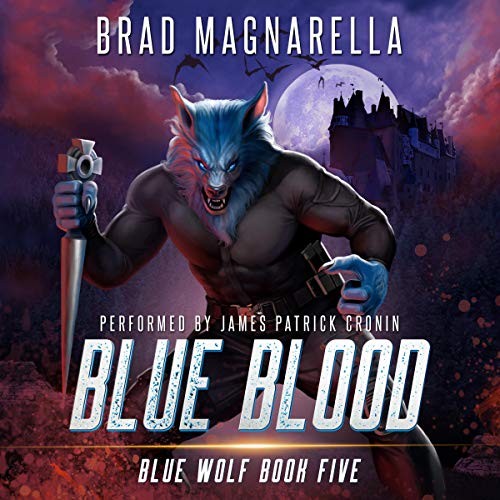 Where the dead won’t die.

Days from a cure for his lupine curse, Jason takes an urgent mission.

A medieval invader has returned to a remote corner of Eastern Europe. Backed by seven undead knights and a zombie horde, Lord Drago threatens the region’s oldest province with ghastly force.

Drochia is like nowhere the Legion team has been before - a land of brooding ruins, savage wolf packs, mass graves, and secrets that lurk as quietly as the ever-present mist. Even their cheery client seems to be hiding something.

But as the Blue Wolf wages high-caliber warfare against Lord Drago, mysteries peel away, exposing horrible truths. Is his team saving the innocent or sacrificing them to an even greater evil?

And are they too late to save themselves?

What listeners say about Blue Blood

like the rest of the series I was once again captivated by the plots ever evolving intricacies. so yes I purchased the book first. Then when the Audible version became available of course it was purchased.
James Patrick Cronin once again gave a marvelous narration. so yes five stars.

if you have made it this far in the series I'm going to assume you're probably a fan of the previous books. personally the first one why is my favorite up until now but this one might even be better. this book manages to bring all of the action and fantasy the others do while remaining surprisingly unpredictable. the story kept me engaged and wanting more at the end just as much or more than the first book. definitely worth a listen. Can't wait to see what happens next!

Blue Wolf action to the Max!!

Ancient enemies clash! The Blue Wolf is trapped in the middle with no way to win!

Jason's tactical team uses magic, technology, and the special talents of each to try and resolve hundreds of years of hatred. Their path is strewn with deception and intrigue from unexpected quarters.

Wow! Another good addition to the field of military style monster hunting.

This book has tons of undead and a “God in the making” to fight through. I like how the team prioritizes saving innocent life over all else, even their own safety.

There are a few plot twists that help elevate the story and keep your interest high.

I hope Rusty can have a deeper role in the future, I’m taking a liking to him.