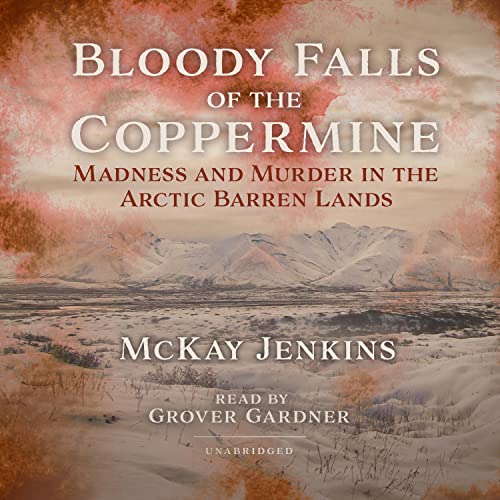 Bloody Falls of the Coppermine

In the winter of 1913, high in the Canadian Arctic, two Catholic priests set out on a dangerous mission to do what no White men had ever attempted: Reach a group of utterly isolated Eskimos and convert them. Farther and farther north the priests trudged, through a frigid and bleak country known as the Barren Lands, until they reached the place where the Coppermine River dumps into the Arctic Ocean.

Their fate, and the fate of the people they hoped to teach about God, was about to take a tragic turn. Three days after reaching their destination, the two priests were murdered, their livers removed and eaten. Suddenly, after having survived some 10,000 years with virtually no contact with people outside their remote and forbidding land, the last hunter-gatherers in North America were about to feel the full force of Western justice.

As events unfolded, one of the Arctic’s most tragic stories became one of North America’s strangest and most memorable police investigations and trials. Given the extreme remoteness of the murder site, it took nearly two years for word of the crime to reach civilization. When it did, a remarkable Canadian Mountie named Denny LaNauze led a trio of constables from the Royal Northwest Mounted Police on a 3,000-mile journey in search of the bodies and the murderers. Simply surviving so long in the Arctic would have given the team a place in history; when they returned to Edmonton with two Eskimos named Sinnisiak and Uluksuk, their work became the stuff of legend.

Newspapers trumpeted the arrival of the Eskimos, touting them as two relics of the Stone Age. During the astonishing trial that followed, the Eskimos were acquitted, despite the seating of an all-White jury. So outraged was the judge that he demanded both a retrial and a change of venue, with himself again presiding. The second time around, predictably, the Eskimos were convicted.

A near perfect parable of late colonialism, as well as a rich exploration of the differences between European Christianity and Eskimo mysticism, Jenkins’ Bloody Falls of the Coppermine possesses the intensity of true crime and the romance of wilderness adventure. Here is a clear-eyed look at what happens when two utterly alien cultures come into violent conflict.

What listeners say about Bloody Falls of the Coppermine

So so full and tedious