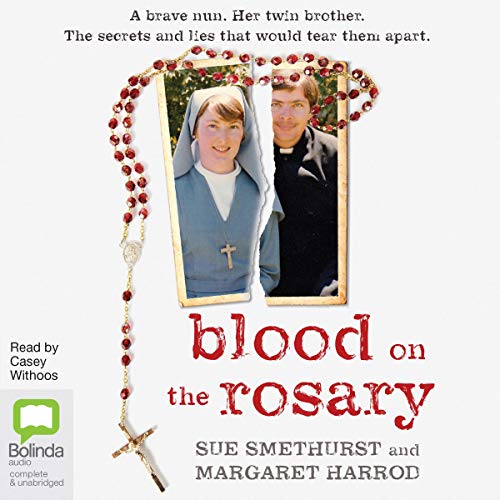 Blood on the Rosary

Blood on the Rosary

A brave nun. Her twin brother. The secrets and lies that would tear them apart.

There is a special bond that twins share, an ethereal connection that can’t be put into words.

As children they were inseparable, and at age 22, together, they gave their lives to the Catholic Church. Margaret became a nun and Michael a Salesian priest - it was the proudest day of their deeply religious parents' lives. Margaret cherishes those carefree childhood memories because the brother she adored is now in jail. Father Michael Aulsebrook pleaded guilty to multiple charges of molesting children, some as young as seven. And the unlikely whistle-blower was his courageous twin sister.

It cost Margaret everything, but she couldn’t stay silent any longer about the damage her brother was wreaking in his community. Margaret knows of that damage firsthand, having had that trust betrayed herself.

Blood on the Rosary is a heartfelt, brave and inspiring memoir that tells Margaret Harrod’s story - how she sacrificed everything she held dear in the pursuit of the truth and how she bravely fought her church and her community to bring paedophile priests, including her beloved brother, to justice.

Margaret works at my gym. I was absolutely shocked when I found out that she had written a book. I was even more shocked when I heard the words of the woman I had seen that morning working out!

This is an absolute must read for anyone. It is an incredible story from an incredibly brave woman who found her voice. It will encourage many others to find theirs and I know it already has. This story needed to be told and I’m humbled to have heard it.

Tears rolling down my face

To Margaret, I am so grateful that you have had the courage and determination to put pen to paper and write with Honesty and Truth in this book. I am only two years older than yourself and have suffered at the hands of a Catholic (trainee) Priest on an Altar's Boys Picnic. As a result of the Royal Commission into childhood sexual abuse from the Catholic Clergy - I have reported (to the Police) what happened to me when I was only 10 years old.. The Catholic's wielded a great amount of power in those days - the only power the Catholic's are left with now, is money(!)

Kudos to Margaret for sharing your story. I hope you have inspired others to speak out & support you on this journey.

This is one of the most REAL books I have ever read. This story is just a pebble in the water of an institutional syndicate that has justified, allowed and hidden sexual abuse in the church over generations and most probably still does. Being a catholic myself, I have had to question the validity of our hierarchy and feel totally betrayed by people I had always looked up to.. Thankyou Margaret for standing up and helping to create that ripple in the wàter.

Thanks to Margaret, the hidden secrets of Catholic priests have been told by a damaged, but very brave woman. Thanks to Margaret Harrod's honest and heartfelt story, although difficult to listen to at times, will help other damaged souls come forward.
Compelling, honest and truthful, this biography is worthy of 5 stars!

From a woman who’s pain should have been too much considering the horrors perpetrated upon her and then the many sad stories she witnessed and was privy to. She has told this story expertly and without exaggeration and outrage (despite being entitled to both things considering all she suffered). Grace and forgiveness permeate the pages- but not weakness. What a warrior- Margaret Harrod is a hero for he voiceless!!!!

Margaret you found your voice

Margaret, this was such a gift to readers. Thank you for sharing. I watched you on One Plus One and couldn’t wait to hear your story on audible as I drive to and from work each day. But it wasn’t read by you. You have such a raw honest authentic voice when you speak about your journey, if you write another story please narrate it yourself. :)

I can't begin to imagine what it would be like when some of the most trusting people in your life become your biggest abusers. I'm still quite speechless not only at the gruesome shocking accounts of sexual abuse that occurred but by also the courage to come out of deep buried post traumatic stress disorder to tell your story. My heart goes out to Margaret and all those who suffered at the hands of paedophile clergy ... I'm absolutely speechless at your courage to come forward and share your story. Thank you for telling us ... and I'm sorry that you had to relive memories that would have been torturous to unearth and experience again. My prayers and thoughts are with you. I went to a Marist brother Catholic boarding school and was never abused and have fond memories of my time. However after reading this book I can with hindsight look back and see where "stuff" may have happened. I can think of one person in this regard who's behaviour as I look back now was a bit creepy. I hope I'm wrong though and that nothing happened back in the 80s during my high school/college days. I hope. Male dominated institutions involving authority, public trust and respect always have an open door to abuse of some sort. But when it's the clergy ... the damage is so much more. I'm sorry for what you went through ... it's with heartfelt thanks I say thank you for sharing your story. God bless you.

What a harrowing and brave story. It is unbelievable that Margaret could survive this. She deserves everyone’s thanks for having the guts to live this life and tell her story. Really sympathetically read too. I loved it and hope people will listen to/read this very important story.

Several incorrect pronunciations . These should have been checked with the narrator before the recording was made.

I'm in awe of Margaret and her bravery to not only endure the pain of everything she went through but to also find her voice and stand up for herself and others that have been abused and then cast aside by the Catholic church. I wish her nothing but happiness, peace and love.