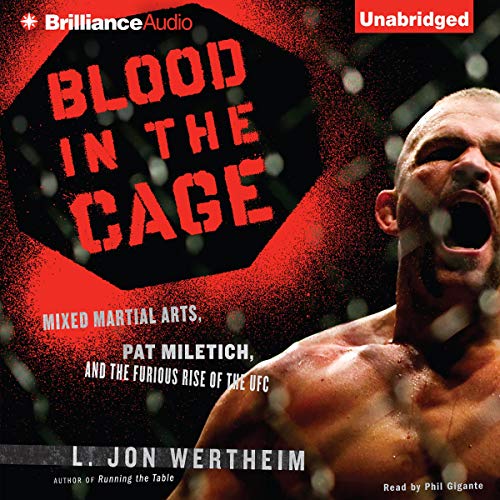 Blood in the Cage

Based on unlimited access to the Ultimate Fighting Championshipand its rival leagues, Blood in the Cage peers through the chain-link Octagon into the frighteningly seductive world of mixed martial arts, which is exploding in popularity despite resistance from every corner.

Wertheim focuses on Pat Miletich, a mixed-martial-arts pioneer and six-time UFC champion, who currently runs the most famous MMA training school in the world. Miletich has Single-handedly transformed a gritty town on the banks of the Mississippi into an unlikely hotbed for his sport. He has also transformed many an average Joe into a walking weapon of destruction.

Wertheim intertwines Miletich's own life story, by turns tragic and triumphant, with the larger story of the unholy rise of the Ultimate Fighting Championship, from its controversial, back alley roots to the fastest-growing sporting enterprise in America.

For fans of Jeff MacGregor's Sunday Money and Sam Sheridan's A Fighter's Heart, Blood in the Cage takes readers behind the scenes, right down to the mat, from a punch in the kidney to the ping of the cash register, as Wertheim brilliantly exposes the no-holds-barred reality of the blood sport for a new generation.

What listeners say about Blood in the Cage

I first became aware of this book watching Mike Straka of the FoxNews Fight Game interview the author. The book is a well covered glimpse at MMA and the most notable promotion, UFC from infancy to it's current status in global culture.

As an added bonus the book also does well to tell the tale of one of the toughest fighters in MMA history, Pat Miletich of Bettendorf, Iowa.

It was a thrill to listen to and had the entire book polished off in few short days. If you like the UFC or MMA in general this is a perfect book to better understand the history of the sport and the fighters that made it what it is today.

Wish there were more MMA books on Audibe

What made the experience of listening to Blood in the Cage the most enjoyable?

I'm a fan of MMA and I've watched the sport evolve into what it is today. I knew of Pat Millitech as a smart fighter and world class trainer, but I didn't know much about his personal background. Very inspiring story. It's always nice to hear about someone who faces tragedy and adversity, and winds up living to see a happy ending.

The guy who tried to back Pat down in a bar fight by claiming to be Pat Milliech. Also, funny to hear a semi-official version of the Gene LeBell vs Steven Segal story. I've heard so many versions of that story over the years.

Which character ??? as performed by Phil Gigante ??? was your favorite?

Gigante is a very good all-around reader, but he doesn't seem to know much about MMA or the characters. For some reason he gives Pat a southern accent and he pronounces a lot of names wrong or weird. Like pronouncing Bas Rutten as though he's a fresh water fish. ;-)

There are a dozen books by and/or about MMA fighters that would be great additions Audible. I don't know how many of them have been recorded, but there are books by or about Jens Pulver, Randy Couture, John McCarthy that I would love to be able to listen to in the car or while I work out.

Would you listen to Blood in the Cage again? Why?

I don't think I would listen to it again, however it was a great work.

the story of Pat

What does Phil Gigante bring to the story that you wouldn???t experience if you just read the book?

I thought he was great

its was well worth the time and money very entertaining.

Whether you are new to the sport, or a veteran; curious or a die hard fan, this is definitely worth the listen an a read.

Hate the narrator. Love the story. Got the app for this story alone. A lot of interesting things to learn.

Would you consider the audio edition of Blood in the Cage to be better than the print version?

can't say, I never read the printed version. This audio book was well presented though

What other book might you compare Blood in the Cage to and why?

First of it's kind that I've read

What does Phil Gigante bring to the story that you wouldn’t experience if you just read the book?

some of these reviews questions are really stupid... audible... come on man....

same as the title

If you are interested in early MMA, introduction of BJJ to the US, Pat Miletich and other UFC starts, and the rise of the UFC, this is a great listen.

This book takes you on a trip through american mma. Popular conception is that Dana White swooped in a cleaned up the sport, but that is really just revisionist history. There have been many dedicated passionate men who have spent their effort in keeping this sport alive when it was banned. As a huge fan of all mma, I loved this book. It is a history lesson that is galvanized through the narrative of Pat Miletich's life and career.

Very good and insightful into the fighers lives and dedication to their drive to be a competitor. Some good small stories (or myths) into UFC fighers.

excellent book could not stop listening untill the finish. Pat is a warrior through and through

very interesting book that sheds light on both pat military and the world's most misunderstood sport. takes the listener from the brutal, unregulated beginning to where the sport is today.