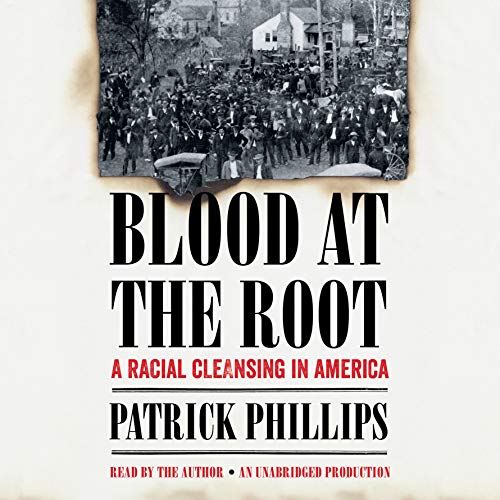 Blood at the Root

A gripping tale of racial cleansing in Forsyth County, Georgia, and a harrowing testament to the deep roots of racial violence in America.

Forsyth County, Georgia, at the turn of the 20th century was home to a large African American community that included ministers and teachers, farmers and field hands, tradesmen, servants, and children. Many black residents were poor sharecroppers, but others owned their own farms and the land on which they'd founded the county's thriving black churches.

But then in September of 1912, three young black laborers were accused of raping and murdering a white girl. One man was dragged from a jail cell and lynched on the town square, two teenagers were hung after a one-day trial, and soon bands of white "night riders" launched a coordinated campaign of arson and terror, driving all 1,098 black citizens out of the county. In the wake of the expulsions, whites harvested the crops and took over the livestock of their former neighbors and quietly laid claim to "abandoned" land. The charred ruins of homes and churches disappeared into the weeds, until the people and places of black Forsyth were forgotten.

National Book Award finalist Patrick Phillips tells Forsyth's tragic story in vivid detail and traces its long history of racial violence all the way back to antebellum Georgia. Recalling his own childhood in the 1970s and '80s, Phillips sheds light on the communal crimes of his hometown and the violent means by which locals kept Forsyth "all white" well into the 1990s.

Blood at the Root is a sweeping American tale that spans the Cherokee removals of the 1830s, the hope and promise of Reconstruction, and the crushing injustice of Forsyth's racial cleansing. With bold storytelling and lyrical prose, Phillips breaks a century-long silence and uncovers a history of racial terrorism that continues to shape America in the 21st century.

"[M]eticulously and elegantly reveals the power of white supremacy...to distort and destroy, not only lives and accomplishments, but historical memory, the law, and basic human civility." (Carol Anderson, The New York Times)

"Deeply researched and crisply written, Blood at the Root’ is an impressive and timely case study of the racial violence and historical amnesia that characterize much of American history. Phillips…is a gifted storyteller." (Matthew Delmont, The Boston Globe)

What listeners say about Blood at the Root

when is white history month?

I just finished the book, "Blood at the Root - A Racial Cleansing in America" by Patrick Phillips. It's the history of events in Forsyth County, Georgia, in 1912.

In September of that year, a young and beautiful white woman was found brutally beaten and raped. A young black man was arrested, then lynched in the town square, based on the evidence that he lived nearby and had been seen in the area where the woman was found. Not satisfied with the lynching, 2 more teenagers were arrested and convicted and executed at a public hanging enjoyed by more than 5000 of Forsyth County's citizens who came for the day with their children and picnic baskets.

Not satisfied with the lynching and executions, the white citizens of Forsyth County set about a series of "night rides", shootings, burnings and bombings, intent on driving Forsyth County's 1100 black residents out of the county.

Not content with driving the blacks out, whites then quietly absorbed the land and property of the 1100 mostly farmers who had been forced to leave.

For the next several decades, this pattern of violence was repeated again and again whenever any unaware black person happened to wander into the county. In 1987, when a civil rights march was planned to remember the 75th anniversary of the ethnic cleansing of Forsyth County, white citizens once again erupted in a riot of violence and hatred.

Today, Forsyth County has a small black population, and larger Latino and Asian communities, and has become an affluent, peaceful suburb of Atlanta. In the town square there's still a statue of local Confederate hero and adamant white supremacist, Hiram Parks Bell. There's no memorial to the hundreds of poor blacks who were beaten, raped, burned, lynched, and driven out in the decades after Hiram Bell's war, no real memorial to the real history of the county.

And of course, this wasn't an isolated event. Similar racial cleansing took place all over the country. The pattern is always the same - a crime, a scapegoat, mob violence, expulsion, then finally, possession of land and property.

Last month I saw a meme in a Facebook post from a friend of a friend with the tagline "100% white, 100% proud". The text of the meme was the question, "when is white history month?"

White history month is every month. And I've got your history right here.

must read - especially with trump. ascension. Helps clarify the social base for fascism in this country. its up to us to stop it

The details and story telling were phenomenal, truly vivid scenes painted. My heart breaks for those that had to endure the racism and bigotry in Forsyth County. I’m glad that this historical and important story of our nation has been shared and we can equip ourselves with knowledge and how to not repeat the mistakes of our past.

Its about a past time that is gone by. This was necessary for African American History class. It is definitely a beginner to understand what the past was like.

This was hard to follow as an audio book. I wouldn’t recommend listening to it.

Patrick Phillips’ memoir is an excellent documentation of systemic racism that allowed for the lynching and exile of African-Americans from Forsyth county Ga. This book should be required reading for all Americans. It would have been better if Phillips personalized the book more. Phillips hastily and awkwardly glanced over his family’s white-flight from Atlanta during the 19070s, not realizing that small actions like those lead to larger ones like those of the mop or even to what Mr. Crow(e) did during the 1980s. Despite those weaknesses, the book is well researched and written.

Although this certainly is not a “feel good” book, it should be required reading for all Americans to understand and learn from our history of racism and discrimination.

Should be required reading

Beautifully written, this tale deftly mixes thoroughly researched history of the expulsion of black residents from Forsyth County, Georgia, in 1912, with the author’s own experience of growing up there in the 1970’s and ‘80’s and witnessing firsthand the violent threats from furious whites when Hosea Williams led a series of peaceful protest marches there beginning in 1987. Angry white supremacists got away with murder, rape, arson and wholesale theft tacitly okayed by the town’s so-called leading citizens, some of whom actively participated. To this day, all traces of the violence are buried and many deny it ever happened, lest they be forced to make reparations to the descendants of those they dispossessed. We must learn this history and teach it to our children. We must never forget the brutality that underlies claims of white supremacy. Remember: the Nazis learned about racial purity from the American South.

I was very happy to get this detailed accounting of what happened in Forsyth county to my (Kellogg) family ancestors. I learned of these happenings over the years through elders in our family, however, I had never heard the stories as thoroughly and painfully laid out in this book. Thank you. This book is now a family heirloom.

It was a great book and the writer kept you engaged. The way my mind works and how he vividly told the history of the town, I felt as if I was in the expelled group of people..