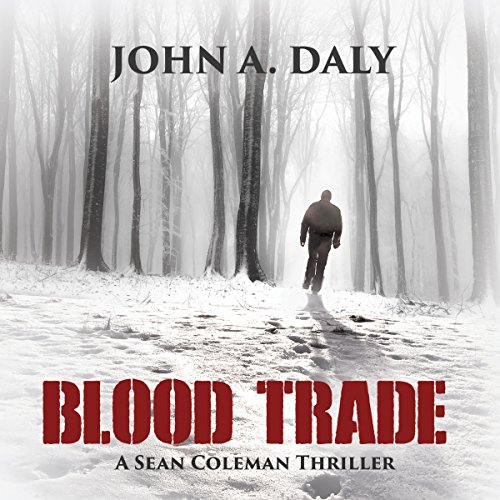 By: John A. Daly
Narrated by: Shawn Compton

"Some writers are thoughtful. Some have style. John Daly has both. When I read his work, it's time well spent." (Bernard Goldberg, New York Times number one best-selling author of Bias)

Sean Coleman is back in the latest thriller from John A. Daly, set in the mountains of Winston, Colorado.

Six months after the murder of his uncle, Sean is trying to get his life together. He's stopped drinking, he's taking better care of himself, and he's working hard to keep a fledgling security business afloat. At a blood plasma bank Sean frequents to earn extra income, he meets the distraught relative of Andrew Carson, a man who went missing weeks earlier on the other side of the state, with a pool of blood in the snowy driveway of his home as the only clue to the man's fate. Sean decides to help in the search for Carson and quickly finds himself immersed in a world of deception, desperation, and danger - a world in which nothing is what it seems and few can get out of with their lives.

I received the audiobook free in exchange for an honest review.

I really enjoyed this book. Sean Coleman is the town bad boy. A troublemaker. And he a bit of a private investigator. He becomes interested in a nurse at the local blood clinic when he goes to give plasma, and learns that her uncle has disappeared. In an attempt to impress her, he decides to see if he can find out what happened to the man.

Meanwhile, his brother-in-law, the local sheriff, is concerned about the brother of a criminal he killed coming after him for revenge. When Sean disappears while looking into the case of the missing uncle, the sheriff goes looking for Sean.

The story has quite a few twists and turns that made this an intriguing listen, and kept me guessing as to what was going to happen. Good writing style by the author.

The narrator, Shawn Compton has an easy voice to listen to, and did an excellent job of narration.

kept it interesting through the whole book.

I really enjoyed the characters. especially the main character. was awesome to see where he came from and how he was changing his life.
definitely will listen more from the series.
the narrator had an awesome voice to listen to definitely was a good one to fall asleep to.

A man driving home on a near empty road stops to help when he sees a car has recently gone over the side of a steep hill. He goes missing but is not found despite intensive searches. Shortly after, miles away, Sean Coleman also mysteriously disappeares, taken by intruders at his home. Sean had been a drunk, a bit of a troublemaker, but since the death of his beloved uncle six months before, he'd been trying to get his life into order, no longer drinking and attempting to keep the small business he'd been left solvent. The Chief of Police was married to his sister but the pair did not have an easy relationship. Garry, however, fears that his brother in law might have fallen prey to a Mexican gangster who had vowed retribution after the policeman killed his brother. Other attacks had already been made on another close associate.

This is a story of interwoven plot and relationships. Two main protagonist - Sean and Garry - and neither are typical hero types, both suffering from anger issues, one a by-the-book proponent, the other much more go with the flow personality. Characterisation is good, the surrounding countryside atmospherically bleak and snow covered. Plenty of action, especially as the story progresses, and blood. The ending is dynamic, if a little far fetched (but suspension of disbelief can just about stretch that far), leaving a pleasant feeling of completeness.

Although a well woven plot line, it is narrator Shawn Compton who, at least for this reader, fully brought the book to life. His pleasant sounding voice is warm, well articulated and he has a full understanding of the story. The character dialogue is well differentiated, with full expression, pace following the text. His reading carries the story forward, adding interest and depth.

I am grateful to the rights holder of Blood trade who, at my request, freely gifted me a complimentary copy, via Audiobook Boom. Thank you. This is the second book in the series and, although reference is made to earlier incidents which must have occured in book one, this story works perfectly well as a stand alone. It was very enjoyable, with emotionally complex characters and more seperate strands than many thrillers, making it both exciting and intriguing. I look forward to further Sean Coleman stories. Recommended.

John A Daly wrote a thrilling and thought provoking book. I have always been drawn to medical thrillers and this one did not disappoint . From the very beginning I was pulled into the story. The story is full of action, intense moments, and great imagery. The narration fit it perfectly. This is the second book in a series and very much a standalone listen. Without giving away spoilers, I thought the ending was spectacular. I requested this review copy audiobook and have voluntarily written this review. Shawn Compton performed this book perfectly. I loved the distinguished voices he gave the various characters. I would definitely listen to more books by this author and narrator.