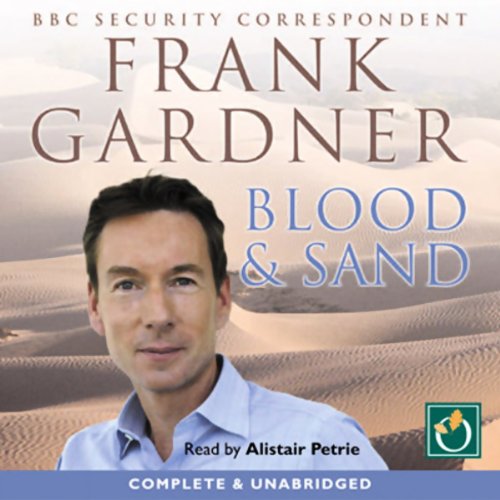 On June 6th 2004, in a quiet suburb of Riyadh, BBC security correspondent Frank Gardner and cameraman Simon Cumbers were filming a programme on al-Qaeda in Saudi Arabia when they were ambushed by Islamic gunmen. Simon was killed outright. Frank was shot and lay pleading for his life. A figure pumped four more bullets into his body at point blank range. Against all the odds, he survived. This is the remarkable account of his agonising journey to where he is today.
© Frank Gardner; (P)Oakhill Publishing Ltd

"[Gardner's] terrible experience only makes his analysis all the more telling." ( Evening Standard)
"He paints his love affair with the Middle East in vivid terms. His struggle with paraplegia as a result of his wounds has not diminished his affection for the area." ( The Herald)

Consummately well read, the book grabs you from the first scene - the shooting of Frank Gardner and his cameraman in Saudi Arabia. There are many other almost equally impactful passages, especially near the end of the book when Gardner describes, unsparingly but always with great courage, his medical treatment and the effects of the shooting on his life. However, equally valuable is the picture he paints of the Middle East, depictions of Arab countries and cultures generally unfamiliar to Westerners which he gained access by his fluency in Arabic and his thirst to know and experience them as much as possible from the inside.

Gardner ends his book hoping he may have contributed in some measure to a wider appreciation and understanding of the Arab world by these 'insider' portraits, and personally I felt he had opened windows and illuminated ideas which previously I had only dimly considered - in connection with spinal injury as well as with the Middle East. It is an absorbing, many-facetted book which I totally recommend.

wether or not you listen/watch the news, this book is enthralling, the information is absorbed without realisation that you might have actually learnt something!.
Informative without being boring.
The narrator is well spoken, no stumbling over words, easy to listen to.
In short, a really good listen

An immensely enjoyable listen. Frank, a feature of our TV news here in the UK, gives an interesting account of his early life, education and travels in the near east and north Africa, moving on to his banking career in Bahrain, before becoming a freelance journalist, BBC World journalist and eventually assuming his current role as BBC Security Correspondent.

If you have seen Frank on the TV you will be aware that he has a military bearing; indeed, this is because he has had a military career in the Army Reserve. Strangely, there is not one mention of this as far as I recall in the whole book.

The account of his brutal shooting in Riyadh and being left for dead (which the book opens with) and of his recovery and rehabilitation (which the book ends with) is very moving and the honesty of his attitude towards it refreshing. He is not traumatised by being shot (in a modern world where many are increasingly 'traumatised' by the slightest thing) but he rails against his disability and refuses for a long time to accept the severity of his condition.

Perhaps slightly disappointing though is his analysis (or lack of it) of what was going on with al-Qaeda with its shadowy CIA funded past and (contemporary with his shooting) Saudi funded present. Perhaps he is in a difficult position as he needs visas for his job and to be able to secure interviews but this is an area regrettably unexplored in his book.

Nevertheless, a brave man who has lived a fascinating life (thus far) and who is able to write about it with panache.

Will be listening again

Have admired Frank’s balanced and carefully analysed reports on the Arab world for a long time, so this was a “must listen” for me. I will be listening to it again! His life story is full of colour and interest and his life before he was shot was worth hearing on its own merit ...today’s young backpackers seem tame by comparison! But his anecdotes about the ordinary folk who opened their homes and hearts to him on his travels should be compulsory reading for anybody wanting to understand other cultures. Much of the book follows his experiences post shooting. Frank’s honesty about all that happened to him and all the emotions he experienced during recovery; his insights into adjusting emotionally and physically to becoming a paraplegic; his grappling with bereavement for his fellow journalist and his sharing of the impact of it all on his own family make this book well worth reading by anybody who is or has experienced any similar events in their own life. But for me, as someone of Christian faith, I found his comments on those who live their own faith genuinely -as opposed to those who warp faith into evil - were particularly insightful and thought provoking. A must read for all “people of the Book”.

I loved this book, it was a pleasure to listen too - the story was harrowing in places but funny in others. A great mixture, entertaining, harrowing and informative. All in all - well done and congrats.

this is not all about the shooting there is a whole life journey that is so full and varied from the life most of us lead. the caricator and the honesty of the man is amazing, a true role model

An excellent listen. Really makes you think about when you are lucky and when you are unlucky.
Very well narrated.

A great read (listen?). The narrative is both compelling as an autobiography and full of information which helps those unfamiliar with the regions and individuals he describes to build up a clear picture of places, events and personalities.
I listen to audiobooks in the car and often found myself deliberately taking the long route so that I could listen to more of this book on my trips!
The dedicated 'arabist' may find that some of the mis-pronunciation of arabic words names and places grates occasionally but overall this is not a reason for putting this on your 'must have' list.

how can you not love the cut of this man's jib?! enlightening, informative, shocking, funny, brave, heartfelt and utterly inspirational. I've seen him talk and he has such charisma - this transcends from the page too. it's a great book and the narrator is alsovery good . Buy it and you'll not regret a minute.

Having been lucky enough to spend some years in Egypt in the early '00s this book brings back such wonderful memories... Very authentic and definitely a good evaluation of the Egyptian generosity and openness to friendly, interested foreigners back then... My colloquial Arabic is not based on a learning of high Arabic and is almost forgotten now through disuse but stirred restlessly hearing the words used here.... I am sad that anyone is led to believe bad things of Islam because of the few extremists who perpetrate these acts of pure barbarism upon fellow humans.... A very poignant and direct book which is extremely well narrated and very much worth listening to.... Thank you Frank Gardner for putting your experiences on paper... I wish all the happiness you deserve Sir