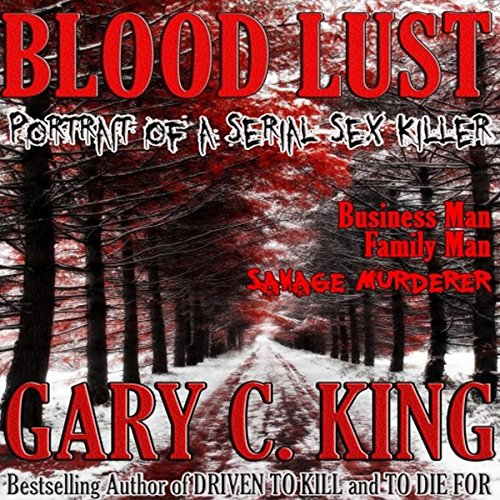 In this riveting true crime book, "The Man Who Loved to Kill Women" - Dayton Leroy Rogers - was known in Portland, Oregon, as a respected businessman and devoted husband and father. But at night he abducted women, forced them into sadistic bondage games, and thrilled in their pain, terror, and mutilation. His murderous spree was stopped only after, in plain view, he slashed to death his final victim...and when a hunter accidentally stumbled onto the burial grounds of seven other women Rogers had killed one-by-one in the depths of the Molalla Forest did police realize they were dealing with a serial killer whose bloodlust knew no bounds. This is the shocking true story of the horrifying crimes, capture, and conviction of Dayton Leroy Rogers, Oregon's mild-mannered businessman by day - vicious serial killer by night.

What listeners say about Blood Lust

Another good, yet disturbing book by Gary C King!

Where does Blood Lust rank among all the audiobooks you’ve listened to so far?

This was one of the most disturbing books I've listened to.

What was one of the most memorable moments of Blood Lust?

One of the murders was especially gruesome.

Yes, it was as interesting as it was disturbing. I wanted to find out how he was caught.

Gary's books are always full of detail and answer most of the questions about the killer and the crimes. I am rarely left wondering about anything but how someone can commit such horrible crimes. Even though he gives a lot of background on the killers and how they become the way they are, it is still hard to understand how someone could be so evil. I was voluntarily provided this free review copy audiobook by the author, narrator, or publisher.

When I can't put a book down (in my case, the Kindle), it means the story was fantastic. I love this genre and this was a interweaving, and intricaling detailed story.
Great read and nicely narrated novel.. As narration can make or break a book.. Dan Orders does a wonderful job telling this sadistic true tale...

I enjoyed listening to this story. I live in the same area where this story took place.
Only things I didn't like are minor. The story repeats things at time to where I thought I had gone back in the story, and a few names of cities get mispronounced.
Otherwise, very interesting and it does a great job of explaining how the investigation happened.
This audiobook was provided by the author, narrator, or publisher at no cost in exchange for an unbiased review courtesy of AudiobookBoom dot com.

For anyone interested in the mind of a serial killer.

This book is scary, horrifying and fascinating. An in depth look into the mind and motive of a serial killer. I received this audio book for free at my request and voluntarily reviewed.

Very detailed and very in depth. Interesting and cool to see the step by step case and capture of the monster. It did feel very much like being read a text book though. But I still couldn't stop listening

Would you listen to Blood Lust again? Why?

I would. I am a seasoned True Crime book reader and I might caution that the crimes are reprehensible, and that there are no redeeming factors for murderer Dayton Leroy Rogers. There is some biographical material for Rogers near the beginning of his childhood circumstances, yet they don't mitigate his acts as an adult.

What was one of the most memorable moments of Blood Lust?

Each of the descriptions of the attacks and murders certainly, but what stands out in my mind in hindsight, is his demeanor at the trials.

What does Dan Orders bring to the story that you wouldn’t experience if you just read the book?

I appreciated his spoken pace, it fit the material well, mostly he did a good job with various character voices. Pleasant voice and pronunciations seemed correct.

I have listened to a handful of works written by Mr. King. His area of expertise in with the True Crime genre. I have enjoyed all of them including this one!

Thanks for the opportunity to listen and offer my opinions on this work!

A review copy was gifted to me at no charge. In return, I am happy to provide an honest review. Also at no charge.

Very good, but for the narrator

I bought this as part of my research for my latest novel. It did not disappoint, well. . .but for the narrator. Monotone is being kind. Otherwise, if you can overlook that shortcoming, this is a gem.

These People Walk Among Us

Where does Blood Lust rank among all the audiobooks you’ve listened to so far?

Once again Gary King has written a intriguing story of a serial killer who by day was a normal business man and by night, a sadistic evil person. This book is in my top ten best reads.

The details he provided

What does Dan Orders bring to the story that you wouldn’t experience if you just read the book?

I enjoyed Dan Orders narration of this book.

That in my daily life, any person standing right beside you, that you might come across every single day, could be a sadistic evil person.

Sucks you right in to the world of Dayton Leroy Rogers, a world you never want to be a part of.

I found a lot of the detail really awful but had to finish the book.

I read many true crime stories and have to say whilst this is a gripping version of events, the graphic retelling of events is very detailed. it does make the capture and sentencing of the killer much more rewarding to the reader though.