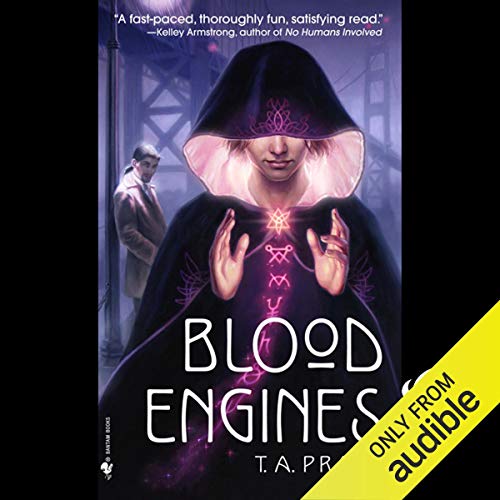 By: T. A. Pratt
Narrated by: Jessica Almasy,T. A. Pratt (Introduction)

Sorcerer Marla Mason, small-time guardian of the city of Felport, has a big problem. A rival is preparing a powerful spell that could end Marla's life - and, even worse, wreck her city. Marla's only chance of survival is to boost her powers with the Cornerstone, a magical artifact hidden somewhere in San Francisco. But when she arrives there, Marla finds that the quest isn't going to be quite as cut-and-dried as she expected...and that some of the people she needs to talk to are dead.

It seems that San Francisco's top sorcerers are having troubles of their own - a mysterious assailant has the city's magical community in a panic, and the local talent is being (gruesomely) picked off one by one.With her partner-in-crime, Rondeau, Marla is soon racing against time through San Francisco's alien streets, dodging poisonous frogs, murderous hummingbirds, cannibals, and a nasty vibe from the local witchery, who suspect that Marla herself may be behind the recent murders. And if Marla doesn't figure out who is killing the city's finest in time, she'll be in danger of becoming a magical statistic herself.

The Title Explains It All

I usually do not write reviews, but I just thought I'd give it a shot this time. The book is a great read/listen. I listened at work and found it entertaining, made the day flow by quicker. Some audio books can take a while for me to understand where the story is going, this one I picked up what was happening right away. The reason for writing this review is that enjoyed the book and wanted to see which is the next in the series. It took a little investigating because they are not numbered, so I went to T.A. Pratt's site. The order goes as follows.

I hope that helps some people who enjoyed the first book and would like to follow the series, and not make the mistake of downloading the books not in series sequence.

A very pleasant discovery, this novel has a fairly basic plot -- mostly just the main character and her sidekick chasing all over San Francisco looking for a magical object and a mad sorcerer. However, the magic -- attacks by frogs and hummingbirds, oracles in sewers, a goddess of possibilities -- are original and beautifully imagined. The heroine is very ruthless, not your typical goody-two-shoes that people find "sympathetic," and perhaps the author hits that note a few times too many, but I found it refreshing. I'll be checking out the sequel.

This is a great book! The universe this author has created is varied, interesting and dangerous, and so are the characters. While some of the topics referred to are perhaps not appropriate for children, my teenager (who usually sneers at my audio books or asks if I can turn them off) was so hooked by this book he'd ask me to pause it when he left the room, and bugged me about looking for possible sequels.

This is excellent story packed with wit and character. Ms. Almasy's narration is spirited and fits the story and characters well.
Highly recommended.

Not bad. Good enough to listen to series! Narration ok. Good buy on sale! Ended up buying them all.

Marla Mason is a spunky wizard with a city to protect, and she doesn't apologize for her priorities. It's such a fun world that I got sucked in immediately. The narrator is awesome, so great in fact, that for me, she IS Marla Mason. Come on T.A., give us what we want -- hurry up and publish book 5! Pretty please?

I am definitely glad I had listened to Bone Shop first, so that I had some historical background of Marla Mason and Rondeau. Marla comes across as cold and calculating and a bit ruthless at times. Rondeau helps to counterbalance that and to also allow some of her softness to show or she might be a bit to cruel to be considered as a heroine. Also, one wonders if she might be a bit gentler is she still possessed her memories of Daniel, which she has erased from her memory in Bone Shop by a spell she asked for. At least we know now that she realizes that she has to be careful how she uses her cape, lest it take her over and she becomes a rampaging serial killer. Despite all of this, one comes to appreciate and even like Marla. You get the feeling that she really does appreciate her friends and she is trying to do what is right. I hope we get to see 'B" in future novels as his "seeing" can provide a different slant on how the direction of the story can go. I also have been actually enjoying Jessica Almasy's reading of this series. I wasn't sure I would at the beginning of Bone Shop, but she actually does a credible job. I didn't find her annoying at all once I got into the story.

I tried. I really wanted to like this book, I gave it several goes, but I just couldn't finish it. Problem is, I don't like Marla. Yeah, she is advertised as bitchy and bad-ass, but to me, it just seemed … forced. Over the top. Plus, the overly obvious McGuffin irked me, because (as far as I've listened) there is no explanation as to why it will help her defeat her enemy, even though they talk about the thing repeatedly. So she needs the Cornerstone and that's why she's in SanFran – that's her problem, not mine and as long as no one tells me what the Cornerstone is (other than "a powerful magical artifact") and how she expects to use it against whom, I'm not making it my problem and thus, I'm not invested. Same goes for her old, dead friend; if I don't get at least some of their back story (emphasis on *their*, not just his, not just hers, but theirs. I wanna know why he is important to her), then he doesn't feel like a character, he feels like a plot device. I need more than names and superficial facts to get into a story.

AWFUL Choice for a Narrator!

I purchased this book during the $4.95 sale because I had looked at it in print, and it seemed like something I would like. Well, I'm certainly glad I didn't waste a credit or full price on it because in spite of a good story, the narrator spoils it. I Googled Jessica Almasy just to be sure that she wasn't really a 12 year old before I criticized her for sounding like one. Although the information on her is sparse, she is clearly an adult who is simply cursed with forever sounding like a pre-adolescent.

The main character is a strong, adult woman. I cannot begin to fathom how Almasy, with her little-girl voice, was selected to read these novels. (Unfortunately, she reads the entire series; I will not be listening to any more!) She reads competently enough. Her pacing and phrasing are decent, and she pronounces words correctly, but she cannot handle these characters. If her ability to voice Marla is doubtful, her ability to voice male characters is farcical. All male voices sound alike: vaguely constipated versions of Marla.

As for the story and the writing, I've enjoyed them as much as possible with the handicap of Almasy's reading. I think I will enjoy reading the other novels in the series to myself much more than I have enjoyed listening to this one. If I could divide the star ratings up, I'd give the narration 1 star just because it is SO inappropriate, and the novel itself 4 stars.

I am new to Marla Mason but I love where it's going so far. I could not get enough of book one and just tore through it in just a day or two. It is frustratingly difficult to find a female lead done right but Pratt nails it with Marla. She has depth and complexities, she is given the room to have an emotional response (and she sometimes ignores that room, which is also fantastic) and she gets things done.

Jessica Almasy does a great job with the narration, but I did rate the "performance" section lower because somebody had the terrible idea to throw the rare random sound effect into the book. I dislike sound effects in my audio books but at least the ones that have them are usually consistent and I can eventually learn to ignore them. But I was about half way through the book before suddenly, and loudly, a sound effect and background music was used for a few minutes then just as suddenly disappeared. And again, a couple hours later, another completely random, inappropriate sound effect. I do not understand the direction choice to add those in and throughly disapprove. They completely detracted from the storytelling and pulled me out of an otherwise enjoyable suspense of a tense moment in the story. If not for those I would also be rating the performance as a five because Jessica did do a fantastic job.

Marla Mason is the head sorceress of Felport and is on a mission to find the cornerstone to cast a spell and therefore defeat her main rival Susan. However life is never simple and she soon finds herself up against other sorcerers, frogs and even hummingbirds. I found this book a little slow to begin with and I wasn't sure if I liked Marla or not as she came across as quite horrible in places. However I persevered and I did eventually warm to her character. Her two sidekicks Rondo and B for me made the book as I found them quite funny. I Was wanting to give this book 3.5 stars not quite a 4.