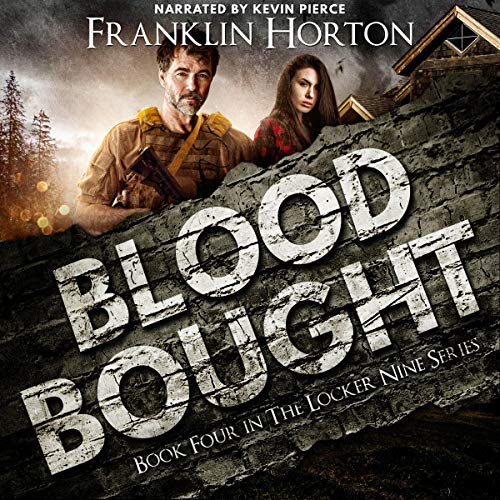 In this fourth installment of The Locker Nine Series:

Robert Hardwick is finally within reach of his family in Damascus, Virginia, but there’s no time to rejoice. His presence at a friend's compound in North Georgia put him on the radar of a corrupt congressman whose only bug-out plan is to take the property of someone better prepared than himself.

When the congressman’s effort to take the Georgia compound fails he has little time to find an alternative. He decides to track down the writer from Virginia, a man whose own home should be well-stocked to survive the apocalypse he describes in his books.

In a last ditch effort to save his followers, the congressman levels his crosshairs on the Hardwick Farm, determined to make it his own. The Hardwicks are prepared to fight him off with everything they have. It will not be easy, though. Every decision has a cost and the only currency is blood.

What listeners say about Blood Bought

I am a huge Franklin Horton fan, love this series. I can only hope that I am able to raise my own daughter to be as confident and as strong as Grace. However, it felt like this particular book was anti-climatic. I was listening for the storyline to thicken when it suddenly ended. It also feels like this was a quick, clean, and easy way to either end the series or put in on a shelf for a while.
To be clear, I am not saying the book was bad because it was not. And I have NEVER heard anything narrated by Kevin Pierce that was not spectacular. I just feel like it did not really move the story along in any real way.

Franklin is simply and amazing writer and Kevin is the best at narrating. highly recommend them both!

I am glad I came across this series definitely look forward to then next book.

It's not too often that a woman is the main character and main bad ass of the story. The story follows a college student, Grace, and her roommate as they try to make their way home after a terrorist strike cripples the national infrastructure.

Grace has one big advantage over everyone else caught up in the chaos - a protective father who loaded up a storage locker for just such a situation.

Overall the story was quite good and very enjoyable.

I guess that's all folks for this series, pity, I need to listen to more books of this quality!

Always nice when most of the good guys survive. Thank you for showing nasty selfish side of the ones we root for and the hints of goodness in the ones we really dislike.

This book picks up where the last one ended and continues in much of the same way. It was pretty good and concludes the storyline in a decent way, but I'd say too much time was taken up with describing various scenes and on the low-life daughter, which for me, added nothing to the story.

One of the things I liked about this series was the author didn't always choose the obvious path and the realism was fairly good. I still think the timeline progressed too fast, but not so much that it broke the suspension of disbelief.

By far one of the best post apocalyptic writers ever!!! and Kevin Pierce IS the voice of the Apocalypse. Horton grabs you in the first paragraph and holds you tight till the last, then you remain silent for the reality to hit that it's over and what just happened. Riveting, hold your breath cuz it's one hell of a ride!!!

This one is pretty dark

The Locker 9 Series is darker than the Mad Mick series but wow this one has some soal black spots.

That said it's a pretty good listen, well worth a credit.

A fantastic conclusion to an attention grabbing series, it kept me on the edge of my seat, and glued to my tablet! I received this book in exchange for my honest review.

perfect start perfect end. Nice to have an ending with a disappointment which is rare.