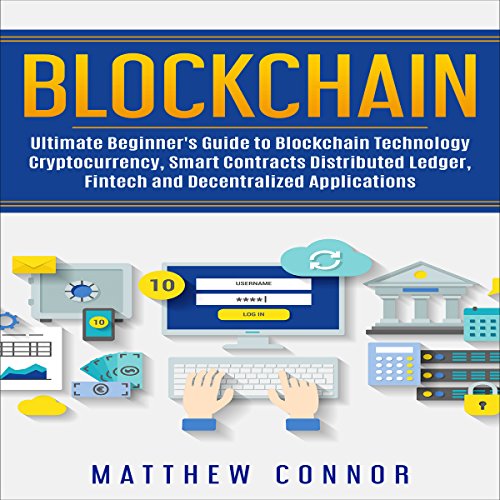 By: Matthew Connor
Narrated by: IJRA
Free with 30-day trial

Blockchain technology Is taking the world by storm!

While you may not have heard much about blockchain technology yet, you can rest assured that certain key industries already have blockchain fever, and it's spreading.

Blockchain is directly responsible for the flurry of investment that surrounded bitcoin which saw a maximum price of over $20,000 at the end of 2017.

2018 is going to be the year that blockchain comes out from the shadows in its own right. If you want to be on the cutting edge of the next big thing then this is the book you have been waiting for.

So what is blockchain?

A blockchain is a decentralized database that works as a distributed ledger. Its unique construction makes it extremely secure while allowing for a virtually unlimited number of users to interact with it at once. While this might not sound like all that much, the possibilities that this technology creates, especially in the financial sector, are virtually limitless. The secret here is that blockchains allow for strangers to conduct transactions with complete trust in the other party without the need for any type of middle man.

Blockchain is being called the most important new technology since the creation of the internet.

As with any new technology, there will be plenty of new businesses taking advantage of it to rise to prominence, and with the information that you will hear, yours could easily be one of them.

Inside you will learn:

What listeners say about Blockchain

I truly enjoyed the information shared in this book. The author is very knowledgeable and presents such key points and ideas when it comes to the future of Blockchain.

Really interesting listen- this audiobook starts from the basics and builds up to a full explanation of how bitcoin and blockchains work. Detailed while being accessible, I learned a lot about this even though I thought I knew what I was talking about before!

Having listen pretty much all of the blockchain

Having listen pretty much all of the blockchain/ bitcoin literature available on Amazon and Airport bookstores. Antony's audiobook is superior in both depth and grasp. Must listen

needed to become familiar with the essentials so

needed to become familiar with the essentials so I can all the more likely comprehend what my sister accomplishes professionally. This ends up being the ideal book recording! The book recording has outfitted me with much better bits of knowledge on the rudiments of Bitcoins and Blockchains.

A very good audio book to have and very pleasing

A very good audiobook to have and very pleasing to listen while you learn. True that technology is always changing from time to time. This is worth my time! I will sure keep this and will continue listening to the audiobook!

Many books on the subject are light on detail.

Many books on the subject are light on detail. This leaves them useless for implementing the concepts presented. This book is different and very entertaining.

I am learning through this audio book.

I am learning through this audio book. Want to know more and hopefully, this can have another edition. I can say that this can help my business! Easy to understand.

Impressed of the many different ways block chain

Impressed by the many different ways blockchain technology can offer to anybody's business. Worth a shot and I am looking forward to learning more. Shared this to my colleagues.

This is a good starting point to understand

This is a good starting point to understand Blockchain. By no means, this is a practitioners handbook. Thanks By: Matthew Connor

Love the key ideas to focus upon at the end of

Love the key ideas to focus upon at the end of each chapter, these are gems as in the blockchain asking the right questions about the blockchain is what is needed the most by both business manages and technologists.

This is a really good book for understanding blockchain. The author leans towards or against blockchain.A guide to blockchain technology and possible applications, unique you can easily find online.Interesting introduction to Blockchain.

I find this book easy to listen and comprehend.
It also explains the Internet of Things, smart contracts, the ledger of things as well as the application of these technology. It's a good

What a brief but concise summative of how blockchain technology really works. The programming languages used and the cryptography were brilliantly explained that even a struggling newbie would be able to grasp.