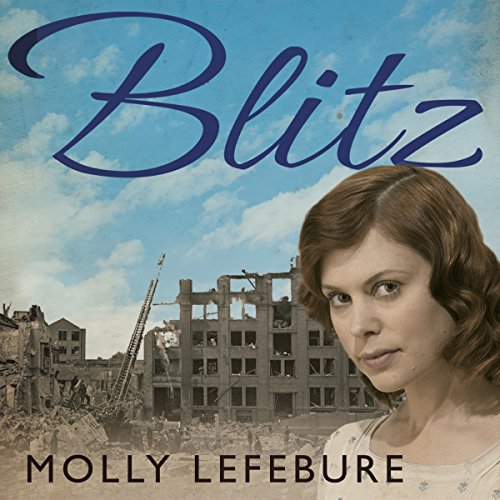 War would change them forever. When World War II broke out, no one could predict the impact it would have on their lives.

As the conflict begins to take its toll, the lives of four families become entwined. The Duchamps, the Spurgeons, the Sowersbys, and the Tooleys are all faced with personal struggles while the world around them is torn apart. Families become fragmented, love is found, and the young are forced to grow up too quickly - but all are determined to remain defiant and united against the upheaval. An emotive and heartwarming novel, Blitz! creates a vivid portrait of a courageous Britain under fire - strong, brave, and in the end triumphantly alive.

What listeners say about Blitz

Takes a bit to get into but then engaging.

I liked how the characters were all connected - eventually but it took a long time. It was hard to 'know' the characters until at least half way. Funny, then I thought the story was over before we got to the end of all that was to happen.

Beautifully written. Beautifully read. Deeply experienced. I felt I could taste the moment: the courage, the endurance, the comradeship. The worst of times, but perhaps too the best of times.

I come from Jersey in the Channel Islands so when I saw this book I bought it. Loved it but the sound didn't work for ages. I was leaving Audible then and just using up my credits. Like a fool I didn't test the sound cause it didn't work! I couldn't get help not being a member, so when I joined again it was working. I an glad because it was good, I thought it was more about what went on at that time, but it was a story. P.S. If you're leaving and using your credits, don't forget to check they are working before you do.

So much potential for a great saga, unending amount of interesting storylines? Unfortunately this ‘potentially’ fabulous interesting book was flat and while somewhat factual extremely dreary.

I loved this book. Again I want more. I lived every single page. I now feel as though I lost a great friend x

I enjoyed listening to this read by Annie Aldington but there was just one thing that spoilt it . Chapter 7 was fine, chapter 8 was so short it lasted just 16 seconds the rest of the book was ok

I thoroughly enjoyed this book, (apart from ending) it just makes you think how lucky we are living today. Also how much we owe to the thousands that risked and lost their lives and all the injured and maimed people, who totally devoted their lives so we can enjoy a freedom today. I felt I knew the characters personally.
I was very disappointed with the ending, I felt it just ended suddenly!!
I enjoyed the narration, I would just say to Annie you read very fast particularly at the beginning and it made me feel rushed and I had to rewind a few times, however that being said I thought your voices were excellent and apart from your speed I felt it was read well and you obviously put a lot if effort in.
I would recommend this book, however I warn you that the ending to me just seem to stop suddenly.

Very disappointed with this story. It is a slow and very complicated story with a lot of quotes that I do not understand at all. It also ended abruptly and I was left with lots of unanswered questions :(