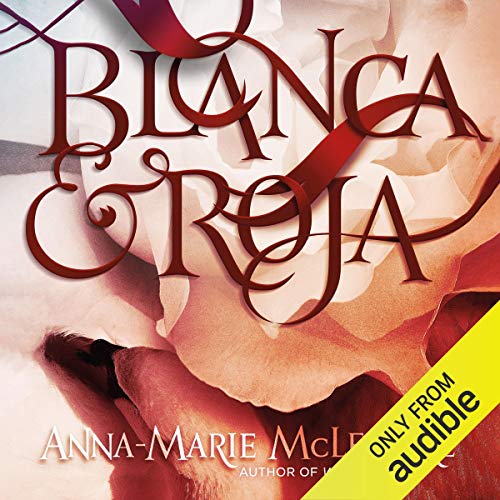 The del Cisne girls have never just been sisters; they’re also rivals, Blanca as obedient and graceful as Roja is vicious and manipulative. They know that, because of a generations-old spell, their family is bound to a bevy of swans deep in the woods. They know that, one day, the swans will pull them into a dangerous game that will leave one of them a girl, and trap the other in the body of a swan.

But when two local boys become drawn into the game, the swans’ spell intertwines with the strange and unpredictable magic lacing the woods, and all four of their fates depend on facing truths that could either save or destroy them. Blanca & Roja is the captivating story of sisters, friendship, love, hatred, and the price we pay to protect our hearts.

What listeners say about Blanca & Roja

Great story, just stick with it

This book was hard for me to get into at first. The side characters (the love interests) are better fleshed out than the characters after whom the book is named. But stick with it, because the wrap up is great.

This story has wonderful arcs of coming to terms with the body the characters have, rather than the bodies they want or the world tells them they should want. Brown instead of Caucasian. Newly disabled, and struggling with finding that being able bodied is at most a temporary state. Trans instead of cis.

The exploration of being trans and of having a new disability was nuanced, and wonderful.

This is magical realism in the same vein as Maggie Steifvater that reads like poetry -- a beautiful queer fairytale.

There are plenty of books where there is a magical world and a mundane world and characters go back and forth between the two - but they are always distinct. Separate. Not here.

In this world, the magical and the mundane exist in the same thought, the same breath, occupying the same moment and place. And the most extraordinary thing about that is that it doesn't feel extraordinary at all.

In this world there are cars and real estate developers and schools where girls get bullied for having skin that's too dark and a family that's a little strange. There are also broken boys who need a place to hide disappearing into the woods for months, existing in the minds of animals and trees and streams. And there is a family cursed to always have two sisters, and a flock of magical swans that always takes one away.

Page is a boy who goes by he or she pronouns, depending on the day. He hates being told to be a little lady. He has a beautiful POV where he explores what it means to identify that way. He loves one of the del Cisne sisters. And his chosen family - his friend Yearling and their grandmothers, Blanca and Roja - all accept that he is a boy without question, which is refreshing. His identity isn't in question, nor is it the main focus of the novel. It just is.

I LOVE the way McLemore included Roja's period, and how incredibly painful it was. The poetic descriptions were raw and spoke to me in a way that made me go 'yes. that's what it's like.' Few YA books touch on menstruation, and it was so nice to find one that did.

A wish was made, and the wish turned into a curse. In every del Cisne family 1 girl will turn into a swan. It does not matter if you get one daughter and then say no more, the swans will always have their way. There will always be two girls to choose for. And that is one terrible curse.

Blanca was the sweet one. Roja was the the dark one. And also literally. Blanca was almost blonde and was the princess. Roja had dark hair and was the witch. Blanca would do anything for her sister and I admired her for that. While Roja was jealous, resentful and at a certain point in the book I started to dislike her.

Fairytales are woven in and Roja thinks of the story of Snow White and Rose Red a lot. I guess we get some of those swan legends too. And I did like that. Which brings me to the problem i had with the book. I thought this would be fantasy, but then they talked about jeans and cars and it was magical realism. But then thing is, magical realism is always there and you can not quite know what you are seeing. While this was really straight forward, one will turn into a swan, the whole town knows it. And later there was even more magic. See, that was not my problem either, what I wanted was more world building. I know nothing except that there is a town, that we visit like once for a sec. There is their house and there is a farm. I do not know this world. I love world building, but this was driving me crazy. If it had been fantasy I could have lived with it, but now I was all, why does not anyone come to investigate them turning into swans! I mean since everyone knew it! It should have been fantasy. Now it was just lacking. And when I get stuck on something I can not let it go.

There are actually 4 POVS in this book. There are also two boys who have gone missing, but they are not missing. They turn into trees, bugs, bears, you name it and later they become human again to interact with the girls. Which yes obviously means everyone will fall in love. Barclay is the rich boy running from his family, and Page is running from her family because they can not deal with the fact that Page is a boy, and not a girl. Though she accepts being called she, but never girl. I liked Page, he was fleshed out. While Barclay was never really anything more than a blue eyed boy that Roja liked.

I did like the book (even if the menstruation parts felt too long and like fillers, oh and the end, there were like 10 endings. Just end already). I did wish it had been fantasy, because it did not feel like magical realism when I could not understand where it was . It could just as well have been fantasy then in a world with white and latin populations. I liked the magic over it and she is a great writer. So the positive balances out the negative.

Yes there are 4 and that works really well since they shift povs a lot. That way you really know who is talking since they are so different from each other. It was well balanced.

something different I wouldn't have chosen but enjoyed. loved the author vivid descriptions of everything