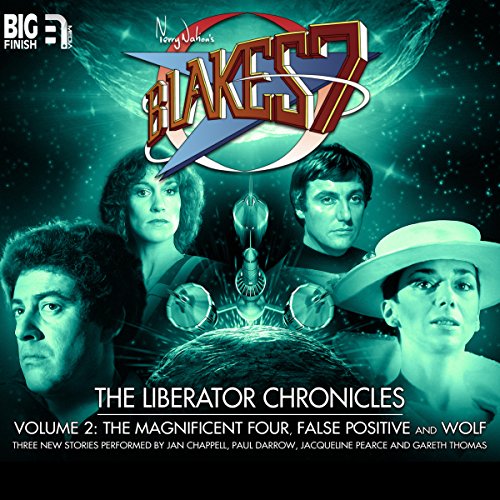 Three enhanced audiobooks performed by the stars of the classic BBC television series. These stories are set during Series 2.

'The Magnificent Four' by Simon Guerrier. Starring Jan Chapell as Cally and Paul Darrow as Avon.

A mission to steal data from the planet Mogul goes badly wrong when Cally and Avon are outflanked and outgunned. And then they are teleported to safety - to an alien spaceship stolen from The System, which is crewed by Gilden Trent and his small team of rebels. For Avon it’s the opportunity to start over again without Blake. But can Trent be trusted?

Dr Lian has a mysterious new patient – a man who was found shot in the leg near Engel City, a man who is delirious and talking about the most extraordinary acts of rebellion. She prescribes drugs and the use of the alleviator - a device that will dig deep into his memories - to unlock the truth about Carlin Guzan. But the truth that she exposes is far more shocking than she bargained for....

“I heard his death cry. I felt it. And there was a word. ‘Wolf’. You, Servalan. You were the “Wolf”. You killed him. I want to know why.” Some time ago, Blake and his crew were helped by a revered Auron scientist named Gustav Nyrron. He stayed aboard the Liberator for a time, and then disappeared .Cally wants to know what happened to Nyrron, and only Servalan knows the answers.

What listeners say about Blake's 7 - The Liberator Chronicles Volume 2

Several great stories to add to the B7 canon!

I will listen to them all if they are this good. The quality is up there and could easily have been TV episodes.