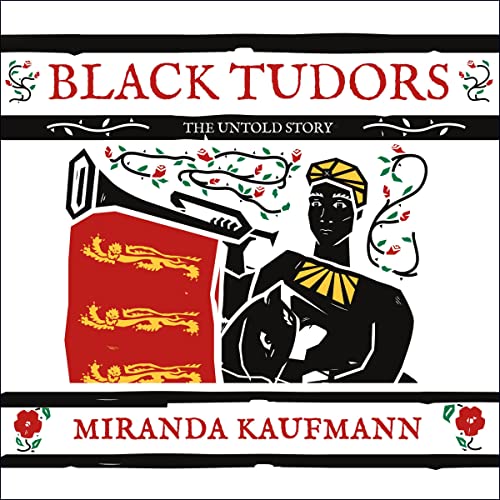 A Black porter publicly whips a White English gentleman in a Gloucestershire manor house. A heavily pregnant African woman is abandoned on an Indonesian island by Sir Francis Drake. A Mauritanian diver is dispatched to salvage lost treasures from the Mary Rose.... Miranda Kaufmann reveals the absorbing stories of some of the Africans who lived free in Tudor England.

From long-forgotten records, remarkable characters emerge. They were baptized, married, and buried by the Church of England. They were paid wages like any other Tudors. Their stories, brought viscerally to life by Kaufmann, provide unprecedented insights into how Africans came to be in Tudor England, what they did there, and how they were treated. A groundbreaking, seminal work, Black Tudors challenges the accepted narrative that racial slavery was all but inevitable and forces us to reexamine the 17th century to determine what caused perceptions to change so radically.

What listeners say about Black Tudors

"Well-researched" is the faint praise of reviews. This topic is most interesting, but the narrative slews back and forth over centuries and locations and is almost impossible to follow. The text is costive with far too many details which were better edited out and replaced with a summary.

It was a surprise to find this book. As an african american Tudor nerd, I have read dozens of books on Tudor history and for me this was a gem! I loved hearing about people of color being apart of such a historic time in british history in the capacity of a normal human being, and not that of a slave. It gives a total different perspective and fives me a new respect for the Tudor period.

struggled with the first 2 chapters but quickly got sucked into the narrative after that. this book is dense with direct quotes and historical excerpts and dances on the edge between pure historical dissertation and non-fiction sorry telling.
A good, heady listen with even more resources in the Final Chapter for you to dive in further. I would highly recommend this book to my fellow history nerds.

Another intriguing title and an opportunity to learn things about society, laws, and history that I knew virtually nothing about. Miranda Kaufmann has explored a variety of records from ships, taxes, churches, court cases, poetry, plays for the theater (think Shakespeare), and more. The research and stories will at least have some people rereading Shakespeare's works. People from other countries and continents were taken to London or British ports for many reasons--one of which was education prior to conversion and baptism to the church. Of course there is a good portion of the ships travels and pirates and trading in goods. Take a new look at how skin color was viewed during the Tudor period. I was surprised. It is a good book. The narrator is satisfactory but may be too quiet or even in tone in places. Really good topic!

A Treasure Trove of History

Have you ever dreamt of finding a treasure chest? Well this is the treasure of history. Kaufman never stops giving the reader new and interesting stories that connect different peoples of history together despite their cultural and physical differences. As a history professor I was amazed by her detail over the interactions between commerce and social events and her details about the plague and possible cures. There is so much useful information in this book that I have to reread sections...just amazing!

Absolutely fascinating read and highly recommended. I do wish the publisher hadn’t gone with a white narrator though.

This book helps people discover that racism was not always the same as it was during slavery times in the British Empire.
You may be related to the black tutors in this book! Everybody is related if we go back 2000 years if we only had the family trees in the DNA to prove it that would be less racial conflict.

For my Black brothers and sisters they need to know that Black agency and Black progress is more possible now. If progress for some was happening then.. Wow unbelievable individual progress can happen in their lives now. Racism is diminishing and the future is leaning to interracial power

This book brought many smiles to my face excellent work.

This book is a window into the common lives of ordinary africans living in Europe that have been hidden from the mainstream historical record due to a lack of interest or research on the part of many scholars. Historians need to further research the past on this topic as they would do a service to world culture. Thank you so much for the enlightenment

I want my money back please

narration boring, story long winded...it just was not my cup of tea. It lacked suspense. It dragged on and on.

The N word was used frequently. I would never willingly subject myself to hearing it. J wish I could get my time back

A really excellent book, hugely well-informed (the author has a doctorate from Oxford on the subject), and full of human interest. I listened to the whole thing in about two days.

Aside from its main subject matter, the book is also full of great little facts (e.g., the exact % of cows bequeather in wills, who are mentioned by name)

A fantastic book; so much unknown history

What a brilliant book!

Kaufmann takes 10 people of African origin who we know were in Tudor England and uses them to riff about various aspects of life, including music and politics in the court, religion and belonging, trade across the emerging world, and day-to-day life of a rural dairymaid.

Whilst it is a book about different races in 16-century England (the main point being that people were much less bothered about skin colour than they were about religion), it also opens a realistic window on life at that time.

However, the narrator had some annoying pronunciation habits (according to her, 'coif' = 'quiff' and 'Mainwaring' ≠ 'Mannering'), which was surprising from someone with an otherwise RP and clear voice. I also found her rather slow, but this was easily sorted by listening to it at x1.1 speed.

Excellent in every way.

I knew very little about this subject but I am so glad that I read this book as it opened up a whole new world for me.

Excellent scholarship and accessible writing produced an interesting and enlightening story of the lives of several black men and women who led successful lives in an England where slavery did not exist. Some had lowly and perhaps despised lives as sex workers but others ran their own businesses and learned trades. Many led respectable married lives and produced children. Some were associated with the gentry or aristocracy and some were called upon to serve royalty. All of them were unique and talented in their own way and many led adventurous lives.

The book left me with many questions such as why it was not possible for England to continue in this enlightened fashion; perhaps if it had there would not be the societal problems in today's troubled world.

I thoroughly recommend this book which was well narrated and kept my attention all the way through.

The history is not just about slavery. It is so much more. Educated Thank you

Thoroughly researched and revealing history of Black people living freely in England during Tudor times. For some reason the chapter titles do not line up with the narrative, which is a bit disconcerting. Apart from that, would recommend to any one interested in English history, not just from a Black perspective.

Fascinating history of black history in Tudor times let down by a white, lofty and aristocratic reading by the narrator.

Some very difficult words to the modern ear abound and should come with a warning at the start of the book this is unsuitable for playing in public and may be upsetting - earphones delivery is recommended.

I was looking forward to this book as I love history but I found it didn’t hold my interest.
I didn’t enjoy the narration which made me feel I was in a boring lecture.
The stories had the potential of being so interesting but the individuals got lost in all the dealings going on around them. I understand that there is scant information about some of them but I felt they became secondary to other characters and events.