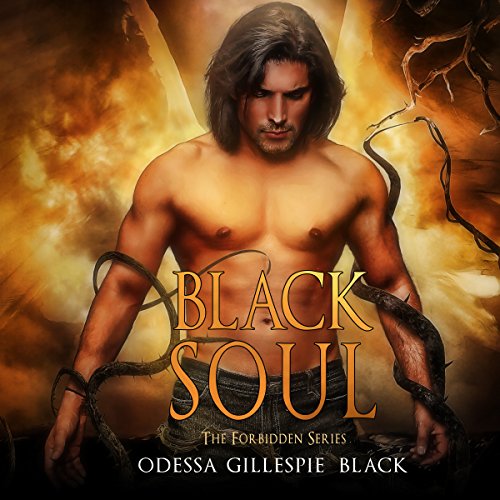 Half man, half angel, all soldier.

The souleaters will stop at nothing, even death, to uphold divine law. When duty brings Noah Kavanaugh into Nurse Caroline's path, he is unprepared for the intense desire igniting between them. Rejecting the impulse to take Caroline as his mate becomes unbearable. The limits of his own self-control are tested. So is his loyalty to the law he upholds.

A forbidden human, Caroline is determined to find a cure for the mysterious Noah's illness. With her blazing attraction to him, she'd willingly sacrifice her heart, body, even her life to end his suffering. However, can she bring herself to make the ultimate sacrifice in order to save them both?

What listeners say about Black Soul

I loved the premise of this audio book. It’s different and caught me up right away. The characters were awesome and the story was captivating. I loved the plot twists I couldn’t see coming. The narrator did a great job!

Black Soul by Odessa Gillespie Black is the 1st in the series.
This was a great take on Angel's and great world building. I enjoyed the story and found myself caught up in Noah's anguish!
Looking forward to more!

This is a real interesting world described. It has a array of emotions in this one. I look forward to more as this didn't have the finality I crave. Erik and Terri do a great job.

I was given this free review copy audiobook at my request and have voluntarily left this review.
AudiobookObsession
AudiobooksUnleashed

I received this book for free for a honest review.  I loved the characters and storyline.  it flowed very well and held together. written so well . page turner !The narrators did an excellent job of bringing the characters to life.  reccomend

Audio review, listened on Audible. Both narrators were okay. Male narrator fit the characters well. Solid performances by both.

Unique, interesting story. Did move a bit too slowly at times and the ending is unsatisfactory, but I was still entertained the whole time. This is a bit of a cliffhanger ending for me; I’m interested to read the next book. Caroline is filling in as an in-home nurse for her mother; Noah, the patient, is bed-ridden. He’s a very grumpy guy, but he has his reasons. There’s some seriously bad things going on in Noah’s world; supernatural type things, and Noah hasn’t quite been an Angel himself. Noah tries to deny the pull he feels for Caroline, but it’s tough. When Noah’s world encroaches into Caroline’s, he needs to find a way to protect her; it’s definitely a tough, dangerous job. This is a slow burn and started a bit on the light side of things, but does go down a dark path. I loved Caroline’s sassiness initially, but she started to annoy me when she found out more about Noah. The writing didn’t quite flow right at times, but I really enjoyed the whole concept of the story. Hoping the next book provides some happiness for the characters.

Great narration. Great story of Good and Evil with strong characters struggling for the greater good. This story has action, humor, tragedy and love and makes a great listen.

Such a great book.. I can't wait to read the rest of the series! Very descriptive so much that you can imagine being there. The overall balance between romance and supernatural makes this a great read for men and women!

Letting go of the past.

This book is well written a real fire 🔥 bomb. Odessa Gillespie Black has a way with words that will keep you on your toes from the first page. Black soup is filled with love, honor, duty, death, betrayal and heartbreak. I can't wait to hear or read more from her. Well worth the price.

Can't wait to read the next book

I received this audiobook to review and I'm so glad I did. The storyline is not only romantic and funny but has some twists you don't expect. The narrator's voices really bring the characters to life.
This book is a no brainier read!

Loved everything about this book!! Great characters, all are very complex and I can’t wait to learn more about them. Loved the story, plenty of twists and suspense that kept me guessing. Plenty of heat too! Fantastic narrator, who did an amazing job of bringing the story and characters to life. I received a copy of this audiobook at my request and I have voluntarily left this review.

loved that this story was told by a male and female, well done Terri and Erik you worked perfectly together so well i was absorbed completely.
soul eaters was a new experience that i thoroughly enjoyed

I enjoyed listening to the dual narration of Erik Johnson and Terri England, spot on.

This was not your average paranormal romance, it was action packed, an emotional rollercoaster - incredibly moving. I was addicted from the first pages and couldn't put it down, I finished far to quickly and was left desperate to know what would happen with Noah and Caroline, and the rest of the soul eaters. I'm desperately waiting for book 2, I'm hooked on the series, the narration was really good. I received this book in exchange for my honest review.

Well written, great story.
Narrators were easy to listen to. I liked having 2 narrators.
I found it hard to put down. Listen to whole book in one go.
Great work