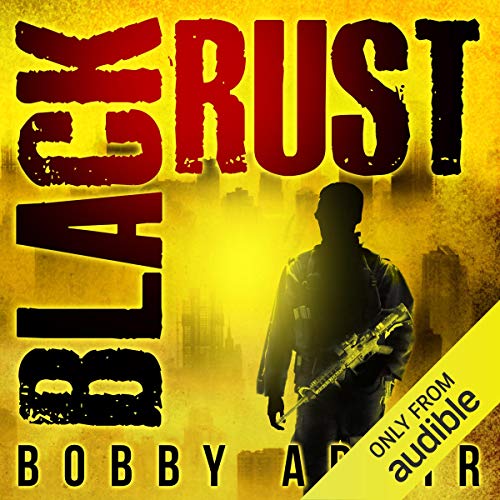 The virus came, and the world fell into an abyss.

Starvation camps, corporate farms, endless ghettos, and failed states darken a future where most of the population has been twisted by the disease.

To protect itself, a corrupt system pays Christian Black and others like him to exterminate violent degenerates who would destroy what's left of the world. Unfortunately, a mistake has been made and Christian has put too many of the wrong ones to death. Laws have been broken. Punishment comes for Christian, but he will stop at nothing to keep his freedom.

Download Black Rust and blast through the apocalypse on a white-knuckle thrill ride.

What listeners say about Black Rust

Great book. Bobby Adair creates an anti-hero I can relate to. Enjoyed this thoroughly. Read it. Waiting for more.

This was a really great listen and I wish there was more.

The story was fast paced and had lots of action.

The ending was left open for possible additional books.

There was such potential for this plot with the set-up in the first free Book. While the story in the second book was interesting as a thriller action story in its own right, it did not take advantage of the unique pandemic plot set-up in the original story. There are so many places you could have gone with the original plot. The second book all surrounds a mass murder that needed to be covered up. Ho hum. Better luck next time.

Book one was free and 2 hours. It caught my interest.

This book (book 2) was probably the second worst book I have ever listened to. Not the narrators fault. It’s the horrible writing.

First the story skips 10ish important years between the two books that are constantly referred to in this book. So much so I had to check multiple times to see if I missed a book.

Second, the story is horrible. Think: he wanted to make a Jason Bourne series and write it in 12 hours with a bottle of inexpensive wine. Nothing good can come out of that.

Finally it ends trying to surprise you with a Segway into the next book. When I say surprise I mean the last 8 minutes a main character totally changes persona?

I didn’t see that coming! Lots of twists and turns.

Do not go into this thinking “zombie” or even “infected”. It’s more of a suspense or mystery.

This is the second book in the Black Rust series. This book went in a totally different direction than I had originally envisioned. That's not a bad thing, in fact it was a pleasant surprise.

In this second installment the author has jumped forward about 20 years post initial infection. The main character, Christian Black, has adjusted to the new world is now working as a "regulator" - someone who dispatches troublesome degenerates who's brains have deteriorated from the infection.

I really enjoyed how the author has created a world that has adjusted to the infection and while drastically changed, still works as a functioning society. Many SHTF books move directly from normal to total collapse, so this was a refreshing change.

This book is an action filled, zombie filled and a shoot first think later crazy adventure.

I really enjoyed meeting the grown up Christian but really wanted to know what happened to Addy and his childhood friend who invited him to Mexico.