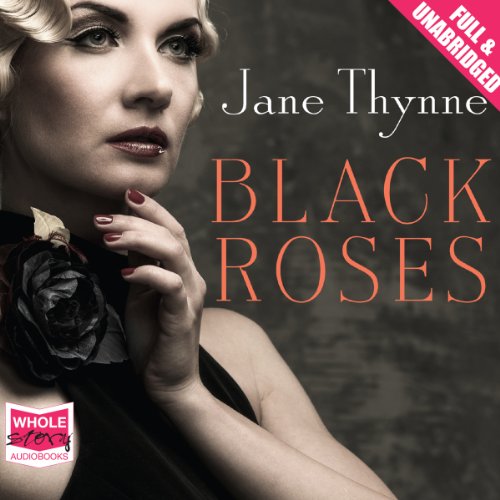 Berlin, 1933. Aspiring actress Clara Vine arrives in Berlin to find work at the famous Ufa studios. Through a chance meeting, she is unwillingly drawn into a circle of Nazi wives, led by Magda Goebbels. British Intelligence officer Leo Quinn sees Clara as the perfect recruit to spy on her new elite friends. But then Magda reveals to Clara a dramatic secret and entrusts her with an extraordinary mission.

"The crosscurrents and dangers of the build-up to war are established with expertise and not a little menace. Terrific." ( Elizabeth Buchan for Sunday Times)
"Thynne's thriller is strong on the city’s paranoia, and its exploration of the Third Reich’s bizarre attitude to women gives it an original take on Nazi Germany" ( Mail on Sunday)

What listeners say about Black Roses

Did not go anywhere.

Would you ever listen to anything by Jane Thynne again?

No not after this one.

The story was very slow to build then at the end fizzled like a wet fire cracker.

Full marks to the reader who made the entire story so easy to listen to. I would never have finished the book if not audio. Knowing it's all based on fact makes the story quite thrilling - such brave spies . Will read the series over time.
Lcdee

Really well researched and written. Can't wait for the next one.
Throughly enjoyed it. Great narrator.

Can’t wait to listen to the sequels to this book

At first I thought the book was too slow. I wanted it to move along. I didn’t realize at the time it was important for me to pay attention and not ask for speed. Very suspenseful at times bold just when you think you have got it something else entirely happens. Characters well developed it just 1933 now. I didn’t really realize hitlers rise to power started that early I highly recommend this book. Things in upper echelon of Nazi elite not what it seems

This is such an interesting book. I love the story and characters and weaving together historical and fictional events.

Not a bad listen but lacking atmosphere

I don't consider this book a waste of a credit and listened till the end. To some degree it held my attention however it was a rather passionless and insipid story. Considering the time in history this story is set and the real life political figures within the third reich that are mentioned within the text there is little trepidation, anxiety or atmosphere and indeed what the story does muster is in my opinion, largely created from the fact the listener is aware of the monstrous acts perpetrated and sanctioned by of the likes of Goebbles rather than any brilliance within the writing.
I found it hard to care very much about the main character which perhaps didn't help. I am aware that the story progressed in to a series and would be tempted to listen to another to see if things livened up as the plot is an interesting idea however I wouldn't waste a credit on a book that is much the same as this one which was rather bland. On times it felt like a historical name dropping exercise.

Would you listen to Black Roses again? Why?

No. I really enjoyed the story but several careless mispronunciations and breaks at the wrong points of sentences made it frustrating. Although I want to read more Clara Vine adventures I'll be getting text copies rather than audio for this reason.

Yes the pace was fine it was just the errors mentioned earlier that were irksome. One good thing was that the narrator didn't attempt comedy German accents but just gave people different voices (not always different enough for me though).

One of the pleasures of this book was that it took several topics and themes with the potential for melodrama and presented them in an interesting but not emotionally manipulative way. Reflecting how Magda Goebbels is presented perhaps - a very odd, eventful life but a veneer of cold glamour.

I loved the passages about cinema; details of the studios, mentions of German stars and directors of the time and would have liked more of these kinds of things.
Basically cinema, spies and inter-war Europe are my favourite themes so in that way this book was a delight though the character of Clara needed a bit more oomph.

What made the experience of listening to Black Roses the most enjoyable?

Clara. A complicated yet open and brave character.

The intimate meetings with Magda Goebbels

I will be reading this book again in time

Well read good story and a history lesson all in one. I will buy the next in the series

This is a favourite of mine and I listen to it about once a year. I love the details scattered through out, most of which are true and bring the characters and 1930s Berlin to life. It’s interesting to see the Nazi elites as real people, with the grumbles of everyday life juxtaposed to the extravagance of their lifestyles and the callousness of their doctrine.

I purchased this book after I listened to book 6 in the series (which also is a good listen). The characters are believable and leave you (well me any way) wanting to know more about this time in our history. I would recommend this series.

This is an interesting and sometimes compelling book about a period of history I knew little about. However, it has a very unsatisfactory ending and this is why I did not rate it totally five stars