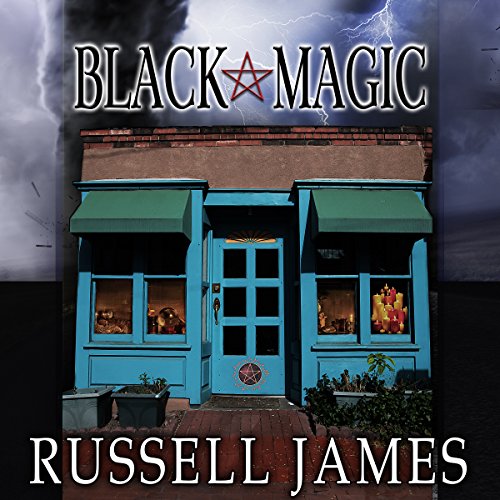 In this magic shop the magic is real. And the trick is on you. Citrus Glade is a dying town that needs new businesses, but the one that just opened is doing much more harm than good. Stranger Lyle Miller's magic shop seems to only stock what its select customers desire. When four outcast boys buy common party tricks, only Lyle knows what those tricks can really do. As subtle changes occur around town, a few residents realize that something is amiss...and getting worse. But it may already be too late. Lyle's black magic has empowered more townspeople to help him execute his Grand Adventure, a plan that will reduce the town, and half the state, to rubble.

What listeners say about Black Magic

I generally like to start off my reviews with a positive, something I really liked, and for me; as good as the story was, the narration by Stifel just shone like a beacon on a dark night. He just embodies the story and characters flawlessly, so that it doesn't seem as if he is reading it to you, but rather as though he is telling you about an experience that he had. Narrators can break a great story, and make a bad one great. Thankfully, here, the material is top drawer stuff and so we can an amazing meshing of superior talents.

Black magic does start off a little slower than I'd like, but I recognize set up, and realize that you need to get to know the people before you get to the action. Otherwise, who cares what happens to them?

This book does have a feel like it took a page from Stephen King's book Needful Things. Evil presence, shop, suffering town folks, etc. But the similarities are superficial. I have never been impressed with King's work. I really think he is overhyped and a mediocre talent. James does a lot better with this kind of material, and you will be impressed with the places he goes. There is a reason this is called "BLACK" magic, as there are some dark moments in this book.

If you like a great creepy bad guy, black souled deeds, and feeling for some poor "innocent" victims then this book is for you. Get it and enjoy it as soon as you can. You won't regret it.

Even though I did receive a promo code for this review it in no way influenced my considerations of the material, and in fact, inspired me to be more honest. In fact, getting a code generally makes me harsher as a reviewer as I am more often concerned what someone like Me will decide based on my review.

Black magic is the name of the game in this entertaining horror story from Russell James. Dark magician Lyle Miller has set up shop in the downtown portion of the dying Citrus Glade, Florida, where his magic shop draws the attention of four teenage misfits and a priest who suspects devilry is afoot. Such is the opening of Lyle's Grand Adventure, which promises to deliver plenty of bloody murder alongside an apocalyptic storm that will wipe Citrus Glade and all its inhabitants clean off the map.

Black Magic was a nice surprise to discover. At first, I had thought the story lacked focus as much of the first hour of this 8 1/2 hour listen is devoted to introducing the book's major players, of which there are many. James assembles a large cast to wreak plenty of havoc upon, ranging from the mayor of Citrus Glade to the town's sole DPW worker, a citrus farming family, a drug mule, a handful of retirees living in an old folks home, and more. Thankfully, Black Magic rewards the patient listener and James draws his diverse cast together in a few surprising ways, drawing them all into various energetic and action-packed set pieces. This book also served as my introduction to Russell James, and I was pleasantly surprised at his ruthlessness as he dispatched characters in some rather unsettling, and magically showy, ways (it's only after having listened to Black Magic that I now realize I have several other titles from this author on my Kindle, which I'm now forced to move up the reading queue a bit!). The classic trick of sawing somebody in half gets a gory, gut-twisting workout in a scene I won't soon forget, and James riffs on several other well-known magic tricks along the way in wonderfully gruesome scenarios. James doesn't pull any punches and, frankly, I wouldn't have it any other way.

On narrating duties is David Stifel, whose baritone voice gives this book's various horrors rich gravitas and plenty of weight. Having listened to a few of Stifel's other readings, I knew what to expect from this reliable narrator and wasn't disappointed.  Black Magic is a fun work in its own right, but Stifel makes it an easy listen to sink into. He's a pro, delivering a well-finished audiobook with no noticeable flaws in the production.

Russel James delivers a highly enjoyable and engaging magic-based horror thriller. Black Magic is more Wes Craven than Charmed, so if you're looking for a fun, pulpy romp with plenty of darkness and savagery, this should fit the bill rather well. And if that doesn't sell you, there's some mean alligator action as a nice bonus!

Audiobook was provided for review the narrator.

I loved this book!It was very like a bunch of other books I loved.A store comes to town and kids start to do magic tricks,then it's not just tricks.There is an ancient evil beneath the town and a few are chosen to fight it.David Stifel was a very good narrator.A great read!“I was voluntarily provided this free review copy audiobook by the author, narrator, or publisher.

Citrus Glade is a little small town with a great past but a bleak present and future. Lyle Miller arrives in town and opens a mysterious magic shop, which appears to be almost empty, but just has the necessary item on display when the right visitor arrives. Four boys purchase there different items, without knowing that they are getting much more than what they think, since they will be part of an evil plan crafted by Lyle.

I have to say that I expected more from this book. The premises were interesting enough but the lack of character development and background stories made me lose interest. It is clear that Lyle is a very old evil being, since we get a couple of glimpses about his past hear and there, but not really enough to make him a solid character. The most developed characters were the four boys, victims of Lyle, but even like that they were two dimensional. The rest of characters were likable but mere drafts. Their actions were expected.

All in all, despite these minor issues, it was an enjoyable story, a bit long winded for my liking, but an easy and entertaining listen. David Stifel, its narrator was the best part of this audiobook. More than just reading, he is a great story teller, creating a special atmosphere and unique character interpretations. Just only because of the narration, this audiobook is worth the listen.

I received a copy of this book in audio format from the narrator in exchange for an honest review.

I really enjoyed this book. The subject is different from what I thought it would be, but it held my interest from the beginning. The narrator was very good and made it easy to listen to. I found it very entertaining. I received this at no cost from audiobook boom.