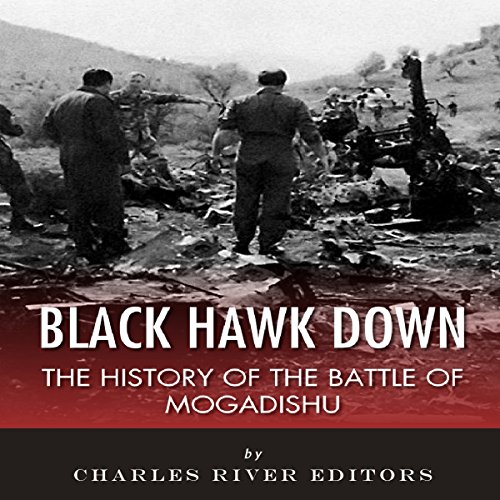 Black Hawk Down: The History of the Battle of Mogadishu

Includes an explanation of the action, what went wrong, and an analysis of who was to blame. Includes online resources, footnotes, and a bibliography for further reading. Includes a table of contents.

"The Somalis were a curious bunch. For every armed person, there were 50 unarmed just standing around, often right next to the guy firing at us." (Michael Goffena, a Black Hawk pilot)

If it was the dawn of a new world order in the 1990s, it was one of American unilateralism. Throughout the decade America's unrivaled power and the globalization of the world through technology like the Internet offered Americans a sense of security and a belief that the United States could accomplish anything. After the collapse of the Soviet Union, the United States was the world's only remaining superpower, and communism around the world began to decline. Moreover, since communism in the Soviet Union was not defeated by outside military force but collapsed from within, its draw as an alternative system to Western capitalism and democracy was seriously weakened.

Ten years after American marines were killed in the notorious barracks explosion in Beirut during Lebanon's Civil War, American special operations forces were sent to Somalia at the behest of President Bill Clinton as part of Operation Gothic Serpent. The goal set for the American forces was to capture Somali warlord Mohamed Farrah Aidid and thus prevent him from continuing to perpetrate violence. There is an ancient and oft quoted Somali saying that in many ways sums up the outside perception of Somalia, a race that appears unchangeably wedded to warfare and internal conflict: "Me and my clan against my nation. Me and my family against the clan. Me and my brother against the family. Me against my brother."

What listeners say about Black Hawk Down: The History of the Battle of Mogadishu

It's an alright read I guess

Maybe not worth $5 But a decent book with more back story on the event than the event itself.