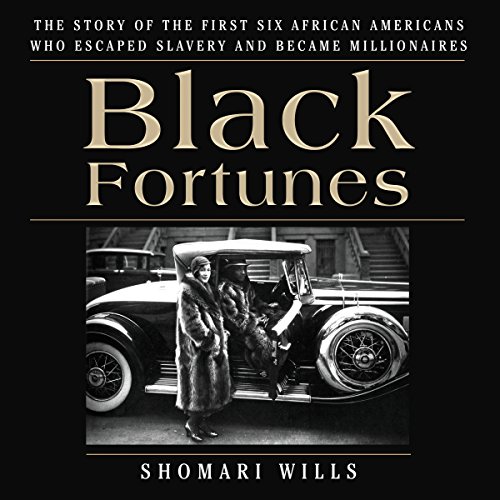 The astonishing untold history of America's first Black millionaires - former slaves who endured incredible challenges to amass and maintain their wealth for a century, from the Jacksonian period to the Roaring '20s - self-made entrepreneurs whose unknown success mirrored that of American business heroes such as Henry Ford, John D. Rockefeller, and Thomas Edison.

While Oprah Winfrey, Jay-Z, Beyoncé, Michael Jordan, and Will Smith are among the estimated 35,000 Black millionaires in the nation today, these famous celebrities were not the first Blacks to reach the storied 1 percent. Between the years of 1830 and 1927, as the last generation of Blacks born into slavery were reaching maturity, a small group of smart, tenacious, and daring men and women broke new ground to attain the highest levels of financial success.

Black Fortunes is an intriguing look at these remarkable individuals, including Napoleon Bonaparte Drew - author Shomari Wills' great-great-great-grandfather - the first Black man in Powhatan County (contemporary Richmond) to own property in post-Civil War Virginia. His achievements were matched by five other unknown Black entrepreneurs including:

A fresh, little-known chapter in the nation's story - a blend of Hidden Figures, Titan, and The Tycoons - Black Fortunes illuminates the birth of the Black business titan and the emergence of the Black marketplace in America as never before.

What listeners say about Black Fortunes

I loved the stories. It had confirmed the story of Robert Church, from a previous book I read. the narrator is fitting, not over barring or dull while narrating the story. Not being bias, but as a black male I feel black history is American history.

Liked the history and multiple number of success and full entrepreneurial journeys of these Black Americans. You will be forever changed with this read.

Discouraging yet Encouraging! Oxymoron - I know...

Discouraging yet encouraging! I know it’s an oxymoron, yet that is how I felt as I listened to this book. As an entrepreneur who happens to be a black man I found it insightful, yet painful as I experienced a rollercoaster of emotions throughout.

It was discouraging to see how these entrepreneurs and titans were terrorized and systematically robbed of their fortunes because of skin color.

Yet, it was encouraging to see how they overcame unspeakable odds to become successful.

It forced me to recognize how comparatively easy it is for industrious African Americans to find and seize opportunities to grow wealth today and has strengthened my resolve to persist, come what may. It also impressed upon me the importance of putting mechanisms in place to protect wealth and legacy for the next generation.

Kudos to the author for painstakingly researching, restoring and making known this important piece of African American history!

The account of these brave men and women should be added to all American History text books and be required reading for students in the public school system.

Not your typical historically focused book. Written in more of a story-type format, I was engaged from the beginning and the energetic flow of the book kept me listening and thinking about the book even when I wasn’t listening. Highly recommend this for readers/listeners that enjoy historical and inspirational books.

A lot of these stories go untold. It is refreshing and educational to learn of the stories that are ignored by conventional academia. Well researched!

I learned a lot!

it is hear to see real stories about the African-American experience. I am going to do more research.

Great storytelling, phenomal flow/writing style and learned something! Absolutely recommend this book and it should be required reading for any African American lit class.

This was an AMAZING book. You have sparked my curiosity even further about our journey here in the United States and what we are capable of doing. You also gave me a reminder by telling this story that we have work to do and the job is not yet done. Thank you for writing this book.

A MUST READ FOR ALL BLACK CHILDREN

This book belongs in schools. Since we know that's not happening, please make sure your children read this phenomenal retelling of millionaires who transcended EVERYTHING. It's also important to remind this generation about the negative connotation associated with "pulling yourself up by your bootstraps". Blacks have done this throughout history, only to have the fruits of their labor stolen or destroyed. This piece is so important.

An eye opener to how some of the most ambitious black entrepreneurs overcame the unrivalled adversity of post-slavery America.

Loved it! By turns, enlightening, inspirational and distressing but still sounding a note of optimism.

This book is a very informal and an amazing listen. I think its so important for children to leran thisnin schools. I only heard of 3 of the millionaires and was so happy to learn of the other.

This book is well written, well informed and well narrated. I fully enjoyed listening to it and the voice of the narrator. I knew the names but not the stories of those men and women leading the black wealth journey. From this book I learnt much about American history, the economics, the race issue and the truth about the Tulsa Riots!

I highly recommend to all and definitely feel that all teenagers should hear this important books words. Now that I have finished I will have my son (teenager) hear it.

Should be turned into a TV show!

I really enjoyed Black Fortunes, so much so that I’m going to also get a physical copy for my library.

It an amazing narrative really giving a fresh take on that period of American history. It demonstrates the often brilliance of the black people of the time, while also drilling home the fact that despite their riches, when it came to it, they were still often seen as second class citizens.

The way that it’s been written really made me think about the way society is set up in 2019 and it was saddened me that some of the issues touched on in regards to race relations, self hate and the down playing of black women are still very much part of the world we live in.

I’d definitely recommend the book to anyone who has an interest in black/American history, the slave era and even enterprise and entrepreneurship.