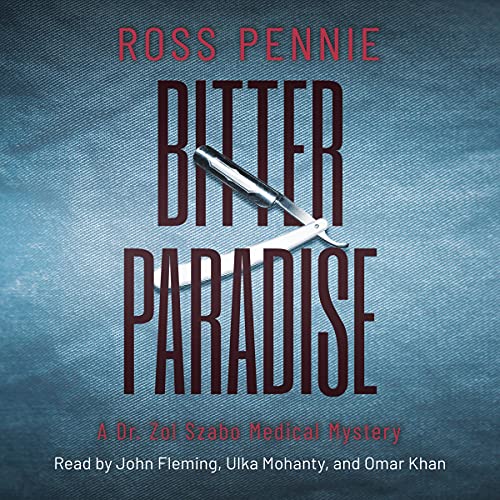 Fans of Bones and Coroner will love Dr. Zol Szabo, a doctor who is out to solve medical mysteries before it’s too late

After weeks of torture at the hands of Syria’s secret police, the bombing of his villa in the ancient city of Aleppo, and the murder of his daughter, trauma surgeon Dr. Hosam Khousa flees his fractured homeland with his wife and son. They make their way to Canada as refugees, where Hosam is forced to trade his prestigious scalpel for a barber’s humble clippers. Though he aches to regain his once-prominent surgical career, cutting hair in Hamilton, Ontario, seems a safe way to make a living, until a fellow Syrian is slashed to death in the barbershop. The ensuing gangland vendetta entangles Hosam and threatens his family.

At the same time, epidemic investigators Dr. Zol Szabo and Natasha Sharma are battling an outbreak of vaccine-resistant polio that has struck the city with terrifying fury. When Hosam visits a friend clinging to life in the intensive care unit, he spots something that might help the investigation but will ruin his chance of retaking his place in the operating theater. The Great White North is not the sanctuary he expected, but it’s a bitter paradise he must learn to navigate.

“A masterly mélange of medicine and murder with a topical look at the myriad problems refugees face.” (Kirkus Reviews)

“Pennie, himself an expert on infectious diseases, injects the narrative with authenticity and a sense of urgency.” (Publishers Weekly)

“The writing is masterful...not only for the prose and the impressive plotting, but also for the crackerjack finale.” (Booklist)

“The only item missing from Ross Pennie’s new novel that would make it entirely topical is a Trump-like figure. Otherwise everything currently striking the world - the spreading of an infectious disease, medical characters on the lofty order of Anthony Fauci, innocent victims - are in place, though hardly on the universal scale of today’s real life.... What gives the book its powerful sense of reality is Ross Pennie’s own credentials as a retired surgeon who devoted his talents to infectious diseases. You want the real thing? Pennie delivers.” (Toronto Star)

What listeners say about Bitter Paradise