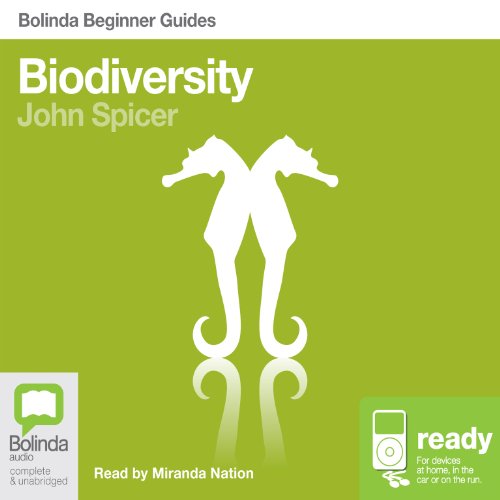 One of the issues that will never go away is that of the well-being of planet Earth and how humans can best preserve it. Arising out of this topic lately has been the buzzword Biodiversity. A sharp and clever word, sure, but it’s a challenging topic that bears more than its fair share of debate. To help listeners get a handle on biodiversity and some of the major problems plaguing our planet, biologist John Spicer has created this easy-to-follow and engaging audiobook. Performed with a friendly and gentle delivery from experienced narrator Miranda Nation, this is a great primer for those wanting to know more about the planet they call home.

Biologist John Spicer shows how closely our future is linked with that of biodiversity while navigating listeners through some key problems facing our planet, including mass extinctions, population explosions, habitat destruction, and pollution. Along the way, he provides valuable insight into the impact humans have had upon the earth and its inhabitants, whether efforts such as ecotourism really help, and how scientists and economists calculate the "value" of biodiversity. Passionately argued, this book is a must for anyone who has an appreciation for nature and wants to understand the real issues at stake in preserving it.

This is religious propaganda.

Whilst this book has relevant information in regards to it's content I was left listening to this book with my guard up. I could not get comfortable and put my guard down and I had a complete and utter lack of trust and respect for the author. It ruined my whole experience and I'm sure that he only put the relevant stuff in to white wash the fact that in every chapter he used a tactic called poisoning the well. At the beginning he made it quite clear that he was about to disappoint and offend readers. He suggests reading another book if you're not happy with proselytization, he didn't say proselytization, he said "facts" those who are interested in the facts. Only an apologist speaks like that. It's presented in a wishy washy fashion and you then get to the end of the chapters and at the end he finds a way to falsely equivocate the topic with the Bible or scripture or a saint. None of which have any relevance to the topic in the least. At the end I was met with a spiel about how his god did it all and that we should respect god. He makes no apology for the fact that he has book has nothing but the bare bones of the topic and that it was tainted with religious proselytism.

The book should read biodiversity, Jesus did it. Then thrown in the fiction section with the rest of the religious books.

Do not be fooled by the Title

What was one of the most memorable moments of Biodiversity: Bolinda Beginner Guides?

The logical manner in which biodiversity time line is explained

Was Biodiversity: Bolinda Beginner Guides worth the listening time?

no need to bring in the supernatural

interesting enough but after putting together a great argument against the existence of god he bloats on about his own personal belief for a while at the end.

What made the experience of listening to Biodiversity: Bolinda Beginner Guides the most enjoyable?

The story is set out logically and clearly and gives a great overview of all basic aspects off bio diversity. I got this book to get a better understanding of issues involved with this and this one, like most Bolinda guides I have tried, does exactly what it says on the tin.