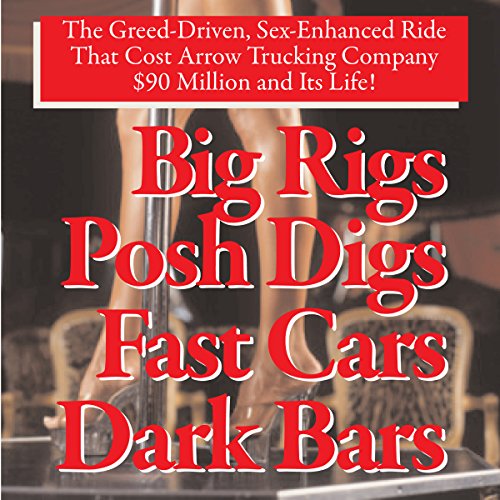 This is the true story of crime and "road rage" in the executive suite of one of America's leading trucking companies. The story begins when the highly regarded founder and owner of the Arrow Trucking Company is killed in a hunting accident. His widow then appoints their only son, Douglas, to be the new CEO. His only qualification is that he is known to be "the apple of his mother's eye". He had no experience in anything. He had only a high school education and had never worked a day in his life. He was best known as a young, wealthy, and very arrogant party boy. He was further described as being an "egotistical jerk". Accordingly, the end of the story is predictable. But, one could not have predicted the shocking events that played out along the way.

At the time of his father's death, the company owned over 1,200 tractors and 1,400 flatbeds, and had negligible debt. The company had more than 1,400 employees. Revenues exceeded $250 million annually, and the company was recognized as a leader in the trucking industry. Eight years later audits showed $8.55 million in assets and $99.97 million in liabilities. It proved to be one hell of a ride.

It didn't take long for "Dougie" to live up to his reputation. His employees soon referred to Doug Pielsticker as "Smug Pigstinker". Respect for this new leader was as impossible to find, as was the leader himself. On his first day on the job he arrived in his chauffeur-driven limousine promptly at 10:45 a.m. It was to become his nearly-everyday starting time. His first task was to clean out his father's office. And, clean-out he did, tossing everything but the furniture, inclusive of all of the family pictures. He was far more interested in his inheritance than his heritage. He was also much more interested in furthering his personal lifestyle. And, he was in the right place. Later audits indicated he trucked out nearly $40 million to his personal accounts in support of his lifestyle.

He then fired nearly all of his dad's management team and replaced them with his own drinking, partying pals. Immediately the downhill ride commenced. With Doug behind the wheel and his pals on board, corporate assets began to disappear. Audits later discovered they had been hauled to the personal accounts of this new CEO and his new-found "partners in crime".

Some of the more entertaining stories within this story include: the gift of a new Porsche to a stripper he just saw perform in a bar; his ensuing marriage to the stripper who leaves him for a television news anchor who was the wife of a prominent Tulsa businessman; his need for in-home help to maintain his closet and change light bulbs; the content of his frequent $80,000 monthly charges to his company issued American Express card; and much, much more.

This is the story behind the news reports that focused on the multiple fraud and RICO filings against the inept management of Arrow Trucking. This is the inside story as it was related to the author by representatives of the more than 1,400 former employees of Arrow Trucking Company. The storytellers are the same people who abruptly lost their jobs, their payroll, and expense checks, and were further left stranded on the highways of North America with fuel credit cards that were no longer any good. The only thing they were told - by in-cab message - was to "leave your trucks where they are and find your way home. Arrow Trucking is no longer in business." As these former employees will tell you, this book recounts what was for them, "one hell of a ride."

A "HOW TO" OF FRAUD AND ABUSE

This is a sad tale of a sociopath one-percent-er (inherited status) and how he rode the most successful flat bed trucking company in America into the ground. In the process, thousands of hard working employees were simply out of luck on their claims for back pay, payroll withholding, healthcare and retirement benefits. Oh yeah, and the US Government was out of millions in corporate income and social security taxes and, while the book doesn't state it, millions in retirement benefit guarantees.

The book is pretty superficial and it's read in an almost gleeful way that I can only think it is meant to be a how-to book for those who want to ruin their own inherited company. If you weren't in favor of limiting CEO benefits before, you will be after reading this.

A good book, but some of it borders on gossip.

Yes. It was a good story that really made you think. Very interesting

The ending sounded bitter and gossipy. Not bad, per say, and it was surprising what happened to the central character.

Would you listen to another book narrated by E. J. Nolan?

Do you think Big Rigs, Posh Digs, Fast Cars, Dark Bars! The Greed-Driven, Sex-Enhanced Ride That Cost Arrow Trucking Company $90 Million and Its Life! needs a follow-up book? Why or why not?

Yes, or at least another chapter after all the events are finally wrapped up.

so unfortunate that a good company went down this way. succession planning is critical for a business.

Can't believe how much money can make you disregard and not care about others .

a compelling story of an evil man. It was told expertly and very to the point.

This plot could have been told in a fabulous way but this author and the reader completely missed the boat. I think every hater of the young company President and his Mom will be thrilled with every single word. For anyone else -- those folks, like me, who didn't have a personal stake in the bankrupted company, this writing hardly qualifies to be called a book.

If the author had done even a tiny bit of investigation and/or consultation with legal minds, i.e., a lawyer), the story could have been riveting. As it is, the author was apparently oblivious to the points that would have cast light on critical information. Or, perhaps the author elected not to go down that route because it would have destroyed his tar and feather mission. Either way, omission of the legalities is damning.

Who would you have cast as narrator instead of E. J. Nolan?

Pretty much anyone else but Nolan, who mispronounced words; and drug on-and-on-and-on-and-on. It was all I could do to continue through his poor voice infliction when he bothered to have infliction. It was nearly monotone. If I ever see him as reader on a book in the future, I definitely will not buy it.

The characters needed to be developed, particularly the targets. I don't know that I would have cut any characters. The book is written targeting a young man who by circumstances not designed by him became the head honcho of the family corporation. The author's intended vindictiveness quickly became apparent, then boring, and finally -- just plain annoying. The author's portrayal of the young company president and his Mom places them in a bad light without mentioning a single positive word about either of them. Really? That style casts doubt on the author's credibility, as well as the authenticity of his perception of facts. The character assassination went on from the beginning to the end. Additionally, there must have been a word count issue because getting through the maze of endless, ridiculous, and worthless detail was a challenge.

Terrible author; terrible reader. A total disappointment of what could have been an outstanding book.