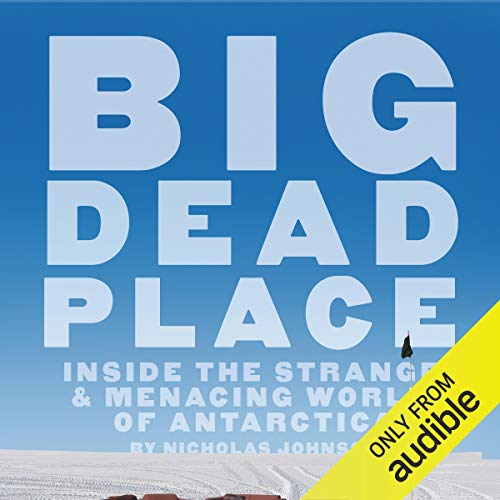 When Johnson went to work for the US Antarctic Program (devoted to scientific research and education in support of the national interest in the Antarctic), he figured he'd find adventure, beauty, penguins, and lofty-minded scientists. Instead he found boredom, alcohol, and bureaucracy.

As a dishwasher and garbage man at McMurdo Station, Johnson quickly shed his illusions about Antarctica. Since he and his coworkers seldom ventured beyond the station's grim, functional buildings, they spent most of their time finding ways to entertain themselves, drinking beer, bowling, and making home movies. The dormlike atmosphere, complete with sexual hijinks and obscene costume parties, sometimes made life there feel like "a cheap knock-off of some original meaty experience".

What dangers there were existed mostly in the psychological realm; most people who were there through the winter developed the "Antarctica stare", an unnerving tendency to forget what they were saying midsentence and gaze dumbly at the station walls. And if the cold and isolation didn't drive one crazy, the petty hatreds and mindless red tape might. Though occasionally rambling and uneven, this memoir offers an insider's look at a place that few people know anything about and fewer still have ever seen.

"Johnson's savagely funny [book] is a grunt's-eye view of fear and loathing, arrogance and insanity in a dysfunctional, dystopian closed community. It's like M*A*S*H on ice, a bleak, black comedy." ( The Times of London)

Would love to meet (communicate with) the author - was there in 78-79 (Erebus) to compare and question and delight in shared memories
Patrick
ardaghp@xtra.co.nz

Excellent representation of day to day life on the ice as a contractor. Since and because of this book, some positive changes have occurred, however the corporate bureaucracy and absolute mismanagement from Colorado is still a normal everyday occurrence. Workers are still held hostage with bonuses if anything the giant saftey apparatus has worsend.

i loved chapter 12 lol. overall a sober, and humorous look at their everyday life

great nostalgic book about the ice

this book is an excellent nostalgic peace or anyone had served at either MCM or NPx. it truly captures what is like to work at these facilities. i know some of the characters that were mentioned in this book. The author goes into tangents that reflect someone who has been in the program a while. If you miss the ice, chapters 1-3 are great. As the book went on, the rating went down for me. Not a bad narrator, I just felt that the author was attempting to shock the listener. I wont listen again.

What would have made Big Dead Place better?

Aaron Abano had a really odd way of reading. I made it to chapter 4 and gave up.

Interested in the story but could get to the end because of the narrator and gave up.