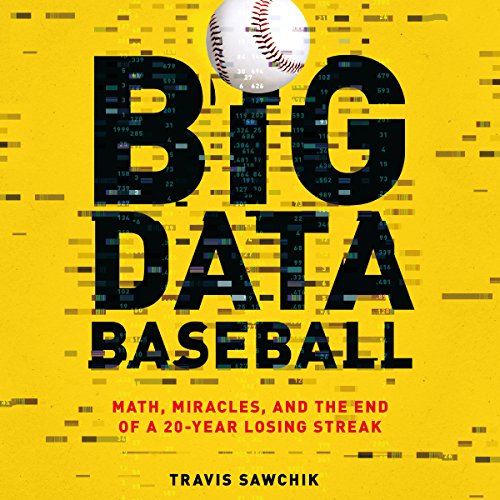 Pittsburgh Pirates manager Clint Hurdle was old school and stubborn. But after 20 straight losing seasons and his job on the line, he was ready to try anything. So when he met with GM Neal Huntington in October 2012, they decided to discard everything they knew about the game and instead take on drastic "big data" strategies.

Going well beyond the number-crunching of Moneyball, which used statistics found on the back of baseball cards to identify market inefficiencies, the data the Pirates employed was not easily observable. They collected millions of data points on pitches and balls in play, creating a tome of reports that revealed key insights for how to win more games without spending a dime. They discovered that most batters struggled to hit two-seam fastballs, that an aggressive defensive shift on the field could turn more batted balls into outs, and that a catcher's most valuable skill was hidden. Hurdle and Huntington got to work trying to convince the entire Pirates organization and disgruntled fans to embrace these unconventional yet groundbreaking methods. All this led to the end of the longest consecutive run of losing seasons in North American pro sports history.

The Pirates' 2013 season is the perfect lens for examining baseball's burgeoning big-data movement. Using flawless reporting, award-winning journalist Travis Sawchik takes you behind the scenes to reveal a game-changing audiobook of miracles and math.

The Science of Baseball Choices

This is perhaps Moneyball 2.0 or Baseball Analytics Updated. Whereas Michael Lewis's 2002 bestseller focused on the offensive side of baseball this one focuses on defense. It includes the esoteric facets of the game like zone ratings, extreme shifts and pitch framing. Sawchik isn't as talented a writer as Lewis and I doubt that a movie based on this book starring Brad Pitt is likely in the future it's still a good read/ listen.

Great Book, Not a Great Read

Would you consider the audio edition of Big Data Baseball to be better than the print version?

No, because the reader mispronounced most of the names in the book. This was jarring repeatedly.

Sawchik's way of teasing out the story, jumping from one puzzle piece to another.

Would you be willing to try another one of Peter Larkin’s performances?

Yes, his voice was pleasant and his reading was solid, aside from the mispronounced names.

I'm not a Pirates' fan. But I loved Moneyball the book and the movie. If you liked Moneyball - then you'll probably enjoy this book. More of the same thing. Different people, different metrics, different situations, but same theme - how to get more wins while having one of the lowest payrolls in the MLB. Even though it is a similar story, the metrics are different (defensive shifts, pitch framing, and 2-seam fastballs are the focus of the metrics) and of course the team and people are different. I still enjoyed it and would recommend this book to anyone who enjoyed Moneyball.

The information was great. The writing was redundant, cliched and prosed-up which was exacerbated by the narrators over dramatic reading. Also names of players were pronounced incorrectly.

I am a baseball fan and a stat geek so this should have been the perfect audio book for me, but every time the narrator mispronounced another name I wanted to rip the speakers out of my car. Please please please make sure you know the players names before you agree to narrate anything having to do with sports.

If you're a lifer like me, the mispronunciations by the reader will drive you to madness. The story of the 2013-turnaround Pittsburgh Pirates is a fantastic model of marrying traditional staff with new-school executive personnel, but the reader of the book should have been primed with at least a remedial lesson in players' names.

What a great book!

After having endured many dismissive comments by various baseball announcers about the value of baseball data and the hidden value that it can uncover, it is refreshing to read that Moneyball was taken seriously by some teams and yielded excellent results.

This book is at once a management book, a change leadership guide, a sequel to Moneyball, and an inspirational story about a team that once broke the heart of this Pittsburgh expat. The book fits is for anyone who appreciated Moneyball by Michael Lewis or The Book by Tom Tango, or any management book about challenging old thinking - and using the old timers to effect the change.

I'm back as a Pirates fan. They are playing to win again.

As an Audiobook, this was perfect. It helped fill the drive time from Chicago to Pittsburgh. The narrator kept me interested.

Interesting and recent enough that most of the individual in the story are still active. I only gave the reader two stars because he mispronounced so many names . A book like this is much better if the reader knows the subject.

This book could be described as a thinking man's version of Moneyball. It is well written, well read, and well paced, with lots of interesting anecdotes and personalities. If you are interested in better understanding the game you'll enjoy this read.

Very interesting book, narrator butchers some people's names. Loved the insight and reasons behind how the Pirates built a winner.