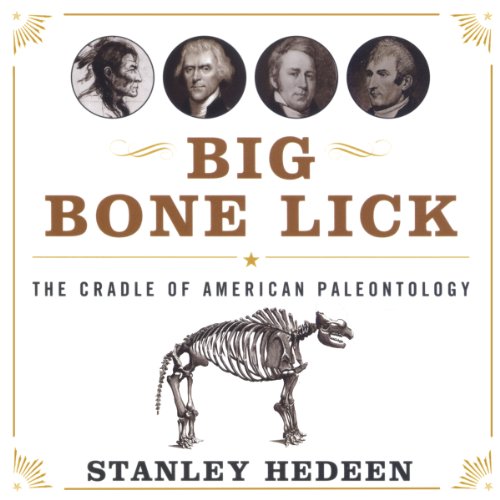 Shawnee legend tells of a herd of huge bison rampaging through the Ohio Valley, laying waste to all in their path. To protect the tribe, a deity slew these great beasts with lightning bolts, finally chasing the last giant buffalo into exile across the Wabash River, never to trouble the Shawnee again. The source of this legend was a peculiar salt lick in present-day northern Kentucky, where giant fossilized skeletons had for centuries lain undisturbed by the Shawnee and other natives of the region. In 1739, the first Europeans encountered this fossil site, which eventually came to be known as Big Bone Lick. The site drew the attention of all who heard of it, including George Washington, Daniel Boone, Benjamin Franklin, Meriwether Lewis and William Clark, and especially Thomas Jefferson. The giant bones immediately cast many scientific and philosophical assumptions of the day into doubt, and they eventually gave rise to the study of fossils for biological and historical purposes. Big Bone Lick: The Cradle of American Paleontology recounts the rich history of the fossil site that gave the world the first evidence of the extinction of several mammalian species, including the American mastodon. Big Bone Lick has played many roles: nutrient source, hallowed ground, salt mine, health spa, and a rich trove of archaeological and paleontological wonders. Natural historian Stanley Hedeen presents a comprehensive narrative of Big Bone Lick from its geological formation forward, explaining why the site attracted animals, regional tribespeople, European explorers and scientists, and eventually American pioneers and presidents. Big Bone Lick is the history of both a place and a scientific discipline: it explores the infancy and adolescence of paleontology from its humble and sometimes humorous beginnings.

“History and science come together in this fascinating story of a woodland salt lick and how the fossil bones found there influenced the beginnings of paleontology in America.” ( Publishers Weekly)
“This is a meaningful read as the world faces climate change and further extinctions.” ( Bloomsbury Review)