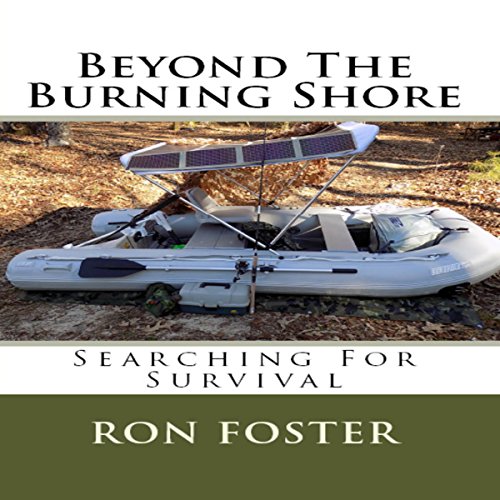 Beyond the Burning Shore: Searching for Survival

Electrical transformers will burn and a smoke filled night will fall with ominous portents when the next mega solar geomagnetic storm hits. Uncontrolled fires will dance and light up the horizon nationwide as crimson and green auroras fill the skies with dread.

Hogan predicts that Atlanta will burn again someday. He knows that the power grid will go down and stay down also some day from the effects of a solar storm EMP. The hero of the story, a business continuity planner has tried to prepare as best he can to escape the city and avoid the nightmare inferno and societal collapse he predicts, but will his preparations be enough?

He and his friend Annie cannot escape by highway because of the horrible snarls of traffic jams and the mayhem of panicked people fleeing the encroaching flames. Perhaps the fires will not be as bad as Hogan thinks. Perhaps what fires that are burning and smoldering can be controlled if the city can keep the emergency diesel generators pumping water for the brave firemen still on duty.

Annie and Hogan live in the same Apartment complex next to the Chattahoochee River. They think that their boats might end up being the key to their survival to escape the city if the fires do drive them out. It is either flee from this shore or fry they decide.

With 24 hours' notice from the Space Weather Bureau, they begin to put a plan together to do just that, bug out by boat! Get out on the river and get away from the chaos! But what then, how will they survive? What will they eat? How will the nation ever have a chance to come back to a modern society after such devastating destructive events destroyed more than just the basic infrastructure? Where will He and Annie end up at once they get out on the water?

The River runs down to Apalachicola Florida but it's not a straight shot, there are white water rapids and Dams and Locks and other things blocking the river to contend with before you reach the safety of the bay.

What listeners say about Beyond the Burning Shore: Searching for Survival

This story is full of great information and is entertaining as well. The narrator does an excellent job of making the caracters real. I love Ron Foster's books because of the information in them and the equipment he mentions in his stories. Even if you are not into prepping you will enjoy this book and dicover new gadgets and gear that you will enojoy or find useful in everyday life.