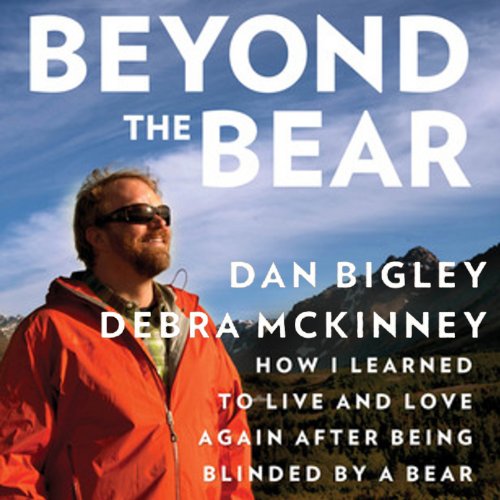 A 25-year-old backcountry wanderer, a man happiest exploring wild places with his dog, Dan Bigley woke up one midsummer morning to a day full of promise. Before it was over, after a stellar day of salmon fishing along Alaska’s Kenai and Russian rivers, a grizzly came tearing around a corner in the trail. Dan barely had time for “bear charging” to register before it had him on the ground, altering his life forever.

“Upper nose, eyes, forehead anatomy unrecognizable,” as the medevac report put it. Until then, one thing after another had fallen into place in Dan’s life. He had a job he loved taking troubled kids on outdoor excursions. He had just bought a cabin high in the Chugach Mountains with a view that went on forever. He was newly in love. After a year of being intrigued by a woman named Amber, they had just spent their first night together. All of this was shattered by the mauling that nearly killed him, that left him blind and disfigured.

Facing paralyzing pain and inconceivable loss, Dan was in no shape to be in a relationship. He and Amber let each other go. Five surgeries later, partway into his long healing journey, they found their way back to each other. The couple’s unforgettable story is one of courage, tenacious will, and the power of love to lead the way out of darkness. Dan Bigley’s triumph over tragedy is a testament to the ability of the human spirit to overcome physical and emotional devastation, to choose not just to live, but to live fully.

What listeners say about Beyond the Bear

This was a great story of strength and love. Dan and Amber have a great love story. It is a story we all can learn from. Both Dan and Amber faced such great challenges and came out stronger!!
I would recommend this book to all ages! The narrator was superb!!

Beautiful! The best ever! Shout out from Haines Ak

I love this book. I love this story. This story came to me at a time when I was struggling. It gave me an incredible insight into trauma and resiliency. This is what being human is about. Pure love and having pure faith even in the worst nightmare of circumstance I can even fathom. I would love to meet dan Bigley, more than anyone else at this time! I live in Haines, Alaska and can see how this could happen to just about anyone. A few of my friends know him! Small world!

Where does Beyond the Bear rank among all the audiobooks you’ve listened to so far?

The best and most interesting. Hard to stop listening.

He was great. His voice was nice to listen to.

This is an inspirational story. It has inspired me to deal with not being able to do the things I use to be able to do.

So much more than a terrifying bear story!

Dan Bigley spoke at my Rotary club recently, and he was such a talented storyteller, I decided to listen to the book. There’s so much more to this book than a terrifying bear tale. It’s also a story of grit, reliance, and the power of love.

Good story but did not enjoy the narrator

I would change the narrator and that is probably all.

Would you be willing to try another one of Kevin Young’s performances?

Probably not. I felt like I was listening to Casey Kasem's American Top 40 for the entire story.