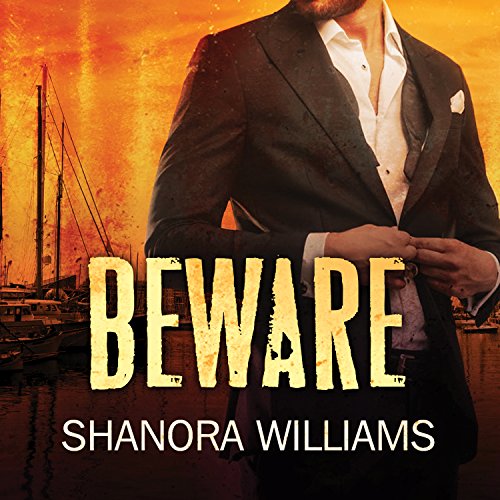 London Stallone hasn't always had the perfect life, but she did have the perfect older brother. He did everything for her. He took care of her when no one else would. He'd always been the shoulder she could lean on, but when he ends up murdered, things take a turn for the worse. London soon demands answers, and the first person she runs to is her brother's coworker and good friend, Donovan "Ace" Crow.

Ace isn't an ordinary guy. He doesn't come equipped with flowers and chocolate. He's strict and only about business, and London believes he's a part of the reason her brother was murdered. Ace doesn't want London to get hurt, and he's promised to protect her. But has he done enough?

What listeners say about Beware

I had a gut instinct that I would love this book/series when I read the published summary & I did...I love it!! Can't wait for Book 2, please Audible, please have book 2 soon!! It's killing me!!

When I bought this book I also knew if I start listening, I would want Book 2 instantly & I do & I regret listening to it (well not really)...

What made me more confident to buy this book is because of the narrator "Shirl Rae" love it when she narrates.

Fingers Cross Book 2 Will Be Up Soon!

I loved the storyline. it was good listening not boring at all. I cried at the end when ace went down. i just knew he would pop up still alive

London was a bit whiny. You don't trust Ace yet you're sleeping with him?? Oh okay...It just seemed a bit silly at times but the sex was steamy. I liked the whole silk and pearls fetish.lol

24 yr old London is about to get her Graduation Diploma when she looks into the audience for her loving brother Jonha who she hadn't seen for quite a while and when she eventually spots his smiling face all she can see is the handsome, charismatic and tattooed business man next to him..... and she was speechless and mesmerised. However, Ace is anything but nice - he's a cold, hard, arrogant and a dangerous criminal who never feels guilt, doesn't suffer from shame and walks away from responsibility.... he says he's called Ace because he's perfect at everything. Jonah is his friend and co-worker and they're only passing through to see London Graduate but things goes tragically wrong with a deal and Ace has to take London away fast and that starts a string of lies, secrets, deception and manipulation of London by Ace..... along with lots of sweaty hot sex.

The trouble I had with this listen was that I couldn't connect with the characters, there was no passion but only manipulation and I didn't feel any romance, chemistry or trust between the H/H. Ace was, most of the way through this listen, a dislikeable Hero until the last few Chapters of the book when, finally, there is some romance rather than cold hard lust and drunken hot sex between him and London. London also annoyed me several times... a Cartel is after her, she witnessed a killing, but her naievity means it took Ace a lot of convincing her to finally comprehend the danger she was in (but of course he had his own secret and greedy agenda for doing this). Also, IMO, she seemed to have a very very short period of mourning. Because I didn't feel the chemistry or any bond between the H/H which meant the raw Alpha domineering hot sex just left me feeling cold. There was however, plenty of angst, suspense, drama, twists, shocking revelations and a lot of mystery surrounding Ace's true motives for helping London. Although this was a very well-written book I just prefer my Heroes to have a little more heart with their heat.

Worth a credit? Dual POV's, narration was good and the final few Chapters had me shocked at the cliffhanger ending and liking the character growth that the H/H went through as Ace eventually opened Pandora's box and let all of his secrets out hoping that London would remain by his side..... but they could never have imagined what trick fate (and some really bad men with guns) would play on them. So I find that I'm actually eagerly looking forward to book 2, The Comeback, because finally there is a chance that that book may hold all the romance that I felt was sadly missing from this one. Looking back on the storyline now, I guess it's creditworthy as a prequal to book 2 and the emotional story that will hopefully follow on from this book.

Liked the Story, Narration was lacking

So I was all into this story. Really good. Entertaining, sexy, suspenseful. It had it all. Really like this authors writing and crazy stories and that is exactly what I got with Beware. Love me some Ace. What I didn't really care for were the narrators. Just didn't like it at all and the male narrator just didn't do it for me at all.

Amazing story, I loved the whole book except the ending. If there wasn't a 2nd book waiting in my library I'd be soooo pissed right now.
Hopefully, The Comeback will be just as fabulous.....and have the ending I want. Lol

I enjoyed reading this book and was very happy when it came out on audible and have enjoyed listening to this book and can’t wait to listen to second book .