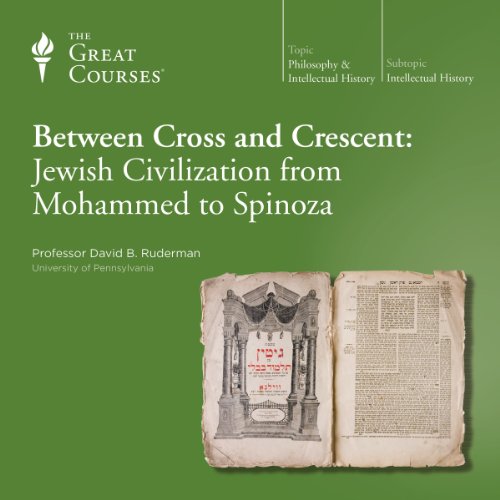 Between Cross and Crescent: Jewish Civilization from Mohammed to Spinoza

Experience the evolution of all of Jewish life during the 10 critical centuries from its rabbinic foundations in late antiquity until the dawn of modernity in the 17th century. During this time, Judaism was forever affected by its encounters with the surrounding social, economic, political, and intellectual environments of both medieval Islam and Christendom.

As a result of those encounters, new pathways of philosophical inquiry and religious spirituality would be formed. The Hebrew language would find new ways of artistic expression. And the role of Jews in the life of the surrounding community would be changed forever, sometimes even increased, as was the paradoxical case in Italy, by the very ghettoization meant to keep them isolated.

These 24 insightful lectures give you a unique perspective from which to examine the three major Western religions as they interact over time, and noting especially their ability or inability to tolerate and even appreciate the "other", as viewed from the vantage point of the Jewish minority. They also feature the emergence of two distinct intellectual threads: the rise of medieval Jewish philosophy and the appearance of Jewish mysticism and piety as the faith's primary expressions of religiosity.

These lectures span an enormous disciplinary range, moving back and forth among history, philosophy, religion, and art. No previous familiarity with Jewish, Islamic, or Christian history is necessary to enjoy this broad and detailed examination of the leading Jewish communities of the period, their political and economic structures, the social relations between Jews and non-Jews, and Jewish cultural and intellectual achievements in a premodern world dominated by two other faiths.

What listeners say about Between Cross and Crescent: Jewish Civilization from Mohammed to Spinoza

This is an area of history which I personally knew little about and had a hard time finding ways to learn about it.

The audiobook is a gold mine in this sense. The professor is eloquent, knowledgeable, and organizes the information in a way which it makes it all easy to understand and digest.

The style-- being a lecture-- is conversational, so I found much easier to listen to than a nonfiction book.

A good introduction on Jewish relations

This book helps clarify how Jews fit (or didn't fit) into Muslim and Christian societies. Some ideas come across as a little surprising, such as how Muslims actually treated them better than European Christians.

I've enjoyed both of Prof. Ruderman's courses available on Audible. It would be very helpful if the course outlines were made available for downloading.

I know a good deal about world history, but I hadn't known as much about medieval Jewish history as I would have liked and this course was an excellent way to fill in some of that gap.

I felt that Professor Ruderman tried very hard to be balanced towards the Jews, Christians, and Muslims throughout the course but I believe he made a misinterpretation of the Gospel of John. He claimed that John's Gospel was different from Matthew, Mark, and Luke in that it was openly hostile to the Jewish people. He claims that when Jesus spoke against people he disagreed with in the Gospel of John that Jesus was speaking against all Jews. I do not agree with his interpretation.

That is my interpretation and while I disagree with Professor Ruderman in this one specific area, I greatly appreciate his work and I am looking forward to listening to more of his courses that are offered through Audible.

Very informative lecture. Jewish history is rather depressing, but you get a strong sense of how resilient Jews are.

Magnificent in all respects

I've been studying history of this area of world for many years. This professor's excitement and mastery of the subject great enhanced my understanding of interactions of cultures existing in this very troubled area

I learned a lot

About a period I thought I knew about. Professor Ruderman is almost, not deep enough for me.

Ruderman is an apologist for Jew Killers

What other book might you compare Between Cross and Crescent: Jewish Civilization from Mohammed to Spinoza to and why?

Living in the House Of Ishmael

Ruderman could stop saying " in another words" and stop excusing the killing of Jews.

Ruderman should not do any more lectures.