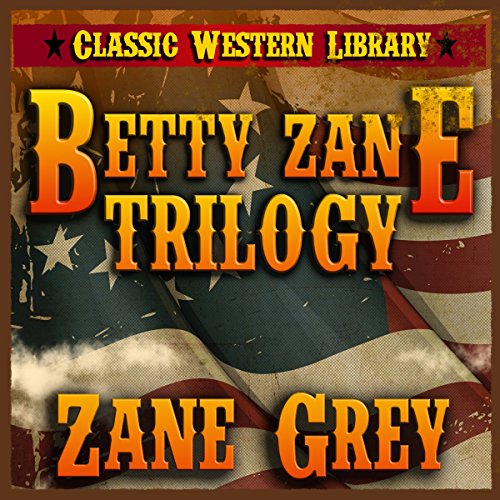 The American West by President Eisenhower's favorite writer comprises of Betty Zane (1903), The Spirit of the Border (1906), and The Last Trail (1909).

Revisit the West with the very first book from best-selling Western legend Zane Grey as he portrays the pioneer life in his own realistic and gritty manner. Although you know this book is a work of fiction, you cannot stop yourself from becoming part of the story and standing with Betty as she fights traitors, pride, and Indians while she makes her way across the plains to be with her beau, Alfred Clarke. Part romance, part fight for your life, edge-of-your-seat action, this is the story of Betty Zane, a pioneer settlement called Fort Henry, and the true American West. The range of emotions you'll feel as you listen to this book will leave you shaking in awe.

Spirit of the Border

Spirit of the Border tells the story of Lewis Wetzel who was determined to destroy the Native American Indians to protect the settlers in the Ohio River Valley. As Wetzel fights to remove the Indian threat, the Moravian Church Missionaries devote their time to converting the Indians to Christianity. As time runs out for the Native American population, two brothers arrive at the border and take two very different paths.

Imagine a new world - a world that has recently been discovered and is as dangerous as it is exciting. The first settlers to the new lands of America were tough pioneers, and the life of a pioneer could be very short. The Last Trail, by multiple best seller Zane Grey, is the classic story of a West still in its infancy. Part romance and all action, embark on a journey through the dangerous plains and mountains as Jonathan, a border man and cowboy, fights to save the beautiful Helen from Indians, and then she fights to save her new lover from himself.

The story may be ok but the Narrator was really bad , he may be new to this as it was so boring. Disappointing

I read these three books many years ago along with most of what Zane Grey has written. I have reread them thru the years and was glad to hear them on tape. Please don't miss the chance to learn valuable history in these and his other books. For instance this frontier was Ohio and the author has family records from which to write his highly descriptive novels. The times take place in the same time period as Washington and the Revolution. The strict instruction/advice under which I was a part of Writing Courses offered was to "cut out" all unnecessary parts from my writing. Pare it down to just what you need. I did not agree with this having read Zane Grey books with all their wonderfully descriptive passages. One thing is common in his writing is when he describes a sunset, a valley, people and so much more, I become part of the story and am "almost" there. If you discard this writer of long ago, you will miss many adventures!

Yes, I managed to plod through the first story, but only because I listen while I drive for work and there was nothing else available. I understand the writing is anachronistic by nature of it being from another century: no contractions, antique expressions. Those are to be expected, but the narration only amplified the feeling that this was a story best left to our great-grandparents. His was a boring, plodding voice without flair. I'm not sure what this series might be like with a narrator talented enough to overcome the stilted speech of this author from another time, but I would like to find out.

The adventure of the Frontier

A wonderful tale of the frontiers men of Ohio and West Virginia. Border fever is contagious!!

Lesson in history of the Ohio Valley

I enjoyed the books as they tell the story of the place in West Virginia wher I grew up. My grandparents often spoke of the Zanes and Girty's. Some of my relatives were there at the time so a personal interest and I enjoyed the book. I agree the narrator was not the best.

Could you see Betty Zane Trilogy: Classic Western Library, Book 5 being made into a movie or a TV series? Who should the stars be?

The narrator has a beautiful voice, but it sounds like he is reading, and not well at that. Lots of pauses where you know he misread something. It reminded me of when we had to read aloud in class, and that one student that couldn't read well... absolutely excruciating.

Dreadful.do not buy this as it is ruined by a reader who does not understand full stops among other things