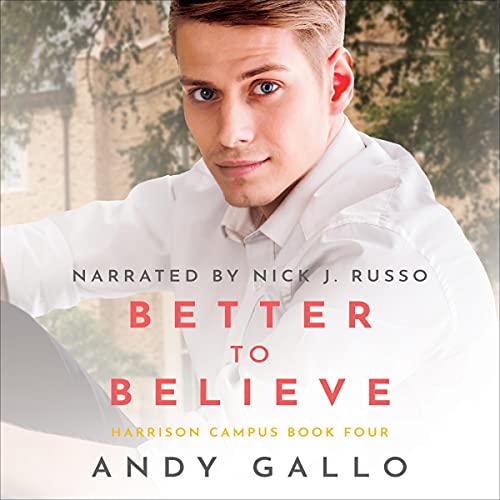 Coury Henderson has wanted to play professional baseball since he threw his first pitch. If he’s drafted, he’s off to Tiny Town, USA, to earn his ticket to the majors. But a freak injury threatens to derail his dream. If that weren’t enough, his graduation is in jeopardy. Physical therapy might solve the first hurdle, but he’ll need a tutor who is aces in science to solve the second.

A tutor like Liam, his best friend’s little brother.

But when did Liam grow up to be such a hottie?

Liam Wright has crushed on his brother’s best friend since he was twelve. He jumps at the chance to tutor Coury and spend time alone together.

Not that anything could happen between them...as nice as Coury is to him, jocks don’t go for nerds.

So why does everything they do feel like a date?

Better to Believe is a best friend’s brother-to-lovers, nerd-jock, slow-burn M/M romance with a guaranteed HEA. This new adult, college age novel can be listened to as a standalone. The Harrison Campus series can be listened to in any order.

What listeners say about Better to Believe

This was another amazing addition to the Harrison Campus series.

Although this can be enjoyed as a standalone, I do recommend listening to the entire series for maximum enjoyment


The romance was a delightful slowburn burn. This was such a wholesome listen overall.

Absolutely loved this one!!

knowing your own heart

So angsty and steamy good!!!!! I liked that neither put put pressure on the other to do what they wanted. Each was selfless and it worked out for the best.. Well meaning Beckett needed some perspective, but he matured. The ending had me melting with all the warm and fuzzies. I voluntarily listened to a free copy of this and am giving an honest review. The narrator did an excellent job bringing the characters and story to life. Very well done.

What a sweet story! I loved the main characters, they felt like real silly, immature college boys. The parties, the banter, the friends, the family, everything in this book was nice to read/listen to. Pops (Liam's grandfather) was the best side character ever!

And Nick J. Russo was perfect!

Thank you for the ARC audio, I voluntarily give this book an honest review. Coury  was a forbidding dream, after all he was his brothers best friend even IF there was no way the studdly jock would see him as anything else. Beckett was his best friend was the loop that repeated throughout his mind.. focus on passing his paleontology class but temption was sitting right here with him. Was it even fair to start something with Laim, when he looking for bigger and better opportunity with his baseball career. Some one is bound to be hurt, but will calmer minds and a breaking heart be a price to steep to pay.
Was Beckett really going to throw away their long time friendship down the drain, after all he wants to protect his baby brother.  Narrator Nick J. Russo makes this  Amazing sweet romantic  and I just LOVE Pops that spunky old fellow was hilarious with his grandkids.

The production for this sweet, slow burn and gentle romance was done beautifully. The smoothly paced, clear, and distinct narration was easy on the ears. No worries about figuring which character was speaking, as Mr. Russo made each individual easy to distinguish. I enjoyed the straightforward banter between the MCs and lost myself quite readily in this well-made production. Mr. Russo’s strong performance definitely added to this story of two young lovers navigating a new relationship, and all the uncertainties that life brings. I highly recommend this audio version of Mr. Gallo’s story and hope you enjoy it as much as I did. Happy listening!

The final installment of the Harrison campus series was perfect. Mr. Gallo’s writing felt stronger, and the characters came to life as the pages passed by. This slow-burn romance had all the good feels needed to make me smile. Liam is someone I can relate to. More reserved and not wishing for confrontation, he has moved off-campus to live with his grandfather. He prefers quiet evenings to frat parties. Liam has always been second fiddle to his larger-than-life brother Beck, who always steals all the attention. The brothers care for each other but they just have completely different personalities. Coury, a top-notch pitcher, is Beck’s best friend who has always felt comfortable hanging out with them. He is sweet and considerate but underestimates his intellectual abilities. Taking a Paleontology class that he really didn’t want is overwhelming Coury. Fortunately, this topic is right up Liam’s alley and he has offered to help tutor him.


The dynamics between the two were very noticeable as they navigated new feelings. I loved both MCs, but I especially cared for the baseball player. Coury has such an easy-going, yet very caring personality. They’re wonderful together, except the future might be challenging for them. This book explores what is the most important thing in life, and sometimes when you think you know where that path might take, a detour turns your life around.

I loved this book when I read it with my eyes and I loved it all over again when I listened to the audiobook. Nick J. Russo is a great audiobook performer and he did another fantastic job on this one.

I can’t think of anything more to say from what I wrote when I read the book so below is my review from back then.

Better to Believe is the last book in the Harrison Campus series and the first one that Andy Gallo wrote without Anyta Sunday. I love Anyta Sunday’s writing but I have to say that I think Andy Gallo did a very fine job on his own with this one. It had the same flavor and feel as the other books in this series and I loved it.

I seem to be reading a lot of “best-friend” stories lately and I’ve really been enjoying them. This one is brother’s best friend but there isn’t a great age different here like in some books; Coury is only a couple of years older than Liam. They’ve known each other for years and Liam tagged along with his brother, Beckett and Coury at various times while they were growing up.

Coury is struggling to keep his grades up in college so Liam agrees to tutor him in a course that he loves and knows he can help. As their sessions go on, Coury finally begins to see Liam in a different light from that of Beckett’s brother. Liam is overjoyed that his long-time crush on Coury may actually turn into something more.

This was a very easy, primarily sweet and low angst read. I loved Liam and Beckett’s “Pop.” Liam went to live with him after some homophobic stuff went down for him on campus. Liam was grateful that his Pop was available to take him in but Pop was also grateful to Liam for helping him get back into life again after his wife died.

The one major stumbling block in Liam and Coury’s relationship was Coury’s dream of playing major league baseball. I loved how that was all resolved. I also loved, loved, loved the epilogue that takes place four years after the end of the main story. This is often my favorite part of a book and Andy didn’t disappoint me with this one; I thought it was wonderful.

I’m looking forward to the spin-off series that Andy is writing next. I’ve found a new author to follow and add to my favorites list. ❤

I was gifted a copy of this audiobook with no strings attached; there was no review required or requested.