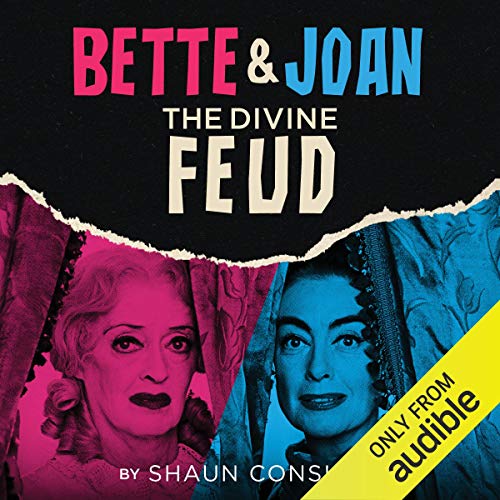 They were two of the most talented beauties Hollywood ever produced: the elegant Joan Crawford, a former chorus girl who shot through the ranks at MGM, and the brash, tempestuous Bette Davis, a Broadway star notorious for refusing to bow to the studio bosses. Their work together in the hit film What Ever Happened to Baby Jane? sowed the seeds for a mutual hatred that would consume their lives. As each fading star tried to outshine the other, lives were upended and reputations were destroyed. Glamorous, merciless, and cruel, their feud became the stuff of legends.

Based on interviews the author conducted with both actresses and more than a decade of research, Bette & Joan shows the hard-drinking, hard-fighting duo at their best and worst. The epic story of these dueling divas is hilarious, monstrous, and tragic. This updated edition includes two new chapters. Bette Davis and Joan Crawford are portrayed by Susan Sarandon and Jessica Lange in the Ryan Murphy TV series Feud.

What listeners say about Bette & Joan

Such a great book with all the juicy details! I personally love the old Hollywood glamour so this was right up my alley. I thoroughly enjoyed it. The Narrator did a fantastic job as well.

Excellent. Especially if you adore the TV Show

This audiobook explores the lives of Joan Crawford and Bette Davis leading up to and after their only time working together on 'What Ever Happened to Baby Jane'. It has everything— salacious details on both stars love affairs and scandals, and tender heartbreaking exploration of their home lives and what led to such ambition. It's a great alone and as a companion to the TV Show, though it does shine light on some of the program's creative licenses. All in all... HIGHLY RECOMMEND.

I've always found both of these women interesting so was looking forward to reading about their lives and connections with each other. Ugh. What I learned is that they were both mean, self-absorbed, spiteful people. They each had a couple of redeeming qualities, but everything was always about THEM and no one else. It depressed me. I just can't recommend it.

What a great book

This audio is so much better than the TV series, which made it an unexpected surprise. I was riveted.

The narrator of this book is EXCEPTIONAL. This is a wonderfully well written book. I enjoyed in immensely.

Well written and researched. Worth the time to read or listen. I'm glad I read this. It changed my opinion of Joan. She wasn't perfect but she wasn't the monster Christina made you believed her to be.

Terrific on all counts

OUTSTANDING narrator makes this juicy book even juicier!! Just consider this a “ditto” to all the other 5 star reviews. Never a dull moment, it starts off big and doesn’t stop. Best part, it’s all backed up by sources and real quotes, nothing made up about this. GET IT!!

Full of Hollywood gossip, some of it trashy, but for fans of Hollywood's &quot;golden era&quot; this will be tremendously entertaining. Great narration by January LaVoy.

Pitch perfect writing delivered by a reader who knew the subjects and at times almost channeled phony Joanie. But in all seriousness it is wonderfully written and very much a story of two titans.

What a FEUD it was!

Where does Bette & Joan rank among all the audiobooks you’ve listened to so far?

So many juicy details about Bette Davis and Joan Crawford.

Loved it. The narrator embodied the personalities of both Bette & Joan really well.

Been watching the TV show FEUD. Couldn't wait to get all the juicy details about the real life feud.

A wonderful insight into a bygone era...

This is easily the best book I’ve ever read about the golden age of Hollywood; the glitz, the glamour, the double-deals and, of course, the feuding. And nowhere was there a greater, more enduring feud than that between the two undisputed queens of Tinsel Town, Bette Davis and Joan Crawford.

Davis, the ‘serious’ actress, with credits and accolades on stage and screen going back decades. Feisty and uncompromising, intense and demanding, arriving on set alone, eating alone, leaving alone; and Crawford, the ‘Movie Star’; glamourous and aloof, pampered and indulged, and always accompanied by her entourage of assistants, stylists, make-up experts and assorted hangers-on. Both of these women were every bit as serious about their status as Queens of Hollywood, and both every bit as prepared to defend that title, whatever it took.

The book follows their individual paths to fame and glory; Davis, slogging it out in small theatre productions in suburban America; Crawford, with the dazzling beauty and dancing skills, working as a chorus girl, all the time looking for the next step up. On the way they both began to develop the hard shell they would need to break the big time. For Davis this became her acid wit and abrasiveness; for Crawford, her beauty and permissiveness became a weapon she would use to get what or who she wanted. And all the time, they kept an ever-watchful eye out for potential competition, which had to be wiped out at the first opportunity. For both of them, being a movie queen wasn’t a job, it was a 24hr, 7 days a week vocation, one which they both played to the hilt.

And then came ‘Whatever Happened to Baby Jane?”

By the time they finally got to work together both women were established A-listers in the Hollywood scene, and by this time had substantial reputations that went before them. The movie world held its breath at what could happen when these two immovable forces met.

Determined not to give the salivating media what it wanted, both artists individually decided to try and outdo each other by being as nice and supportive as possible. Whilst this approach definitely threw the press off-guard, the pressure of keeping this ‘nicey-nice’ act up, day after long day, started to wear the stars down, and tiny cracks started to appear.

The narration, by January LaVoy (Great name btw), is first-class and keeps the listener engaged throughout. Miss LaVoy also has a wonderful way of suggesting the speech patterns of the two stars (Davis very clipped and staccato, Crawford measured and purring) without descending into a full-on impression, which would’ve been distracting.

There are many, many wonderful insights into the golden era of Hollywood, but one of my favourites, which demonstrates how the stars of the day were constantly on their guard against criticism, and ready with a well-aimed putdown, happened when young Crawford is shooting a scene with an older, established actress, whose husband happens to be directing. The older actress is threatened by Crawford’s outfit, and tells Crawford, “If you’re wearing that to impress my husband, don’t bother. He doesn’t like women who dress like circus clowns.”

“No need to worry, Darling,” purrs Crawford, “I’ve never had a problem taking my clothes off for your husband.”

A classic at last available on audio. Faultlessly gossipy text with one of the best narrators. Had stuff to do but this just captivated me. Read it when it first came out and it has improved with age. Viva divas!

Highly recommended to those interested in these Hollywood greats. If you watched the tv show there’s plenty more here to sink your teeth into. Perfectly narrated. A must-listen.

Would you consider the audio edition of Bette & Joan to be better than the print version?

The narrator was excellent, brought the book to life

What other book might you compare Bette & Joan to, and why?

What does January LaVoy bring to the story that you wouldn’t experience if you had only read the book?

The narration was on point

As an Aries woman myself, I have always had a fascination with both Joan Crawford and Bette Davis. This book is a fantastic warts and all tell all about the two Hollywood icons. Very much enjoyed and will definitely be listening again! Highly recommend.

l loved listening to every minute of this fascinating and very well written book. Highly recommended!

Before reading this book, I had vague memories of watching Crawford and Davis in old black and white movies, and had heard something of the bad feeling between the two, but my knowledge was sketchy. This book changed all of that. Anyone who reads it will come away with a clear and detailed picture of the lives of these two incredible women. The author does a great job of portraying the totality of their characters. Neither were likeable, and their behaviour at times was disgusting -particularly to people they could get away with harming. However, reading about their childhoods and the abuse they both suffered was also harrowing. The consequences were unsurprising: mental illness, toxic relationships, substance abuse and - at any rate in the case of Joan Crawford - what looks like sex addiction. Overall, this is a fascinating book, and depicts Hollywood at a time when it was at its most magical.

Fascinating story. shed a great deal of light on this troubled relationship and the individuals involved. If you like old Hollywood definitely worth a read.

A must read / listen

I’ve read and listened to this book over thirty times in the last 15 years and it just keeps getting more enjoyable.

With a compelling book about so many legendary, larger than life characters, January LaVoy brings life, variety, and humour to an enthralling listen!