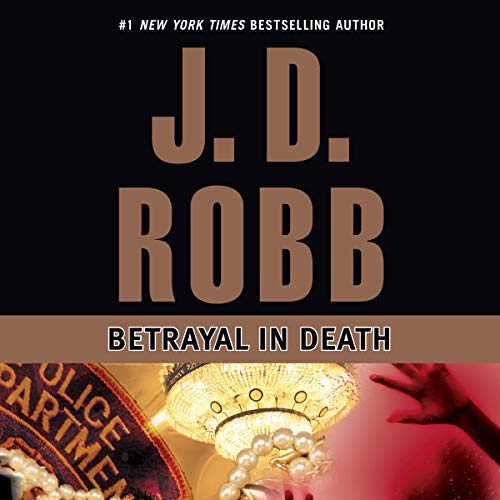 In this novel in the #1 New York Times bestselling series, Detective Eve Dallas' investigation of a homicide at her husband’s hotel leads to a murderer with a passion for the finer things in life - and in death...

At the luxurious Roarke Palace Hotel, a maid walks into suite 4602 for the nightly turndown - and steps into her worst nightmare. A killer leaves her dead, strangled by a thin silver wire. He’s Sly Yost, a virtuoso of music and murder. A hit man for the elite. Lieutenant Eve Dallas knows him well. But in this twisted case, knowing the killer doesn’t help solve the crime. Because there’s someone else involved. Someone with a more personal motive. And Eve must face a terrifying possibility - that the real target may, in fact, be her husband Roarke…

What listeners say about Betrayal in Death

I love the narrator of these books and can't understand why many don't like her. I notice in the next book the reviews complain about her change in reading style and I can't help but wonder if she read some of the reviews and decided to try something new. I have listened to them in order and have grown to love Eve and Roarke and Peabody and McNabb and all the rest. Susan Erickson if you read these reviews, just stick to your style. I love it and feel like I'm putting on a comfortable robe for a good escape into fantasy and adventure when I start a new Eve Dallas book.

I have been going through this series in order and found this book to be one of my favorites. It allows us to see into the characters of the books even more. I love meeting friends from Rourke's past! This book had me guessing until the very end! Great read (or listen).

Would you listen to Betrayal in Death again? Why?

I am an avid reader so for me to purchase an audio of a book that I've read it has to be special. Betrayal In Death is another great audio. I have listened to J.D. Robb's in Death series multiple times and am still entertained by Susan Erickson's characterizations. Out of 44 in Death books with the 45th Calculated in Death due in Feb. 2013, I am rarely disappointed. This one's a keeper!

I have read all the in Death series multiple times and do purchase the unabridged audios of the most interesting reads, this one made the list. Betrayal in Death has a fast paced plot, with lots of investigative action and trademark Eve & Roarke byplay. With a surprising guest Robb gives us another treat into Roarke's interesting past. I love the supporting characters and Robb teases us with more Summerset/Eve interaction. The Feds get involved in this one and Eve kicks butt!

Susan Erickson's interpretation of the text and characters is spot on, she keeps it believable. Erickson must have a multiple personality disorder because I could swear that they 'exist'. Erickson doesn't forget which character she is speaking for and stays within their personality. Great job.

Robb spent a great deal of time with the plot of this crime and it shows, I laughed and cried but to tell you why would spoil the story.

Believe me when I say this audio would be a positive addition to the in Death fans and to those who are new to Robb a great start. If you need to judge my taste, some of my other in Death favs were: Survivor, Treachery, Kindred, Vengeance and New York to Dallas.

This is a story of betrayal on several levels. Magda the actress is auctioning her collectibles, but is betrayed by family. Roarke is betrayed by a childhood friend.
The most memorable part is Roarke calling Eve his one thing that he wanted or needed above all others. I enjoyed how Eve tracked down Yost through the details.
Ericksen again does a great job of narration.

Another great read of Eve Dallas

just as great as all In Death books. I'm forever a fan of this narrator.

I enjoy this book the Narrator is excellent. Well written and I reccomend this book and series. Looking forward to the next one.

I am enjoying listening to the 'In Death' series after having read the series (some books several times) over the years. "Betrayal in Death" is one of my favorites. It still gets me tense and anxious, then laughing out loud as Eve, Roarke and crew share jabs and dark humor. So glad Ms. Robb lightens the really tough scenes every once in a while with the humor. The characters continue to develop and evolve and their relationships deepen, particularly Eve's and Roarke's (and heaven help them, Eve's and Somerset's). As I have come to expect, Ms. Robb's plots are complicated and make me work to follow along. I like a story that keeps me hopping.

Love, love, love the in death series. Good storylines and a narrator who captures each character’s essence.

I am sooo hooked on Eve Dallas (and totally in love with Roark!!) Give me more!

Great story as usual and Susan Eriksen is an exceptional narrator. I love the series.

once again a good read

If you could sum up Betrayal in Death in three words, what would they be?

What other book might you compare Betrayal in Death to, and why?

ANY OF THE IN DEATH BOOK IN THE SERIES

I RECOMMEND ANY OF THIS SERIES