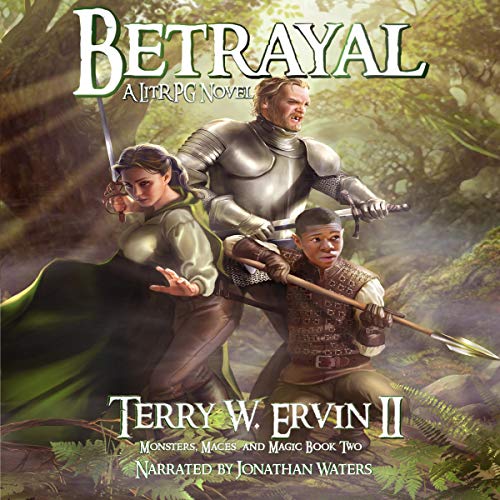 Glenn, a college sophomore, hasn’t gotten used to being a gnome healer, trapped in a world that functions under the rules of Monsters, Maces and Magic. Of course, acclimating isn’t the plan. He, along with the other players drawn into the RPG world in the form of their characters, want to escape and return home.

Stephi, Kirby, Ron, Derek, and Glenn survived their first adventure into the Dark Heart Swamp and are approached to once again enter the dismal marshland. An elf maiden, daughter of a baronet, has been taken captive by a band of goblins, and gold is offered for her rescue.

Gold is needed, not only if the party hopes to escape the game world, but to live and survive its perils. Glenn and his party take the mission, even though they weren’t the first choice. Beyond that, the foul swamp and its evil denizen may not be the greatest danger. A seer warns that their greatest threat lies in betrayal.

Praise for Monsters, Maces, and Mages:

"Exciting and hilarious! It feels like a true game with friends." (Dueling Ogres Podcast)

“As compelling as any table-top or computer RPG, Betrayal’s thrilling action makes you want more; you won’t be able to put it down.” (J. Coon, professor of media studies/advisor to Gaming Club)

What listeners say about Betrayal

just a good story. it's LITRPG as it should be. Good charters on an adventure. they are not OP slaving through everything and they aren't doing stupid things to create adversity. so if you want a good listen this series so far is perfect, just the interesting and entertaining adventuring I want to hear. about to start book three.

Series is definitely one I am enjoyng

I was given this free review copy audio book at my request and have voluntarily left this review. Like with the first book, I thought this was a great fantasy story. Character stats play a larger role in this book, so I would say it sits a bit more firmly in the LitRPG genre now. Jonathon Waters did a great job bringing this book to life with this narration. All in all, this is a really good fantasy story with a mild LitRPG twist. I am definitely looking forward to more in the series.

This was in my opinion even better then book 1! For those who enjoy fantasy lit/rpg, these are the books for you!

I've become a fan of LitRPG, mostly due to books like this one. This one picks up where the last one left off with our college kids still stuck in the game world with no idea how they got there and how to get out. When they are hired to find and rescue an elfin princess, they are given a warning that they will face betrayal. This only serves to drive a bigger rift between the group members, testing their loyalty and resolve. I enjoyed the story a lot and appreciate Waters' narration. His female characters do not seem forced to me and I really appreciate his Kirby. If you liked the first one or are a fan of LitRPG, then give this one a whirl too.

adventure is obviously a dungeons and dragons first edition adventure. The author has introduced a few new ideas to that old system. This makes it very interesting. This adventure evolve around a mission and a mystery to be solved. The game is at foot

My second read from author Terry W. Ervin II. I was given an Audible copy of the third book in this series & wanted to read books 1 & 2 first so I went out & got them. Reminiscent of Joel Rosenberg’s Guardians of the Flame Series this was a well-written entertaining read, looks to be an enjoyable series. On to book 3. (RIP Marley January 20, 2014 - July 24, 2018).

A Fun Adventure, Better than the First!

I found this second volume in the Monsters, Maces, and Magic series more enjoyable than the first. This is due to not needing to establish the background or ‘game mechanics’ and simply gets on with the story. Even if one had not read the first book, ‘Outpost’, it is still an easy tale to quickly immerse oneself in. Betrayal picks right up where Outpost left off, and we find our intrepid adventurers seeking coin to purchase a ‘wish’ spell that can (hopefully) transport them home. Only Kirby, the half-goblin thief, who was a junior high student in the real world and therefore significantly younger than the rest of the party, has stated that he intends to stay. Glenn, the college sophomore, has become slightly more accustomed to being a gnome healer, albeit still very self-conscious about his severe physical limitations. Stephi, the extremely tall and disproportionately buxom elf magic user, deals with the occasional issues brought on by her ridiculously unrealistic appearance, though these are less frequent and not hammered home quite so much as in the first story. One thing I liked about this second volume is the remaining characters, Derek the human fighter and Ron the quarter-elf fighter-druid, are given far more development. Indeed, everyone gets a lot more character depth and personality. Ron becomes far more than the ‘vanilla’ leader of the group. And while Derek is still insufferable much of the time, he occasionally shows traces of decency and becomes more sympathetic. Stephi has also developed far beyond being elven eye candy with an ‘epic chest’. And even though we see everything from Glenn’s perspective, I feel Kirby grows the most, character-wise. As one of the most experienced players of the game in the real world, his knowledge is relied upon heavily. A lot of his growth comes from his still operating on a young teenage mind that has yet to reach full maturity, while dealing with the immense responsibility heaped upon him. He is also the most morally flexible of the story, willing to commit otherwise distasteful acts in order to protect his friends. His race and appearance also continue to cause him grief, very similar to racism seen in the real world. Their quest in this story involves saving an elf maiden, who’s been kidnapped by goblins, and is betrothed to the human son of a prominent silver smith. At first glance, it seems straight out of a Dungeons and Dragons module or typical video game RPG, which is not a bad thing. That said, the story become far less straightforward, with a handful of plot twists keeping the tale an interesting page-turner. I also enjoyed seeing the return of the goblin animal handler they hired in the previous volume. Certain side characters are also given plenty of story, notably Terry, the woodsman, and Jerome, the annoying yet likable man-at-arms, who the party rescues during their search for the elf maiden. Since they are, in essence, in a living game world, the value of NPC’s (non-player character) lives becomes an interesting moral issue for the party. Are they ‘real’ people, or simply props for player interaction, and do their lives actually matter? This is a dilemma which I hope will get more attention in future volumes. Game mechanics still come into play, probably more so than in Outpost, though I find it adds to the story and the self-awareness of the characters. Also, I do not find it irritating at all that the author alternates between using their actual names in narration, versus character names when they’re speaking. It is an interesting dynamic, as they all intend to call each other by their real names, but are unable to do so in this world. Like before, I went with the audiobook version, having become a fan of Jonathan Waters’ style of narration and story-telling. He continues to do what he does best, showing a wide array of voice talents across races, genders, and ages of personas within the story. His vocal abilities mesh well with this series, and I look forward to Volume Three!

Better than the 1st!

Once again Jonathan Waters brought this amazing adventure to life. The characters are starting to aclimate more to the world they've found themselves in and are embracing more of there strengths. They're thinking more and more in terms of stats and gaming rules which means they are finally leveling up. I can't wait to see what twists and turns Terry takes us on in the next book.

Realistic MC’s in a LITRPG

many litrpg’s have seriously overpowered MC’s who popped into the world became total badasses and are immediately the characters of legends. Not so in this group. Welcome to a hodgepodge of characters created for a game and now they are trapped as their avatars and not doing so well at finding a way out of this game. One members dead already (first book) and it looks like more to join the roster if they can’t figure themselves out. A really great series with characters like what we created when we used to play D&D. Really well written and well narrated. Check it out. I was voluntarily provided this free review copy audiobook by the author, narrator or publisher

2nd book even better than 1st book in Series!

I enjoyed this 2nd story more then the original 1st story in this Series and I am looking forward to the next. The group of main characters are people who were sucked into a RPG at the college they attend. They believe that the Gamemaster is the one who got them sucked in, but do not really know how or why.