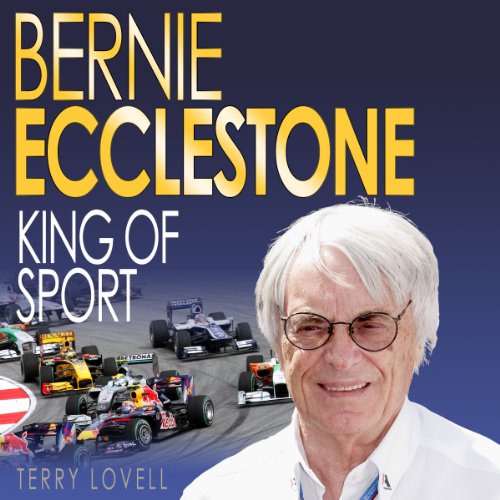 For nearly forty years he has ruthlessly exploited and dominated Formula One motor racing, and now he is setting his sights further afield...This is the true story of Bernie Ecclestone, the street-smart, working-class kid who masterminded the transformation of Formula One from an amateur sport of the fifties into a global billion dollar industry of the 21st century.

Now, with his GBP2.5bn fortune, influence and power, Bernie has moved into the world of football with Renault F1 boss Flavio Briatore to turn Queen's Park Rangers, a struggling west London club, into a serious rival to the capital's glamour club, Chelsea. To many he was the saviour of Formula One, but there are also those who came into conflict with his methods. They have a different story to tell. Bernie Ecclesone, King of Sport reveals the unbridled avarice, callousness and corruption behind the hype of Formula One - and the warts-and-all character of the man who is now making his mark on the beautiful game. This is the true, astonishing story of the single most powerful man in thew world of sport today.

What listeners say about Bernie Ecclestone

This book is by far the worst book I have ever read. The story gets lost in unnecessary detail, and the narrator was absolutely terrible (Siri could have done a better job). I hung-in until about the last 30 minutes (in the hope it might have an interesting ending- it didn't).
Don't waste your money on this one folks.

A good insight into Bernie Ecclestone's life. As an F1 enthusiast, I thoroughly enjoyed this audio book.

Having an audible track that DID NOT sound like a robot. Shocking and completely unlistenable.

Would you recommend Bernie Ecclestone to your friends? Why or why not?

No. Not at all.Why? See above.

Who would you have cast as narrator instead of Norman Gilligan?

Bernie's story is an amazing story and this audio book destroys it.

I am VERY disappointed. Audible should not be selling this sort of crap.

I was hoping for a interesting, insider's look at the rise of Bernie Ecclestone and Formula 1. Instead this book drones on and on with every trivial detail of seemingly each business negotiation of Bernie's career.

gets into the weeds too much

Some of the chapters don't even talk about Bernie. I get a backstory but this was next level stuff.

Who ever wrote this is a glass half empty person

This man is a legend filled with good and bad decisions. The author seems to really put a shank in the bad things and exaggerates outcome. Also example when Bernie signed niki lauda the author writes as if there relationship was shit even though niki was the first driver to have a 1 million dollar contract. Also the fact that when niki left the team is was Bernie that told him your not racing if your retiring at the end of the year and allowed him to leave at the canadian grand prix, the author makes it seem as brahbam was some evil cheater when everyone back then was wrestling for an edge. I like the information in the book but the author seems very biast and almost no understanding of Bernie's personality.

The book was quite interesting but the author seemed to get bogged down in the minutiae of subjects that were best just summerised. An example was the Queens Park Rangers soccer subject right at the end of the book. Totally overdone.

As for the reader - he was really poor. Should consider another vocation.

Interesting story ruined by the narration

I could recommend this book to be read but having tried to listen for the first couple of hours, the narrator just makes me want to scream! Sadly what is a very interesting life story is wrecked by a dull and over punctuated narrator. He sets out and manages very well to pronounce every syllable but this effectively kills any inflection and just gets in the way of the story. Very disappointing and I would avoid this narrator in the future.

If this had only been read by someone who could just talk then it would be a great audio book. Its been made to sound so dull when in fact its a good book!

Within 10 minutes I couldn’t bear to listen further. The narration is robotic and, frankly, a disgrace. Avoid. I have no idea whether the book is any good - the audible version prevented me concluding chapter 1.

I genuinely thought this was done by a low quality text to speech engine. The general lack of emotion in the narration borders on comical.

Great story a little difficulty working your way around the figures. A great business man very ruthless. The narrator speaks a little slow sounds better if speeded up to 1.1

Very interesting story about the enigma of Bernie, but terrible narration by this guy, makes it difficult to get used to.

An interesting story but the narration was appalling.

A potentially really interesting subject absolutely ruined by an awful narration. Sounds like a human voice but with computer-like delivery.

This is the worst narration of an audio book EVER! I seriously wondered if it had been read by a 1980's speak & spell machine. Technically this "book" is dreadful - and don't get me started on the between chapter music that prevents you actually hearing the end of what he's saying. The Chapter numbering is also out of sync. Apparently I'm on chapter 5 according to our alleged narrator, while the screen graphic says I've waded though 7 chapters of this at times, incoherent nonsense. The story is a good one however, Bernie is clearly both a genius & a tyrant, and it's why I've got this far, despite lines being missed or repeated, and despite the in comprehensible timeline that bounces around like a golfball on a motorway. Not sure I can cope with the next 17 hours however... Who produced this ? may they never produce another audio book ... please