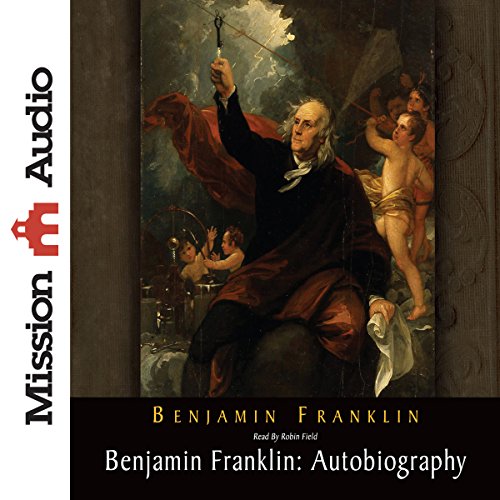 "Be in general virtuous, and you will be happy," advises Benjamin Franklin, and he was a man who lived up to his own words. Franklin’s Autobiography, one of the most regarded works in early American literature, began as a private collection of anecdotes for his son, but was soon transformed from reflective personal journaling into a work of national history. Filled with the inimitable nuances & wit of the inventor, philosopher, scientist and statesman, this engaging narration of Benjamin Franklin’s classic is as certain to delight modern readers as it did with his original audience.

I read Franklin's biography in college and had remembered only the part on self-development from the system he devised. I had decided to start reading more autobiographies and in perusing the first ones that came up under that word I picked this particular version. This book is easily 500 percent more enjoyable and compelling because of the incredible talents of the narrator, who truly channels Franklin in his own way and puts just the right amount of inflection and creativity into the words to make them come alive.

I would recommend this autobiography to anyone, especially those interested in the lives of people who have come from very little and made deep and broad impacts in their communities. Franklin is the epitome of curiosity, commitment to community, empiricism, integrity and pragmatism.

As is noted at the end of this autobiography, his character and works strongly molded the character of America during its founding. To understand his life is to understand the roots of the United States.

Robin Field sounds better than what I would imagine Benjamin Franklin would sound like. He reads with such feeling it's as though he actually lived Franklin's life. Highly recommend.

I enjoyed this book very much. It shows many important things among them being an avid reader. I love the narrator as you could just picture Benjamin Franklin himself speaking.

a must-read for all Americans

listening to this book as I drove across America's Heartland, I was taken aback by the poor nature of our teachings of American history in our schools. Judging by what I've learned here, it was incredibly inadequate when I was a child, now being 64, and having dealt with our current school systems with children's ages 23, 30 and 31, I can only say what they learn now is nearly nothing.

Learn about Ben as a person

This book is an excellent way to learn about Benjamin Franklin as a person and his personal integrity. It also gives you an appreciation for what it was like to live in America back then, the travel time, not paved roads, taking boats to most places.
The autobiography ends prior to 1776, so it does not go into deal about that time, but does show how Benjamin came to be trusted and ended up as part of the Second Continental Congress.
I enjoyed this reading over the other options because the voice made me feel as if an older Benjamin were reading it to me.

I knew he was amazing. and I was still blown away, must reread. thank you

The narration made it seem as if Benjamin Franklin himself was reading it. Recommended highly.

His Recollections up to 1757

He pulls out correspondence from time to time. Pre-Revolutionary years - he focuses on his character through anecdotes.