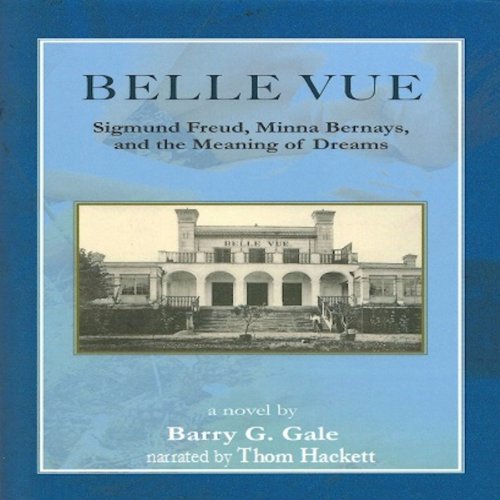 By: Barry G. Gale
Narrated by: Thomas B. Hackett

It is July 24, 1895. Sigmund Freud and his family are staying for the summer at the Belle Vue resort in the Alpine foothills overlooking Vienna. His marriage to his wife Martha is swiftly deteriorating, he is in the midst of a love affair with his brilliant but unpredictable sister-in-law, Minna, his mother-in-law, Mrs. Bernays, despises him, and he has just that morning completed his first full interpretation of a dream, marking a revolution in our understanding of the human mind.

Belle Vue is a novel of that day. It is the story of four people desperately pursuing their own special dreams. Mrs. Bernays is seeking a happy denouement to a life of struggle and hardship and is looking to her son-in-law, Sigmund Freud, to help her achieve that goal, yet he seems more interested in pursuing research on what she considers wild-eyed ideas which have only resulted in ridicule from his medical colleagues. Martha Freud is pregnant with their sixth child.

Unable to appreciate her husband's pioneering research and lacking self-confidence, she is desperate to save her marriage. Sigmund Freud, gifted but prickly and emotionally inaccessible, is hell bent on achieving success. His ideas, however, are rejected by his peers, primarily because of their revolutionary nature, which includes a conviction that dreams have meaning and can serve as a window into the unconscious mind.

Freud finds refuge for his battered self-esteem in the arms of his alluring and intellectually talented sister-in-law, Minna Bernays, a 20th Century "New Woman" who is as different from his Victorian wife as day is from night. Yet Freud has a dilemma. He is caught between two powerful desires - his love for Minna and his quest for fame, and he does not know if he can have both.

What listeners say about Belle Vue